Why Did Abraham Care What We Eat? Food Restrictions in Major Religions - Blog. We often emphasize distinctions between the main Abrahamic religions, but they have something culinary in common: each year Muslims, Christians, and Jews restrict their diets to mimic the fasts of their respective prophets Muhammed, Jesus, and Moses. 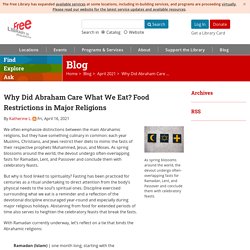 As spring blossoms around the world, the devout undergo often-overlapping fasts for Ramadan, Lent, and Passover and conclude them with celebratory feasts. But why is food linked to spirituality? Fasting has been practiced for centuries as a ritual undertaking to direct attention from the body’s physical needs to the soul’s spiritual ones. Discipline exercised surrounding what we eat is a reminder and a reflection of the devotional discipline encouraged year-round and especially during major religious holidays. Abstaining from food for extended periods of time also serves to heighten the celebratory feasts that break the fasts. With Ramadan currently underway, let’s reflect on a tie that binds the Abrahamic religions: Celebrations - History (2,3) 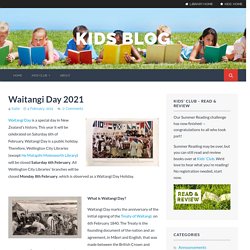 This year it will be celebrated on Saturday 6th of February. Waitangi Day is a public holiday. Therefore, Wellington City Libraries (except He Matapihi Molesworth Library) will be closed Saturday 6th February. All Wellington City Libraries’ branches will be closed Monday 8th February, which is observed as a Waitangi Day Holiday. What is Kwanzaa? - CBBC Newsround. To enjoy the CBBC Newsround website at its best you will need to have JavaScript turned on. 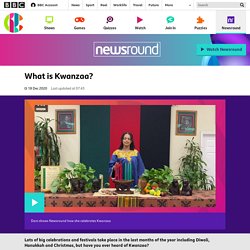 Lots of big celebrations and festivals take place in the last months of the year including Diwali, Hanukkah and Christmas, but have you ever heard of Kwanzaa? Founded by activist and author Dr Maulana Karenga in 1966, Kwanzaa is a festival typically celebrated by African Americans from 26 December to 1 January. The festival's name comes from the phrase 'matunda ya kwanza', which means 'first fruits' in Swahili, a language spoken in a number of East African countries including Kenya, Uganda, Rwanda, Malawi, Burundi and Tanzania.

Kwanzaa is viewed as a celebration of life, and it's a way for members of the African American community to come together and celebrate their roots and culture. Getty Images. Dragon Boat Festival in China. The Dragon Boat Festival (Duanwu Festival, Duānwǔ Jié, Double Fifth, Tuen Ng Jit) is a traditional holiday that commemorates the life and death of the famous Chinese scholar Qu Yuan (Chu Yuan). 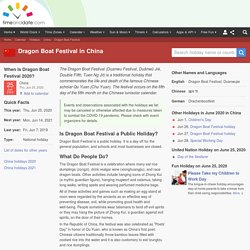 All of these activities and games such as making an egg stand at noon were regarded by the ancients as an effective way of preventing disease, evil, while promoting good health and well-being. Public Life The festival was long marked as a cultural holiday in China. Symbols. Dragon Boat Festival Traditions - Dragon Boat Victoria Inc. - revolutioniseSPORT. Dragon Boat racing has a significantly rich history, with traditional boating in Southern China for over 2000 years. 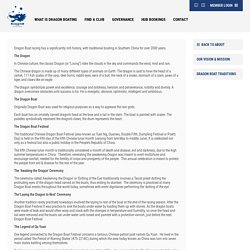 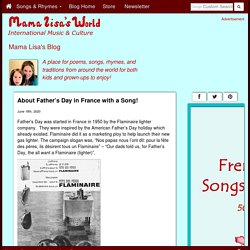 They were inspired by the American Father’s Day holiday which already existed. Flaminaire did it as a marketing ploy to help launch their new gas lighter. The campaign slogan was, “Nos papas nous l’ont dit: pour la fête des pères, ils désirent tous un Flaminaire” – “Our dads told us, for Father’s Day, the all want a Flaminaire (lighter)”.

Laba Festival: Chinese celebrating the Buddhist tradition with congee. In the pre-dawn hours of this coming Wednesday, devotees will gather in the dark kitchen of Nan Tien in Wollongong, the largest Buddhist temple in the Southern Hemisphere, to make congee. 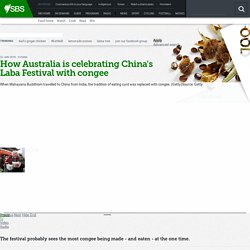 Chinese Mahayana Buddhist temples across Australia will hand out this special congee on the day, a tradition of the Laba Festival, which falls on the eighth day of the 12th lunar month. For devotees, the day commemorates the moment Buddha reached enlightenment under the Bodhi tree, according to Reverend Miaoyou of Nan Tien Temple, which translates to 'paradise of the Southern Hemisphere'. “Buddha was on his last legs in terms of health, and when he went to the river to drink, a shepherd girl gave him some curd,” she says. Mahayana is the largest of the two major branches of Buddhism (the other being Theravada), and is commonly followed in China, Taiwan, Korea, Japan, Tibet, Mongolia and Vietnam, among other places. A congee of eight parts. Traditions from Around the World, how Birthdays are celebrated. Kids News explainer: How Mother’s Day was born.

There are more than six million mothers in Australia and between one and two billion mothers around the world caring for children and other people every day of the year. 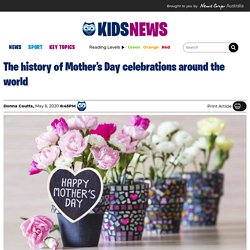 Hopefully they feel appreciated every day, but Mother’s Day is a good annual reminder to say thanks to the mums and other special carers who help us be our best. Celebrating mothers isn’t a modern idea. Why Do We Celebrate International Women's Day? A Look Back At The History. Friday 13th superstitions and history: Why is it believed to be unlucky? - CBBC Newsround. Getty Images. 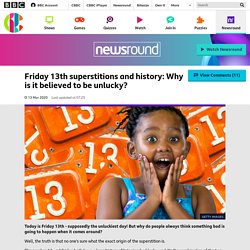 Mardi Gras and Carnival in France. Monique Palomares wrote to me about Carnival and Mardi Gras in France… Carnival is the time between Epiphany and Lent. 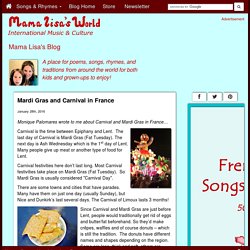 The last day of Carnival is Mardi Gras (Fat Tuesday). The next day is Ash Wednesday which is the 1st day of Lent. Many people give up meat or another type of food for Lent. Carnival festivities here don’t last long. There are some towns and cities that have parades. Since Carnival and Mardi Gras are just before Lent, people would traditionally get rid of eggs and butter/fat beforehand. In some places, children dress up and ask neighbors in the town for eggs, sugar, and flour to make cakes or crepes (similar to pancakes) that are eaten in the late afternoon.

Garma Festival 2019 - Classroom - BTN. KIDS: Welcome to Garma 2019. SIENA: Hi my name is Siena Mayutu Wurmarri Stubbs and I am from Yirrkala in North East Arnhem Land Australia. SHAKIA: Hi I'm Shakia and I'm from St Colombans College Caboolture. Lantern festival lights up the sky in Thailand - CBBC Newsround. What are mooncakes? What Is Bastille Day? If you live in the United States, you probably celebrate Independence Day with fireworks every July 4.

But what if you lived in France? Would you believe you'd do much the same thing…only on July 14? It's true! July 14 is Bastille Day, which is what English-speaking countries call France's annual national celebration. Tasmanian invention fairy bread turns 90. Fairy bread — an Australian invention and the essential* birthday party food of generations of kids — turned 90 this week. Sliced bread, buttered and sprinkled with 100s and 1000s, was first written about on the pages of the Mercury newspaper on Anzac Day 1929. This mention allows Tasmanians to add this sugary treat to a long list of other world-changing inventions claimed by the island state.