Celebrating Holi, India's Joyful Festival Of Colors And Love Kids News Article. India is home to a wide variety of festivals, each of which is celebrated with much gusto. 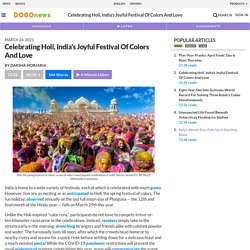 However, few are as exciting or as anticipated as Holi, the spring festival of colors. The fun holiday, observed annually on the last full moon day of Phalguna — the 12th and final month of the Hindu year — falls on March 29th this year. Unlike the Holi-inspired "color runs," participants do not have to compete in five-or-ten-kilometer races prior to the celebrations.

Instead, revelers simply take to the streets early in the morning, drenching strangers and friends alike with colored powder and water. The fun usually lasts till noon, after which the crowds head home or to nearby rivers and oceans for a quick rinse before settling down for a delicious feast and a much-needed siesta! As with most Indian festivals, the myths associated with the centuries-old celebration differ across the country. Resources: Wikipedia.org, Hindustantimes.com, Vice.com. Hindu festival. National Geographic Society. Holi festival: Why people throw coloured powder at each other - CBBC Newsround. India's Holi Festival Welcomes Spring With Vibrant Colors Kids News Article. Though India is home to numerous fun festivals, few are as revered or as widely celebrated as Holi, the festival of colors. 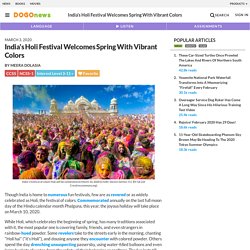 Commemorated annually on the last full moon day of the Hindu calendar month Phalguna, this year, the joyous holiday will take place on March 10, 2020. While Holi, which celebrates the beginning of spring, has many traditions associated with it, the most popular one is covering family, friends, and even strangers in rainbow-hued powder. Some revelers take to the streets early in the morning, chanting "Holi hai" ("it's Holi"), and dousing anyone they encounter with colored powder. Others spend the day drenching unsuspecting passersby, using water-filled balloons and even large buckets of water, from the safety of their balconies or rooftops. The fun lasts till noon, after which the crowds head home or to nearby rivers and oceans for a quick rinse, before settling down for a delicious feast and a well-deserved siesta! Holi Festival - Classroom - BTN. AMULLYA: Hello BTN, my name is Amullya and me and my friends are going to teach you about Holi. 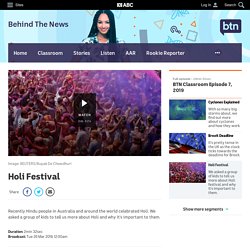 ANUSHAA: In Holi we throw around colours in a symbol of happiness and love. It's a celebration of colours. ARINJAY: What I do is wake up and then worship my god and then we go out and then we buy the colours and we start playing. AMULLYA: It's a festival celebrated by Hindus like me. Hinduism is the third most practiced religion in the world and while it comes from India, there are Hindus all around the world. 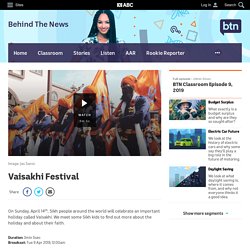 My name is Joypreet. ASEES: I'm Asees. KARN: Hi, I'm Kahn. MANSEERT: Hi, I'm Manseert. PRABHJIT: And I'm Prabhjit. JOYPREET: And we want to talk to you about a really important festival called Vaisakhi. MANSEERT: Vaisakhi is celebrated by the Sikhs all around the world. KAHN: That's us. PRABHJIT: Sikhism is a religion that's been around for centuries. MANSEERT: We live by the principles taught by Nanak and the nine gurus that came after him. ASEES: The teachings of the ten gurus were written down over hundreds of years and make up our holy scriptures.

JOYPREET: Here are the main three principles we live by. MANSEERT: Nam japna: Keep God in your mind at all times. PRABHJIT: Kirt Karna: Earn an honest living. KARN: And Vand Chhakn: To give to those who are less fortunate and basically be good people. ASEES: Did you know there are 24 million Sikhs all around the world? Who-is-goddess-durga- - ABC Education. What is Vaisakhi? - CBBC Newsround. Image copyright Getty Images Vaisakhi - the Sikh New Year festival - is one of the most important dates in the Sikh calendar. 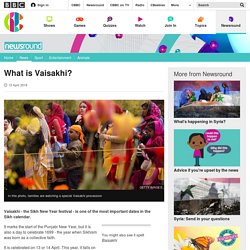 It marks the start of the Punjabi New Year, but it is also a day to celebrate 1699 - the year when Sikhism was born as a collective faith. It is celebrated on 13 or 14 April. This year, it falls on Saturday 14 April. But where did it come from? History of the festival Vaisakhi has been a harvest festival in Punjab - an area of northern India - for a long time, even before it became so important to Sikhs. In 1699, Guru Gobind Singh chose the festival as the moment to establish the Khalsa - that's the collective name given to Sikhs who've been baptised. The story goes that at the festival, he came out of a tent carrying a sword and said that any Sikh prepared to give his life for his faith should come into the tent. What is Durga Puja? Rakhi - Raksha Bandhan 2017.