Why Does Hanukkah Change Dates Every Year? What do you look forward to when the winter holidays approach? 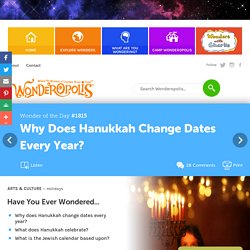 If you're like most kids, you relish the thought of a couple of weeks of vacation from school. You might also look forward to receiving some cool presents. If you celebrate Christmas, then you know the date you'll get to open your Christmas gifts: December 25. If you're Jewish, though, you might need to double-check the calendar to figure out exactly when Hanukkah begins this year. Celebrate Hanukkah With These Fun Traditions Kids News Article.

What is Rosh Hashanah? 1. 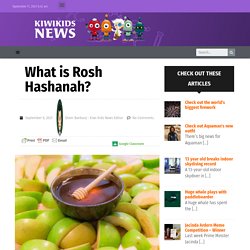 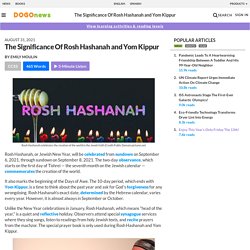 What Is Passover? Here in Wonderopolis, there aren’t many things we enjoy more than a celebration. 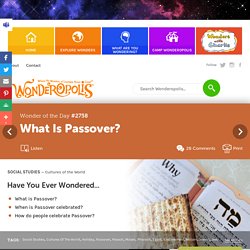 That’s why we love learning about holidays! If you’ve been WONDERing with us for a while, you might already know about Día de Los Muertos. You may have read about Eid and Ramadan. Today, we’re learning about another holiday that’s rich with tradition—Passover! Purim around The World. Our correspondent Joanie Calem wrote us about the Jewish holiday Purim. 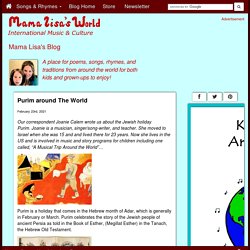 Joanie is a musician, singer/song-writer, and teacher. She moved to Israel when she was 15 and and lived there for 23 years. Now she lives in the US and is involved in music and story programs for children including one called, “A Musical Trip Around the World”… Purim is a holiday that comes in the Hebrew month of Adar, which is generally in February or March. The Jewish Festival of Lights - Blog. The night of Thursday, December 10 begins the Jewish Festival of Lights known as Hanukkah. 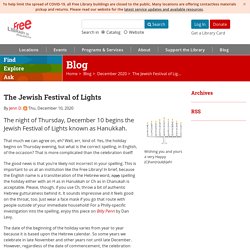 That much we can agree on, eh? Well, err, kind of. Yes, the holiday begins on Thursday evening, but what is the correct spelling, in English, of the occasion? That is more complicated than the celebration itself! The good news is that you’re likely not incorrect in your spelling. Hanukkah, The Eight-Day Jewish Festival Of Lights, Begins On Thursday Kids News Article. At sundown on December 10th, 2020, Jewish families worldwide will commemorate the first night of Hanukkah, by lighting a candle on a hanukkiah or menorah. 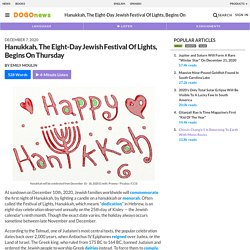 Often called the Festival of Lights, Hanukkah, which means "dedication" in Hebrew, is an eight-day celebration observed annually on the 25th day of Kislev — the Jewish calendar's ninth month. Though the exact date varies, the holiday always occurs sometime between late November and December. According to the Talmud, one of Judaism's most central texts, the popular celebration dates back over 2,000 years, when Antiochus IV Epiphanes reigned over Judea, or the Land of Israel. The Greek king, who ruled from 175 BC to 164 BC, banned Judaism and ordered the Jewish people to worship Greek deities instead. To force them to comply, his soldiers killed thousands of Jews. To fight against the oppression, a Jewish priest named Mattathias and his five sons orchestrated a successful rebellion against the Greek king. Resources: History.com. Video: “Festival of Freedom: 6 facts about the Passover holiday” I’m adding this new video from USA Today to The Best Sites For Learning About Easter & Passover: Related Useful Easter & Passover Videos & Photos Here are new additions to The Best Sites For Learning About Easter And Passover: Here's a video about Good Friday in Jerusalem: In Rio's reimagined Passion Play, drug lords kill Christ comes from CNN. 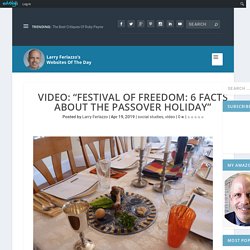 Photos: Easter around the world is from CNN. What is the Jewish festival of Rosh Hashanah? - CBBC Newsround. To enjoy the CBBC Newsround website at its best you will need to have JavaScript turned on. 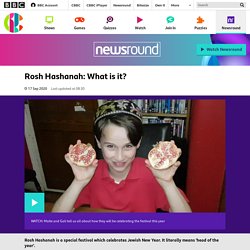 Rosh Hashanah is a special festival which celebrates Jewish New Year. It literally means 'head of the year'. The festival lasts for two days and this year it starts on Friday 18 September. Celebrating Hanukkah, The Jewish Festival Of Lights Kids News Article. What is Passover? Happy Hanukkah! The Eight-Day Jewish Festival Of Lights Begins Today Kids News Article. What is Hanukkah? - CBBC Newsround.

Image copyright AP In the UK, and all around the world, Jewish adults and children celebrate the Jewish festival of lights called Hanukkah. 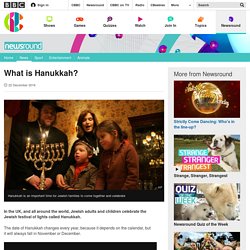 The date of Hanukkah changes every year, because it depends on the calendar, but it will always fall in November or December. Media playback is unsupported on your device It lasts for eight days and might also be called Chanukah. The word Hanukkah means "re-dedication" and celebrates one of the greatest miracles in Jewish history.

Image copyright Getty Images. Can You Erase All Of Your Mistakes? The High Holy Days of Judaism begin with Rosh Hashanah (the Jewish New Year) and end ten days later with Yom Kippur, also known as the Day of Atonement. Jews consider Yom Kippur to be the holiest day of the year. In Hebrew, Yom means “day" and Kippur comes from a root word that means “to cover" or “to hide. " In this way, Yom Kippur has come to mean the day when Jews atone for (make up for) their sins of the past year. Jews believe that God forgives those who repent (feel sorry) and atone for their sins (wrongdoings) against God and others. They believe that repenting and atoning for their sins, and being forgiven by God, allow them to prosper in the new year to come.

What is Yom Kippur? - CBBC Newsround. Image copyright Getty Images Yom Kippur is the most solemn day in the Jewish calendar. It means Day of Atonement and is an extremely important event for many people. But what does it mean and when is it exactly? Find out more below. ABC online education - What is Passover? More info Copyright Metadata © Australian Broadcasting Corporation and Education Services Australia Ltd 2012 (except where otherwise indicated).