Wonderopolis. Today’s Wonder of the Day is about a holiday celebrated by millions of people across the globe. 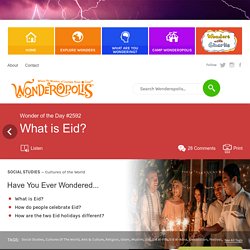 It involves gifts and feasts. It brings friends and families together to celebrate. Have you guessed what we’re talking about yet? That’s right, it’s Eid! In English, the word “eid” means “festival.” Eid al-Fitr happens at the end of Ramadan. Eid al-Fitr translates to “the Festival of Breaking Fast.” The second Eid, Eid al-Adha, comes later in the year. During Eid al-Adha, families who can will often have a sheep or goat butchered. People all over the world celebrate both Eid festivals each year. Do you celebrate Eid? Eid Festival - Classroom - BTN. JOSEPH: Hi BTN, my name is Joseph.AFSA: And I'm Afsa.FAISAL: I'm Faisal.KHADIJA: And I'm Khadija.AFSA: Today we're going to be teaching you about Ramadan and Eid.JOSEPH: Ramadan is a special time in the Islamic calendar.AFSA: Islam is the world's second-largest religion with 1.8 billion followers around the globe. 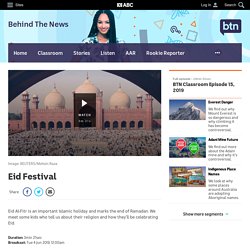 Those who follow Islam are called Muslims.KHADIJA: There are five pillars of Islam, which are rules Muslims follow. Why are there two Eids? - CBBC Newsround. Media playback is unsupported on your device Muslims across the UK will celebrate Eid al-Fitr this weekend. 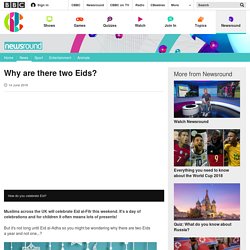 It's a day of celebrations and for children it often means lots of presents! But it's not long until Eid al-Adha so you might be wondering why there are two Eids a year and not one...? Image copyright Getty Images Why are there two Eids? Ramadan: What is Ramadan? - CBBC Newsround. To enjoy the CBBC Newsround website at its best you will need to have JavaScript turned on. 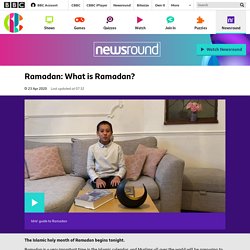 The Islamic holy month of Ramadan begins tonight. Ramadan is a very important time in the Islamic calendar, and Muslims all over the world will be preparing to take part. This year's Ramadan will be a bit different, as the coronavirus outbreak means that many people will not be able to visit friends and family, or their local mosque. This is because of worldwide 'lockdowns' which are helping to stop the spread of the disease.

Read on to find out more about what Muslims traditionally do during this month, and why it is so important to them. What is Ramadan? During the month of Ramadan, Muslims won't eat or drink between dawn and sunset. Fasting is important during Ramadan as it allows Muslims to devote themselves to their faith and come closer to Allah, or God. Fasting is one of the Five Pillars of Islam, which form the basis of how Muslims live their lives. Why does it fall now? Getty Images. Ramadan begins. CARL SMITH, REPORTING: This is the first food 14 year old Ali and his family have had all day. 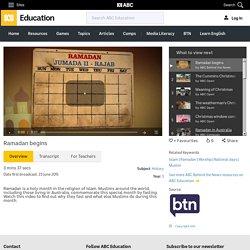 They haven't had anything to eat or drink since sunrise this morning! It's because they're celebrating a special time of year in their religion, called Ramadan. Ali is a Muslim which means he follows the religion of Islam. During the month of Ramadan most Muslim people do something called fasting. That means they don't eat or drink anything between sunrise and sunset for a whole month! They can't even drink water through the day! Ali: It's just to feel how the poor people feel, you know they don't get to have a lot of water and food so that's mostly what it's about. Just like other religions, Islamic people have certain times of the year to celebrate their faith, and Ramadan is one of them.

During Ramadan Muslim people learn more about the Islamic religion by reading from their religious book which is called the Quran, and the fasting is to help them focus on that. Ramadan in Australia. Islam - Festivals. There are only two Muslim festivals set down in Islamic law: Eid-ul-Fitr and Eid-ul-Adha ("Eid" or "Id" means festival). 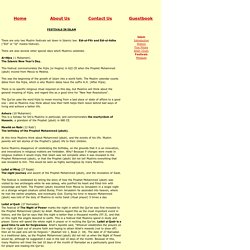 There are also several other special days which Muslims celebrate. Al-Hijra (1 Muharram) The Islamic New Year’s Day. This festival commemorates the Hijra (or Hegira) in 622 CE when the Prophet Mohammed (pbuh) moved from Mecca to Medina. This was the beginning of the growth of Islam into a world faith. The Muslim calendar counts dates from the Hijra, which is why Muslim dates have the suffix A.H. There is no specific religious ritual required on this day, but Muslims will think about the general meaning of Hijra, and regard this as a good time for "New Year Resolutions". The Qur’an uses the word Hijra to mean moving from a bad place or state of affairs to a good one - and so Muslims may think about how their faith helps them leave behind bad ways of living and achieve a better life. Mawlid an Nabi (12 Rabi') The birthday of the Prophet Mohammed (pbuh).