Melting pot: 17 delicious, warming stews – from a Moroccan fish dish to Persian lamb. Stew doesn’t have a poor reputation so much as bad branding. 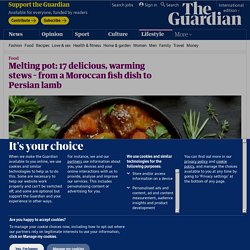 The name itself has an aura of disappointment about it, especially the way my children repeated it back to me, after they asked what we were having and I told them. “Stew!” They would say, with heavy emphasis on the “Ew!” It probably doesn’t help that “stew” shares an etymological source with the word typhus. Untitled. Porridge has long been touted as the most healthy way to start your day. 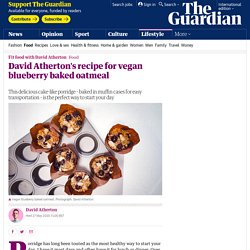 I have it most days and often have it for lunch or dinner. Over the years, I have experimented with every topping and flavour combination you can imagine. In the States, they bake it with sugar and eggs into a cake-like porridge called baked oatmeal. This is not only delicious, but also versatile. I bake mine in muffin cases so I can easily transport and reheat it. Makes 6 muffins. 15g flaxseed meal/milled flaxseed (or 1 egg)40g flaked almonds½ medium carrot160g porridge oats15g quinoa½ teaspoon baking powder½ banana175ml plant-based milk (or dairy if you like)40g agave syrup (or honey)1 teaspoon vanilla extractPinch of salt75g frozen blueberries Add 40ml water to the flaxseed meal to make the flax “egg”.

Lightly grease a muffin tin, or prepare six paper cases. Heat the oven to 200C (180C fan)/400F/gas mark 6. Untitled. This cheesecake is made with tofu, which gives it a nice and creamy texture. 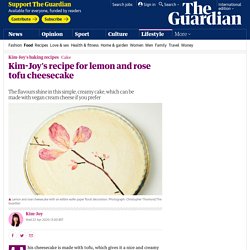 It’s a great option if you have silken tofu in your cupboard, but are short on fresh ingredients such as cream. It tastes different to a standard cheesecake as it is less “cheesy”, but I enjoy both. You can always substitute some of the silken tofu for vegan or dairy cream cheese. I enjoy the simplicity of this version, which lets the lemon and rosewater flavours shine. The edible petal decorations are an optional extra and can be arranged however you like. Serves six to eight. Untitled. » Gâteau matcha, coco et fruits rouges. Du haut de ses six ans, la petite demoiselle ne laisse jamais son doudou bien loin. 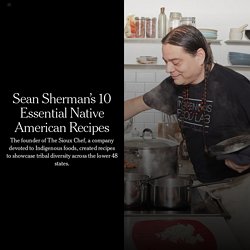 At the age of 18, he witnessed the Lakota and Cheyenne victory against the United States government at the Battle of the Little Bighorn; he also encountered the aftermath of the Wounded Knee massacre, where hundreds of Lakota men, women and children were viciously slaughtered. Later, his children were forced into boarding schools, forbidden to speak their Native language, required to learn English and to become Christians. Chicken Archives. 10 Ingredients to Pair with Roasted Brussels Sprouts. 20 best Middle Eastern recipes: part 4. Anissa Helou’s stuffed mussels – midye dolmasi If there were one street food I could take with me to a desert island, it would have to be stuffed mussels. 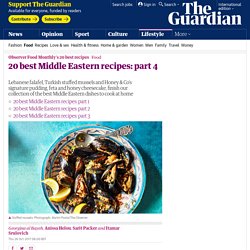 I remember the first time I visited Istanbul in the mid 1970s, I stayed at the Pera Palace, still in its faded glory, spending my mornings in mosques and museums and my afternoons and early evenings in the bazaars. I was on a mission to find the ultimate stuffed mussels. I had never eaten them before and had fallen in love with this elaborate delicacy that was sold so cheaply on the street when it could have been on the menu of a Michelin-starred restaurant. My hotel was just down the road from Çiçek Passajı (Flower Passage), a lovely small market leading into a maze of narrow streets full of charming restaurants. It is not that easy to find mussels that are large enough for stuffing. Put the olive oil, pine nuts and onions in a saucepan and sauté, stirring regularly, until lightly golden. 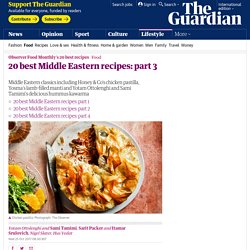 Place the chicken thighs skin-side down in it and sprinkle with 1 teaspoon of salt and the pepper. Keep the fat in the frying pan and add the sliced onions and the other teaspoon of salt. 20 best Middle Eastern recipes: part 2. Claudia Roden’s bell peppers stuffed with rice, raisins and pine nuts – zeytinyağli biber dolmasi This is the classic Turkish rice filling for vegetables to be served cold. 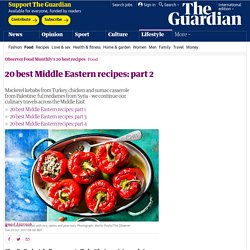 Choose plump bell peppers that can stand on their base. I prefer to use red peppers because they are sweeter and for the colour, but in Turkey green ones are more often used. Serves 6onion 1 large, chopped finelyextra-virgin olive oil 6 tbspshort-grain or risotto rice 250gsalt and peppersugar 1-2 tsppine nuts 3 tbspcurrants or tiny black raisins 3 tbsptomato 1 large, peeled and choppedground cinnamon 1 tspground allspice ½ tspmint a handful, choppeddill a handful, choppedflat-leaf parsley a handful, choppedlemon juice of 1green or red bell peppers 6 mediumnatural (full-fat) yogurt 250g, mixed with 1 crushed garlic clove to serve (optional) For the filling, fry the onion in 3 tablespoons of the oil until soft. Retaining the stalk, cut a circle around the stalk end of the peppers and set on one side to use as caps. 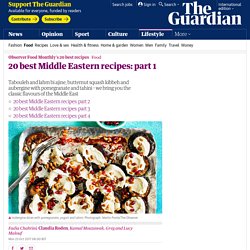 Serve them hot or cold, with the yogurt topping at room temperature. Serves 6aubergines 4 (1.2kg)extra-virgin olive oilsaltpomegranate molasses 1½ tbspred or white wine vinegar 1½ tbspnatural (full-fat) yogurt 500ggarlic 1 clove, crushedtahini 2 tbsppine nuts 50g Cut the aubergines into slices (lengthways or across) about 1¼cm thick. Place them on an oiled sheet of foil on a baking sheet or tray. Mix the pomegranate molasses, vinegar and 2 tablespoons of oil, and brush the aubergine slices with this dressing. VARIATIONInstead of the pine nuts, garnish with the shiny pink seeds of a fresh pomegranate.From Arabesque by Claudia Roden (Michael Joseph, £30)