Steak and Bourbon Gravy by the BBQ Pit Boys. How To Cook Cajun Crawfish Like A Pro 2018 - Step By Step. Chocolate Beer Cupcakes with Whiskey Filling Video. Potato Bombs recipe by the BBQ Pit Boys. Prize Winning Baby Back Ribs Recipe. Pork Tenderloin in Bourbon Recipe. Chinese BBQ Pork (Cha Siu) While I was growing up in the Catskills, the first time I saw this Chinese roast pork [“cha siu” (Cantonese) and sometimes spelled char siu / “cha shao” (mandarin)] was at the Holiday Inn, of all places. 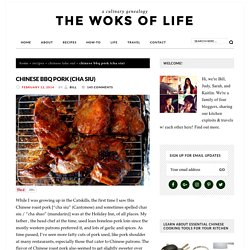 My father , the head chef at the time, used lean boneless pork loin since the mostly western patrons preferred it, and lots of garlic and spices. As time passed, I’ve seen more fatty cuts of pork used, like pork shoulder at many restaurants, especially those that cater to Chinese patrons. The flavor of Chinese roast pork also seemed to get slightly sweeter over time, as I tried more versions in Chinatown’s noodle shops and roast meat restaurants. 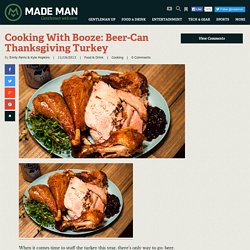 Beer-can chicken is an undisputably manly dish, and a staple at our dinner table in the summertime. You shove a can full of beer up inside a whole animal and let it cook to perfection on the grill — the skin gets brown and crispy and the inside stays juicy and amazingly flavorful. After an hour or so, you have a beautiful and impressive piece of meat that is as pleasing to the taste buds as it is to the eyes. This year, we’re planning to cook our turkey the same way, but on a larger scale (uh, can). To support a turkey, you’re going to need something a little more substantial than a can of beer. Luckily, there’s no need to bust into our stash of craft beer for this, either. 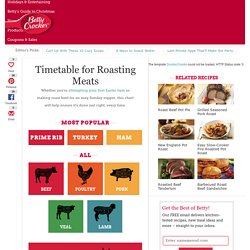 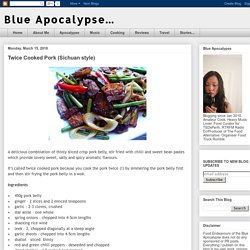 It’s called twice cooked pork because you cook the pork twice (!) By simmering the pork belly first and then stir frying the pork belly in a wok. Ingredients. Char Siu (Chinese BBQ Pork) I must guiltily admit: I know this is wrong. 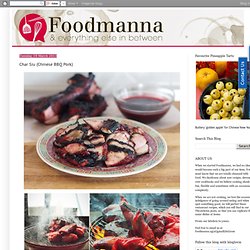 Perhaps craziness got the better of us but we really want to make char siu. When it comes to cooking char siu, the more traditional method of hanging the pork over a charcoal burner or barbecue gives it a greater depth of smoky flavour. Sweet, succulent and insanely delicious – not to mention those “delectable just-burnt bits”. We took out the grill. We are barbecuing indoors again. Barbecue reminded me of my last year in Shanghai. A few months ago, I bought the bodum picnic charcoal grill. Chinese Baked Barbecued Pork Buns Recipe. If you are familiar with dim sum, you may know how delicious Chinese pork buns are. 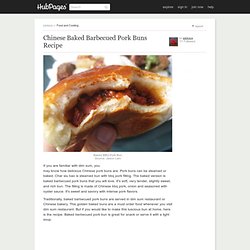 Pork buns can be steamed or baked. Char siu bao is steamed bun with bbq pork filling. The baked version is baked barbecued pork buns that you will love. It's soft, very tender, slightly sweet, and rich bun. The filling is made of Chinese bbq pork, onion and seasoned with oyster sauce. Traditionally, baked barbecued pork buns are served in dim sum restaurant or Chinese bakery. Toffee Sauce with Beer Recipe on Food52. Cooking is more fun with friends. 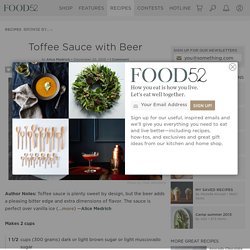 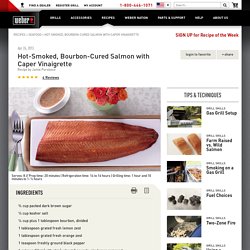 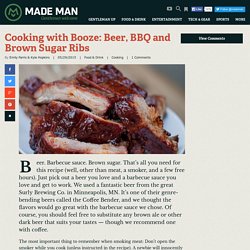 Barbecue sauce. Brown sugar. That’s all you need for this recipe (well, other than meat, a smoker, and a few free hours). Just pick out a beer you love and a barbecue sauce you love and get to work. We used a fantastic beer from the great Surly Brewing Co. in Minneapolis, MN. The most important thing to remember when smoking meat: Don’t open the smoker while you cook (unless instructed in the recipe). Also, notice that the barbecue sauce and beer is done at a 2:1 ratio. Beer, Barbecue Sauce and Brown Sugar Ribs2 slabs baby-back ribs Mustard Your favorite barbecue rub Kosher salt and freshly-cracked black pepper 1 cup your favorite barbecue sauce ½ cup beer Approx. ½ cup brown sugar Rub your ribs with mustard, your favorite barbecue rub, salt and pepper. About an hour before you plan to cook, pull the ribs out of the fridge. Add the ribs to the grill and let them cook for 2 hours. 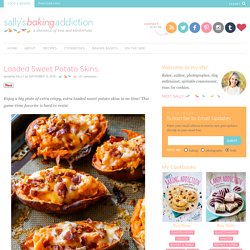 This game-time favorite is hard to resist. Football season is here. One of my favorite times of the year for the main reason being: snacks. Snack foods galore. Blackened Chicken Wings and Blue Cheese Dressing Recipe. The air is crisper. The mornings are sadly getting darker and darker. And there’s a scent of pigskin in the air. No, not cooking. But litterally flying through the air. Baked Chicken Wings with Thai Peanut Sauce. I had a hunch chicken wings might fill the bill. A hunch that these skinless, baked wings (say what? Best Beer, Bacon, and Cheddar Stuffing Recipe-How to Make Beer, Bacon, and Cheddar Stuffing-Delish.com. Chicken Chimichangas. Guinness Glazed Slow Cooker Corned Beef on Closet Cooking. With St Patrick's Day coming up I have been planning my menu and the main course almost always has to be corned beef; it's just so easy to make, it's always tasty and there there are so many different ways to make it!

Bourbon Gingersnap Crusted Ham on Closet Cooking. Whether you are tired of turkey or you are you want a second roast in addition to the turkey you really cannot go wrong with a tasty ham! Ever since I tried this bourbon gingersnap crusted ham by Alton Brown I have been hooked and I keep coming back to it when I am looking for a ham recipe. Like most hams this one is super easy to make where you bake it, pull it out, remove the skin and fat, brush on some mustard, sprinkle on some brown sugar, spritz it with bourbon and then press on the crushed gingersnaps before baking it for a bit longer.

The tangy mustard combined with the sweet brown sugar and the gingery cookies is simply amazing! One variation that I like to do is to bush the ham with some maple syrup before applying the mustard which adds another tasty layer of complexity. Of course one of the best things about a ham is the leftovers, including the bone, and all of the exciting that you can do with them! Check back tomorrow to find out what else is on the plate! Ingredients. How to Make Awesome Pulled Pork.

Chefs and amateur cooks typically have that one recipe that they hold sacred. That recipe defines their style of cooking and is their go-to when providing a bountiful feast for friends, family, potential life partners and everyone in between. Well, this pulled pork recipe is mine. This meal has been taste-tested by some of my toughest critics, and the response has never been short of two thumbs way up. Cooking with Booze: Drunk Turkey.

There are numerous ways to cook a turkey, and our favorite is probably the beer-can method. Of course without a big outdoor smoker, that one’s a little tricky.