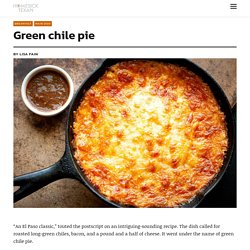 The dish called for roasted long-green chiles, bacon, and a pound and a half of cheese. It went under the name of green chile pie. To be honest, when I first read the ingredients, which also included egg along with salt and pepper, I couldn’t discern how it would be. First, there was no milk involved, so I figured it wouldn’t be like a custard-based dish, such as quiche. Though I also wondered if the green chiles, which were kept intact and layered along the bottom of the pan, would get lost underneath all that dairy. Now, when it comes to community cookbooks, one of my favorites is “Seasoned with Sun,” from the El Paso Junior League. Yet, the book is still firmly rooted in that region of Texas, with many of the dishes calling for an abundance of the area’s native long-green chile. In my refrigerator, there is always cheese, and I had the Cheddar the recipe called for but was out of the recommended Swiss. Green chile meatloaf. Cheese enchiladas: the essence of Tex-Mex.

Tex-Mex is not Mexican food. 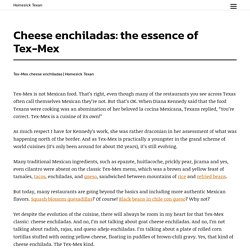 That’s right, even though many of the restaurants you see across Texas often call themselves Mexican they’re not. But that’s OK. When Diana Kennedy said that the food Texans were cooking was an abomination of her beloved la cocina Mexicana, Texans replied, “You’re correct. Tex-Mex is a cuisine of its own!” As much respect I have for Kennedy’s work, she was rather draconian in her assessment of what was happening north of the border. Tamale breakfast casserole. The other day, a friend and I were discussing Texan holiday traditions. 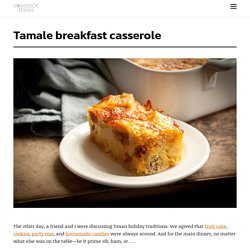 We agreed that fruit cake, cookies, party mix, and homemade candies were always around. And for the main dinner, no matter what else was on the table—be it prime rib, ham, or . . . Thank you for reading! This is a premium post available to subscribers only. Green chile pork posole. Cheesy baked pasta with chorizo. Back when I was learning to cook, one of my favorite combinations was pasta, sauce, cheese, and ricotta. 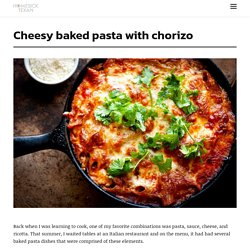 That summer, I waited tables at an Italian restaurant and on the menu, it had had several baked pasta dishes that were comprised of these elements. At the time, I was fond of cheese-based sauces (my mom calls this my white-food phase), and typically I’d combine my pasta with a rich concoction made from Parmesan, cream, and butter. That plus the thick ricotta and heavy pasta made for some decadent eating. I was young and my body could handle . . . King Ranch bean casserole. Mexican Pasta Salad {AKA, Fiesta Pasta Salad!} Chili cheese enchilada casserole. Lakemont chili: Tex-Mex beef and bean stew. Soft cheese tacos. Brisket enchiladas. Chile relleno casserole, El Paso style.

600 calories, based on 6 servings – fauxtudor

When asked to explain, it was said that her food was simple and comforting. 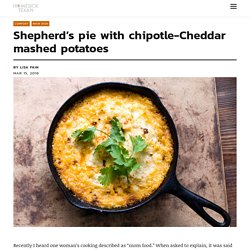 What she served wasn’t complex, but when you ate it you felt loved and secure. Tomato pie with bacon and jalapeños. On my refrigerator is a photo my mom sent me from last Thanksgiving. 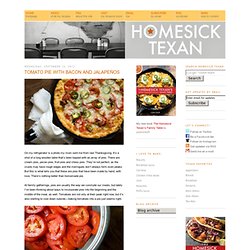 It’s a shot of a long wooden table that’s been topped with an array of pies. There are cream pies, pecan pies, fruit pies and chess pies. They’re not perfect, as the crusts may have rough edges and the meringues don’t always form even peaks. But this is what tells you that these are pies that have been made by hand, with love. There’s nothing better than homemade pie. At family gatherings, pies are usually the way we conclude our meals, but lately I’ve been thinking about ways to incorporate pies into the beginning and the middle of the meal, as well.

Green chile chicken salad. The other day a friend in Texas was telling me about all the Hatch chile items she’d bought at the store on a recent visit. 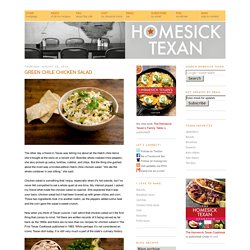 Besides whole roasted chile peppers, she also picked up salsa, tortillas, cobbler, and chips. But the thing she gushed about the most was a limited-edition Hatch chile chicken salad. “We ate the whole container in one sitting,” she said. Chorizo Jalapeño Breakfast Pizza. Chile verde con carne (beef green chili) Like most people, I grew up eating food cooked in a slow cooker. 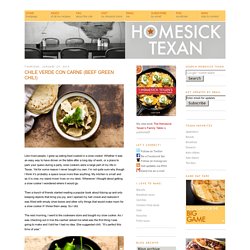 Whether it was an easy way to have dinner on the table after a long day of work, or a place to park your queso during a party, slow cookers were a large part of my life in Texas. Yet for some reason I never bought my own. Mexico in my Kitchen: Enfrijoladas Recipe “Corn tortillas dipped in Bean Sauce” Cooking the comfort food that my mom prepares gets me closer to her even if it is just in my mind, like these “Enfrijoladas”, another dish that is an excellent example of the creativity of our culture: beans, corn tortillas, fresh cheese and some peppers. 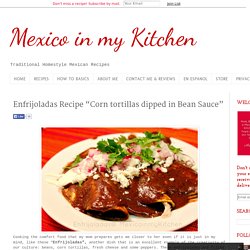 These enfrijoladas are filled with shredded cooked chicken but sometimes are filled with chorizo or just a couple of spoons of crumbled fresh cheese. Black beans or pinto beans? Well, it all depends of what you have at hand. Even thought Black Beans are typical for this type of dish, the kind of bean used varies from region to region throughout the country. Green chile hominy casserole with chorizo. My grandma thinks I am incapable of making any recipe without chile peppers. 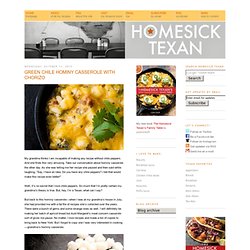 And she finds this very amusing. Take our conversation about hominy casserole the other day. As she was telling me her recipe she paused and then said while laughing, “Say, I have an idea. Chilorio, Mexican Pulled Pork. “What is that incredible smell?” Asked a friend as he walked in the door. I pointed to the stove where shredded pork was simmering in an earthy, spicy sauce made from ancho and guajillo chiles and said, “It’s chilorio. Mexican pulled pork.”

Slow Cooker Mexican Pulled Pork Recipe. Print Photography Credit: Elise Bauer Do you know what a cook lives for? The look in friends’ eyes when they’ve bitten into something you’ve made, and they’re deliriously happy about what they’re eating. Their wide-eyed smiley faces would say, “OMG, WOW,” if they weren’t so busy eating, and wanting to be polite and not talk with their mouths full. That’s the response I got from my friends when I served them tacos with this slow cooked pulled pork.

Of course how could you not love tacos filled with spicy shredded pork?

Tex-Mex sloppy Joe sandwich. The other day, I was in a taqueria eating a sandwich stuffed with a spicy, saucy picadillo that was rich with tomatoes and chiles. It was delicious, but it was also a bit of a mess as the meat kept sliding out of the bun every time I took a bite. Finally, I gave up on using my hands and grabbed a knife and a fork. While I was tucking into the sandwich, it reminded me of something but I couldn’t figure it out. Chile colorado con carne (red chile beef stew) Crispy dogs with bacon-jalapeño dipping sauce. “How you feel about crispy dogs?” Asked a friend from San Antonio. We were discussing regional variations of hot dogs, with my favorite being the bacon-wrapped Mexican hot dogs I enjoy at the Fiesta market by my mom’s house in Houston.

Entomatadas recipe. Molletes with homemade bolillos. Do you love refried beans and cheese? Do you love a crusty yet soft roll? Then allow me to introduce you to a superb Mexican dish: molletes. Earlier this summer, I traveled to Mexico City. It was the rainy season, which means that every afternoon it would rain for an hour or so. Chilaquiles with ancho tomatillo salsa. Chilaquiles Recipe. It will help with the frying if your tortillas are a little dry. Mitch's Chili. Mitch's Black Bean & Sausage Chili Mitch's Tavern in Raleigh already is well- known for its great vegetarian chili, and Mitch's recently added this black bean and sausage version to his menu.

Tex-Mex meatballs in a chipotle-tomato sauce. Sundays in October might be my favorite days of the year. The leaves are starting to put on their annual show, the air is crisp, and there are so many choices on how you can spend your day. For instance, on Sundays you can be lazy and sit on the couch all day reading the paper and a good book; or you can be busy, and visit flea markets and tag sales. You might choose to go to church in the morning and then come home for a Sunday roast; or you might save your eating for later that day when your football team plays a game.

The latter is how many of my friends spend their Sundays this time of year, and it’s always fun coming up with some good game-day grub.