White Australia policy no barrier to Queensland man Billy Sing's World War I feats. He was born William Edward Sing in a small Central Queensland town, but would later become known by many names, including the "Gallipoli Sniper" "Assassin" and "crack shot of the Anzacs. 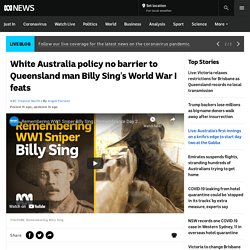 " It was an unlikely fate for Billy Sing, whose part-Chinese heritage initially prevented him from enlisting with the Australian Imperial Force altogether. "That’s not an isolated incident," Veteran and RSL Sunnybank member, Adam Lo, said. Mr Lo, who is also involved with the Chinese Museum of Queensland, said many Chinese Australians would try their luck at different recruitment centres at the time. 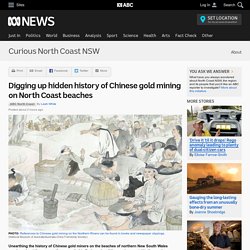 Theresa Gilroy dedicated her archaeology thesis to digging up this little-known past after first learning of it more than a decade ago. "I started to research it and there is very, very little on it at all," she said. The former Southern Cross University researcher said Chinese migrants first appeared on the north coast as pastoral workers on newly established sheep and cattle properties in the late 1840s. Within a decade there were at least six Chinese mining settlements, referred to as Chinatowns, where they built stone and wood structures for washing alluvial gold. "Chinese men were also sand mining at Evans Head in the 1870s and had their camp at Chinamans Beach," she said. 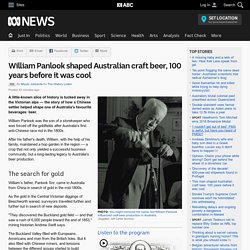 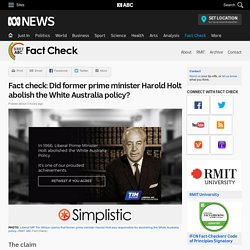 Senator Anning lamented the loss of Australia's cross-party consensus which he said had "recognised the importance of our predominantly European identity", and laid blame for the demise of Australia's European-based immigration program on "the rise of [former prime minister Gough] Whitlam in the Labor party". But Liberal MP Tim Wilson rebuffed that version of history.

Picnic Day 2018 and 2019 - PublicHolidays.com.au. Picnic Day is celebrated in the Northern Territory on the first Monday each August. 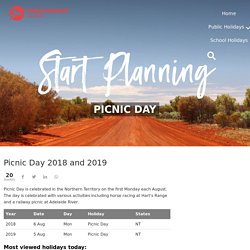 The day is celebrated with various activities including horse racing at Hart’s Range and a railway picnic at Adelaide River. There are a couple of reasons cited as the origin of Picnic Day. During the nineteenth century, a large team of Chinese “coolies” were indentured to help construct the North Australia Railway from Darwin to Larrimah.

In 1889, when 3000 coolies were released from their bond, they were given permission to settle in Australia or to return home. They were also provided with the funds to pay their steamer fare back to China. A new exhibition explores the history and legacy of the anti-Chinese race riots at Lambing Flats. Posted about 4 hours agoFri 20 Jul 2018, 10:10pm On the frosty morning of Sunday June 30, 1861, a crowd of between 1,000 and 3,000 men marched through the Burrangong goldfields (now the New South Wales town of Young) with a brass band in tow. 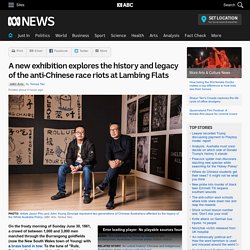 To the tune of "Rule, Britannia! " they brandished flags with the bloody scalps and pigtails of Chinese men affixed as trophies. White Australia Policy: Documents reveal personal stories of life under Immigration Restriction Act. 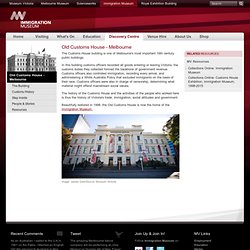 In this building customs officers recorded all goods entering or leaving Victoria; the customs duties they collected formed the backbone of government revenue. Customs officers also controlled immigration, recording every arrival, and administering a White Australia Policy that excluded immigrants on the basis of their race. Customs officers were also in charge of censorship, determining what material might offend mainstream social values. Working Man's Paradise? Working Man's Paradise? THE PROCESS The administrative process of becoming a nation was a very drawn out affair. 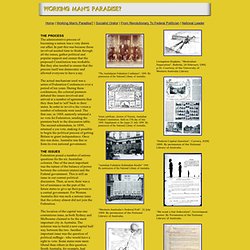 In part this was because those involved needed time to think through all the issues, gather political and popular support and ensure that the proposed Constitution was workable. But they also needed to ensure that the process itself was democratic and allowed everyone to have a say. Working Man's Paradise?

Australian Immigration Fact Sheet 8. Abolition of the 'White Australia' Policy. On this page. 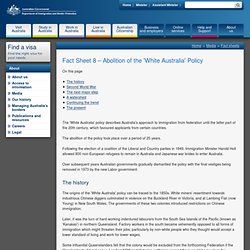 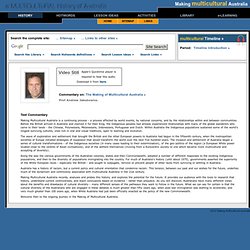 Download it from here. Text Commentary Making Multicultural Australia is a continuing process - a process affected by world events, by national concerns, and by the relationships within and between communities. Before the British arrived in Australia and claimed it for their King, the Indigenous peoples had already experienced relationships with many of the global wanderers who came to their lands - the Chinese, Polynesians, Melanesians, Indonesians, Portuguese and Dutch. Within Australia the Indigenous populations sustained some of the world's longest surviving cultures, ones rich in oral and visual traditions, open to learning and evolution. Invisible Australians: Living under the White Australia Policy. White Australia policy. This badge from 1910 was produced by the Australian Natives' Association, comprising Australian-born whites. Prime Minister Alfred Deakin was a member. It shows the use of the slogan "White Australia" at that time.[1] The term White Australia Policy comprises various historical policies that intentionally favoured immigration to Australia from certain European countries, and especially from Britain.