WWI veteran's niece turns 100 as family marks sacrifice and legacy of Fryer brothers. John 'Jack' Fryer was a 19-year-old scholarship student from a tiny town in Queensland when he went to face the horrors of World War I alongside his three brothers. 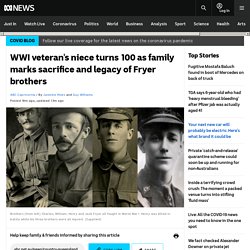 Key points: John 'Jack' Fryer studied at the University of Queensland, but left to fight in World War I soon after starting his first term He returned in 1919, but later died of tuberculosis caused by gas attacks On Remembrance Day, Mr Fryer’s eldest living relative, his niece, turns 100 A first-year university student, Fryer would inspire the creation of a prestigious Queensland library that was now home to one of Australia's greatest literature collections. His family's story, featuring four brothers sent to battle, like many others was marked by the tragedy of the war.

Like many Australians, the Fryer family gather annually on Remembrance Day to remember the contributions Jack, William, Charles and Henry Fryer made during Australia's WWI campaign. However, November 11 will be extra significant for the Fryer family this year. Diary of a WWI German internee who spent time on Bruny Island provides rare insights. In August 1914, news of war trickled down to a German logging ship docked at one of Australia's southern most tips. 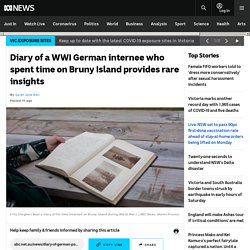 The Oberhausen was stationed at Port Huon, south of Hobart, and its crew was certain the English would confiscate their ship. "We young hot heads were all in agreement … but the master of the ship was against it. " WWI badge found by a metal detectorist in Tasmania's highlands reveals a mother's 'tragic' story. Soldier settler success story carved out of the rainforest of north Queensland. The Maria Creek Soldier Settlement started as a dream for returned servicemen, to heal the wounds of World War I and start afresh in a new place. 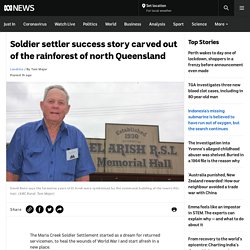 Now, 101 years from its foundation, the town of El Arish is a monument to that vision and a symbol of one of the few successful soldier settlement schemes. Key points: Soldier settlers at El Arish worked to clear near-impenetrable rainforest to grow sugarcane.The town's pride in its soldier origins lives on to this day.Unlike many failed soldier settlements, good prices and strong camaraderie helped El Arish succeed. David Benn, 82, said his father Percy's journey from the battlefields of the Western Front to growing sugarcane at El Arish, 100 kilometres south of Cairns, was one that helped him to recover from the traumatic conflict.

"He got involved with the RSL, which was very well-attended, Anzac Day was a big one, I do think he got a little bit of easing off of what he brought home from France. " Carved from the scrub. Annie Ransley's brother, husband and son all went to World War One. Only one returned. Updated about 3 hours agoFri 24 Apr 2020, 10:59pm When the Great War begins for the British Empire in August 1914, Annie's brother Charles Leer is one of the first to enlist. 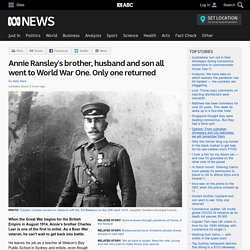 As a Boer War veteran, he can't wait to get back into battle. He leaves his job as a teacher at Watson's Bay Public School in Sydney and enlists, even though his wife Rosabella is gravely ill. Rosabella dies two weeks before Charles sets sail for the war, leaving their teenage daughter Zillah in the care of family friends in Parramatta. Charles lands on Gallipoli with the 3rd Battalion on April 25, 1915. WWI diary returned to Tasmanian soldier's family 102 years after going missing. Updated about 2 hours agoTue 23 Apr 2019, 10:40pm From the muddy battlefields of France, to a home in Victoria, a tiny war diary has finally been returned home to Tasmania — 102 years after it was lost. 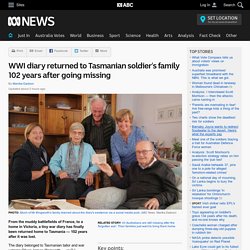 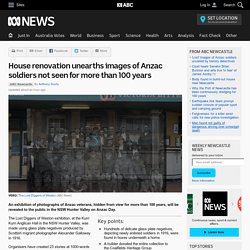 Key points: Hundreds of delicate glass plate negatives, depicting newly enlisted soldiers in 1916, were found in boxes underneath a homeA builder donated the entire collection to the Coalfields Heritage GroupThe Lost Diggers of Weston exhibition will run at the Kurri Kurri Anglican Hall from April 25 The Lost Diggers of Weston exhibition, at the Kurri Kurri Anglican Hall in the NSW Hunter Valley, was made using glass plate negatives produced by Scottish migrant photographer Alexander Galloway in 1916. Organisers have created 23 stories at 1000-words each to be displayed alongside some of the 60 images, drawn from painstaking research at the Edgeworth David Memorial Museum in Kurri Kurri. 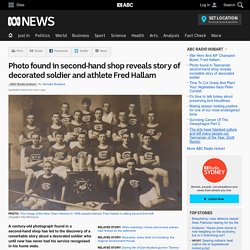 Fred Hallam was an Australian Imperial Force boxing champion who fought at Gallipoli and in France in WWI. He received a medal for bravery and went on to serve on the home front during World War II. The framed image that helped reveal Hallam's story was discovered by ABC Radio Hobart producer Paul McIntyre and depicted a group of athletes from Hobart. "There was just something about Fred which seemed to stand out," Mr McIntyre said. "Putting a name to the face was one thing, but then to learn of his achievement in the international boxing ring and on the field of battle was completely unexpected. " The men were identified as the 1906 New Town Harriers, and a second photo in an athletics club's archives helped Mr McIntyre to identify Hallam.

The Queensland town that lost a generation in World War I, bonded by tragedy 100 years on. Posted about an hour agoSat 3 Nov 2018, 11:07pm A tiny community in Queensland's Scenic Rim bears a largely unknown story of terrible sacrifice made 100 years ago, where almost every family paid a price. 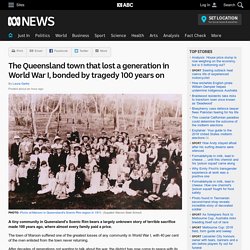 The town of Maroon suffered one of the greatest losses of any community in World War I, with 40 per cent of the men enlisted from the town never returning. After decades of generations not wanting to talk about the war, the district has now come to peace with its past. Gas Attack Clip.mov. History - World Wars: Australia in World War One. WWI Trench Warfare. In Their Own Words : ANZACs of the Western Front. Diary of a Gallipoli soldier. Boy Soldiers of WW1. War diary chronicles WW1 soldier's life.