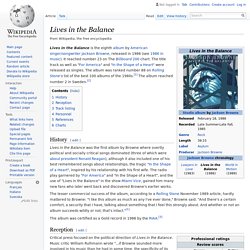 It reached number 23 on The Billboard 200 chart. The title track as well as "For America" and "In the Shape of a Heart" were released as singles. The album was ranked number 88 on Rolling Stone's list of the best 100 albums of the 1980s.[1] The album reached number 2 in Sweden.[2] History[edit] Lives in the Balance was the first album by Browne where overtly political and socially critical songs dominated (three of which were about president Ronald Reagan), although it also included one of his best remembered songs about relationships, the tragic "In the Shape of a Heart", inspired by his relationship with his first wife. The album was certified as a Gold record in 1986 by the RIAA.[3] Reception[edit] Critical press focused on the political direction of Lives in the Balance. 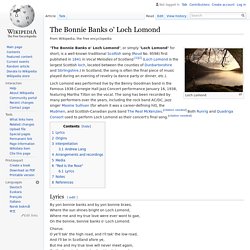 In Scotland, the song is often the final piece of music played during an evening of revelry (a dance party or dinner, etc.). Loch Lomond was performed live by the Benny Goodman band in the Famous 1938 Carnegie Hall Jazz Concert performance January 16, 1938, featuring Martha Tilton on the vocal. The song has been recorded by many performers over the years, including the rock band AC/DC, jazz singer Maxine Sullivan (for whom it was a career-defining hit), the Mudmen, and Scottish-Canadian punk band The Real McKenzies. DON'T LET IT BOTHER YOU from "The Gay Divorce" 1934 film - Lyrics - International Lyrics Playground. DON'T LET IT BOTHER YOU from "The Gay Divorce" 1934 film Harry Revel (m) Mack Gordon (l) 1934 as rec by Thomas "Fats" Waller & his Rhythm Aug 17th 1934 New York "Oh what's de matter wid you?) 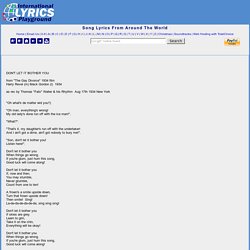 Use Me Tab (ver 2) by Bill Withers. I Believe When I Fall In Love Chords by Stevie Wonder. Bankers Blues Tab by Rory Gallagher. Tattood Lady Chords by Rory Gallagher. BRUCE SPRINGSTEEN LYRICS - State Trooper. New Yersey Turnpike ridin' on a wet night 'neath the refinery's glow, out where the great black rivers flow License, registration, I ain't got none, but I got a clear conscience 'Bout the things that I done Mister state trooper please don't stop me... 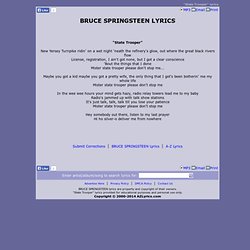 Maybe you got a kid maybe you got a pretty wife, the only thing that I got's been botherin' me my whole life Mister state trooper please don't stop me In the wee wee hours your mind gets hazy, radio relay towers lead me to my baby Radio's jammed up with talk show stations It's just talk, talk, talk till you lose your patience Mister state trooper please don't stop me Hey somebody out there, listen to my last prayer Hi ho silver-o deliver me from nowhere BRUCE SPRINGSTEEN lyrics are property and copyright of their owners. "State Trooper" lyrics provided for educational purposes and personal use only. Cant Help Falling In Love With You Chords by Elvis Presley. 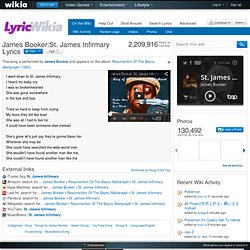 James Infirmary,I heard my baby cry.I was so brokenheartedShe was gone somewherein the bye and bye. Tried so hard to keep from cryingMy tears they fell like leadShe was all I had to live forIt could have been someone else instead She’s gone let’s just say they’re gonna bless herWherever she may beShe could have searched the wide world overShe wouldn’t have found another man like me,She couldn’t have found another man like me. Letter Chords by Joe Cocker. Public Domain Blues Songs. What is a Public Domain song? 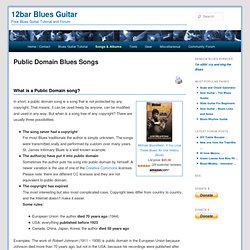 In short, a public domain song is a song that is not protected by any copyright. That means, it can be used freely by anyone, can be modified and used in any way. But when is a song free of any copyright? There are usually three possibilities: The song never had a copyright For most Blues traditionals the author is simply unknown. Examples: The work of Robert Johnson (1911 – 1938) is public domain in the European Union because Johnson died more than 70 years ago, but not in the USA, because his recordings were published after 1922. Sometimes the music is public domain, but the lyrics are not.

Please note that – although this list is made with great efforts to include most accurate information – I can not guarantee that all songs listed here are public domain in your country! To get an idea of the song, you might try a YouTube search, most songs can be found in different versions there. Additional Links Song list 44 Blues (Forty-Four) Ninety Nine Blues Candy man. Steely Dan - ( With A Gun tab ) Modern Times: Someday Baby. Words and music Bob Dylan Released on Modern Times (2006) and in an outtake version on Tell Tale Signs (2008) Tabbed by Eyolf Østrem Album version It sounds like the main lead guitar might play with a capo on the 6th fret, but it might as well be played uncapoed; these are all standard blues licks that any decent guitarist should be able to play anywhere on the neck. 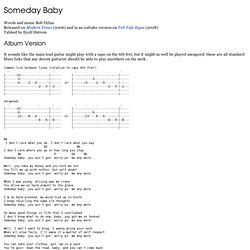 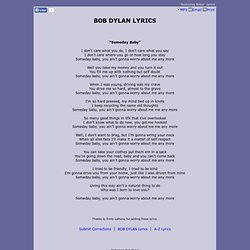 Wilco - Jesus, etc. Tabs, Chords. All The World Is Green Tab by Tom Waits. TOM WAITS LYRICS - All The World Is Green. I fell into the ocean When you became my wife I risked it all aganist the sea To have a better life Marie you're the wild blue sky And men do foolish things You turn kings into beggars And beggars into kings Pretend that you owe me nothing And all the world is green We can bring back the old days again And all the world is green The fase forgives the mirror The worm forgives the plow The questions begs the answer Can you forgive me somehow Maybe when our story's over We'll go where it's always spring The band is playing our song again And all the world is green. 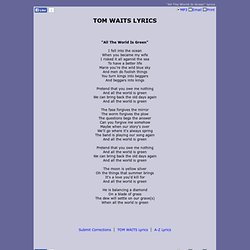 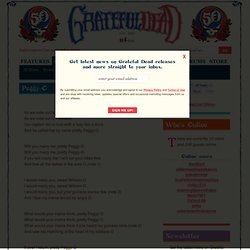 Steely Dan - ( With A Gun tab ) The Lonesome Death of Hattie Carroll. Words and music Bob Dylan Released on The Times They Are A-changin' (1964) and on Biograph (1985) and in live versions on Live 1975 (2002) and Live 1964 (2004) Tabbed by Eyolf Østrem Capo 4th fret (sounding key E major). Live 1975: no capo In most live renditions, he ends each phrase of the verse with a G chord. The place marked with *) is often embellished with the following figure: C Am Em William Zanzinger killed poor Hattie Carroll C Am Em With a cane that he twirled around his diamond ring finger C Am Em At a Baltimore hotel society gath'rin'.