5 Easy Listening Games for ESL Beginners. Songs For Children - help children learn English. We started to have so many songs that were suitable for younger learners that we made this separate section only for those songs. 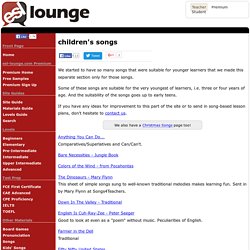 Some of these songs are suitable for the very youngest of learners, i.e. three or four years of age. And the suitability of the songs goes up to early teens. If you have any ideas for improvement to this part of the site or to send in song-based lesson plans, don't hesitate to contact us. We also have a Christmas Songs page too! Anything You Can Do...Comparatives/Superlatives and Can/Can't. Bare Necessities - Jungle Book Colors of the Wind - from Pocahontas The Dinosaurs - Mary FlynnThis sheet of simple songs sung to well-known traditional melodies makes learning fun.

Down In The Valley - Traditional English Is Cuh-Ray-Zee - Peter Seeger Good to look at even as a "poem" without music. Farmer in the Dell Traditional Fifty Nifty United States Five Little MonkeysGood phonics work possible with rhyming line endings. Hokey Pokey - Larry LaPrise Parts of the body. English songs for kids. Songs for children with lyrics.

BusyTeacher.org. Hello, this is another activity dealing with phonetics symbols, this time it is a song from a well-knwon band called Muse, and the song is Can't take my eyes off you. 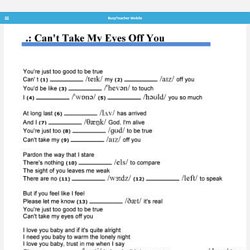 In the first exercise SS have to complete a crossword with words from the song but the clues are given in phonetics; then SS will complete the song with the missing words. Hope you like it.Chinos. Conditional songs. ESL Song Lessons - tefltunes.com - Songs For Teaching Grammar. ESL and EFL teachers looking for inspiration for lesson planning will find this list of songs to teach English grammar we’ve compiled a useful resource. Highlighted are songs available as complete ESL song lesson plans here on tefltunes.com. 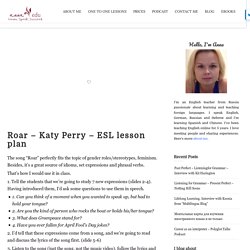 Besides, it’s a great source of idioms, set expressions and phrasal verbs. That’s how I would use it in class. 1. Tell the students that we’re going to study 7 new expressions (slides 2-4). Having introduced them, I’d ask some questions to use them in speech. 1. 2. 3. Smart people listen to Radiohead and dumb people listen to Beyoncé, according to study. How does a person’s intelligence relate to the type of music they listen to? 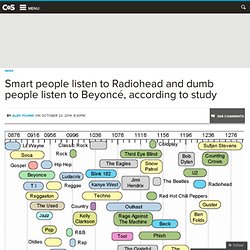 For the last several years, a software application writer by the name of Virgil Griffith has charted musical tastes based on the average SAT scores of various college institutions. For example, students attending the California Institute of Technology have an average SAT score of 1520. By looking at Facebook to determine the most popular (or — “liked”) band of students at Cal Tech, Griffith was able to conclude that Radiohead really truly is music for smart people. A highly scientific study, I know.

As Digital Inspiration points out, Griffith’s chart reveals Sufjan Stevens, Bob Dylan, The Shins, and — uh — Counting Crows as other favorite bands of smart people. Among other interesting revelations from the Griffith’s chart: Smart people prefer John Mayer over Pink Floyd; rock titans like Tool, System of a Down, and Pearl Jam fall right in the middle — so, music for average people? The Largest Vocabulary in Hip hop. BEST Music to Help Study and Work to (from Study Music Project) ESL Song Lessons - tefltunes.com - Home Page. Drew Holcomb And The Neighbors - What Would I Do Without You - Lyrics.