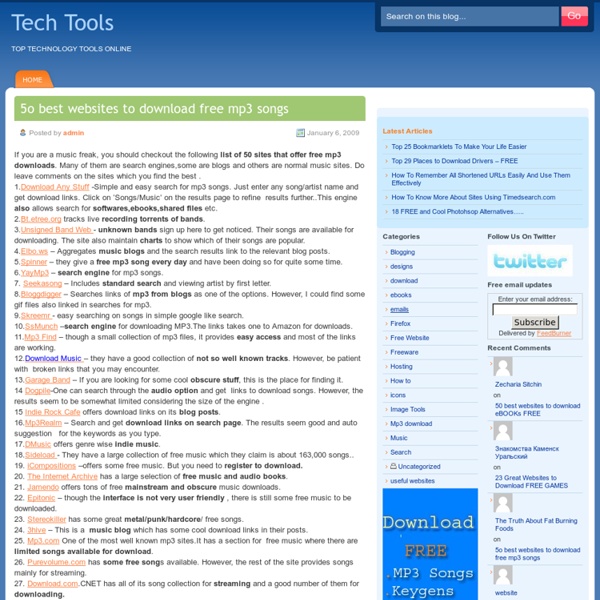 Download MP3 Music Online for Free - MP3box The Decade's 50 Most Important Recordings : All Songs Considered Blog stereomood – emotional internet radio - music for my mood and activities Roar – Katy Perry – ESL lesson plan | Anna Edu The song “Roar” perfectly fits the topic of gender roles/stereotypes, feminism. Besides, it’s a great source of idioms, set expressions and phrasal verbs. That’s how I would use it in class. 1. 1. 2. 3. 4. 5. in ESL lesson plans by Anna YOU broke up with ME. Now why the fuck won't you leave me alone, you ignorant bitch? i want songs by strong, beautiful women that will make me feel like a strong, beautiful woman, and not just the girl that got dumped. again. Requested by angela · Compiled by elle This may be a well chewed chestnut by now, but in my opinion Eleanor Roosevelt was one strong, beautiful woman who got it right: “Remember, no one can make you feel inferior without your consent.” She also served hot dogs at the White House! 01. A dark wave mix for a black heart Requested by june rose · Compiled by Annabelle Lee Sometimes the divisions between the goth sub-genres are really confusing. 01. Songs to listen to while taking your first drive Requested by Trying not to Wreck · Compiled by BetterSummer It’s too easy to get distracted when you’re driving. 01. Piano ballads for unrequited lovers Requested by Synthetic Colors · Compiled by Leicester Myth 01. songs for people with low moral standards Requested by Dee · Compiled by moral standards are so 2009 01. Songs to menstruate to 01. 01. 01.

Obscure Sound 10 Ways To Use Songs In The EFL Classroom | Lyrical English Gap Fill The most obvious one but not without its merits. Most people simply delete random words and then let the students fill them in. This can help students practice listening in a fun way, but there are other ways of doing it. Focus on a particular word form, adjectives or past simple verbs, for example. You can then get students to collaborate and speculate what they think these words will be before listening and then listen to check. Students will think about the language a lot more and use language not contained in the song. Word Substitution After listening give students a particular word form. It can also completely change the meaning of the song and you may get many different versions that the whole class can look at. Meaning From Context Find a song that has a lot of new vocabulary you want to teach your students. Tense Review Find a song with tenses you would like to review. Let the students listen to the song and then hand out the lyrics. For an example click here Dictagloss

Nickandroff’s Journal – The 10 Greatest Punk Albums Per Year, 1975-2009 – Last.fm TEACHING WITH SONGS Teaching with Songs is organised into two categories according to whether they have been chosen to present ,or further revise ,a point of Grammar or Vocabulary or because , at that time ,my students or myself fancied the song. They have also been awarded “hearts” according to the difficulty of the song or the proposed activity, being Five Hearts the maximun difficulty. Bear in mind that most videos have been embedded form Youtube so they might be no longer available.(though , I bet it won’t be difficult to find them again) ALEJANDRO– Lady Gaga ♥♥ HELLO, GOODBYE – The Beatles ♥IMAGINE – John Lennon♥♥RUSSIAN ROULETTE- Rihanna♥♥, PDFGRACE KELLY– Mika ♥♥♥♥SOULMATE – Natasha Bedingfield ♥♥♥♥REHAB- Amy Winehouse♥♥♥♥I WILL ALWAYS LOVE YOU- Whitney Houston ♥CHASING PAVEMENTS – Adele♥♥♥

7 Alternatives to Pandora and Last.FM | Mystery Tricycle Whether you are annoyed by the ads on Pandora, the limited number of skips, or the abyss of cruel 30-second song teasers from Last.FM, many online listeners are growing weary of mainstream methods of hearing new music. While the Pandora algorithm is strong, and the Last.FM related artists tool is pretty useful, don’t fool yourself in to thinking that there aren’t other great ways to expose yourself to new music in the depths of cyberspace. Here are 7 alternatives to Pandora and Last.FM that will infuse your day with an uninterrupted stream of music that large record companies haven’t managed to squash under their thumbs yet. StumbleAudio StumbleAudio has a killer recommendation engine that works better for me than Pandora’s. Songza Songza uses a recommendation engine that runs for each ‘channel’, but unlike Pandora, channels are not tied to specific listeners and rather are community property. Musicovery Stereomood Ah, the power of the ‘tag cloud’. 8tracks Grooveshark The Hype Machine

Alt Press | Feature | Not Fade Away: 13 Bands Who Became Legends In Four Years Or Less All Features It doesn't take tons of albums and countless years together to make you an influential act. In fact, more often than not, the most influential acts in our sceneâ€™s recent past tended to break up and/or burn out after a brief amount of time together. In that vein, we decided to compile a list of highly influential bands who were only together (or together with their original lineup) for four years or less. While the Germs might not appear to have much in common with Gorilla Biscuits on paper, the fact that each band's brief output is nearly flawless has undoubtedly contributed to both act's legacy. Read on and you'll see exactly what we mean. SEX PISTOLS (1975-1978) When asked about the most influential punk acts of all-time, most people will respond by mentioning the Sex Pistols or the Ramones. MINOR THREAT (1980-1983) There's no denying that Minor Threat's music was hugely inventive and influential, however that's only part of the band's enduring legacy.