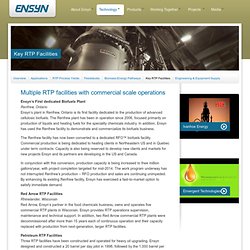 The Renfrew plant has been in operation since 2006, focused primarily on production of liquids and heating fuels for the speciality chemicals industry. In addition, Ensyn has used the Renfrew facility to demonstrate and commercialize its biofuels business. The Renfrew facility has now been converted to a dedicated RFO™ biofuels facility. Commercial production is being dedicated to heating clients in Northeastern US and in Quebec under term contracts. In conjunction with this conversion, production capacity is being increased to thee million gallons/year, with project completion targeted for mid-2014. Petroleum RTP Facilities Three RTP facilities have been constructed and operated for heavy oil upgrading.

Giant Marble Harvests Energy from Sun and Moon. It looks like a giant, glass marble. 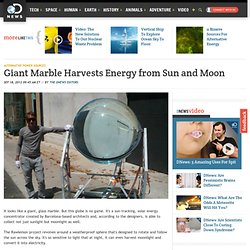 But this globe is no game. It's a sun-tracking, solar energy concentrator created by Barcelona-based architects and, according to the designers, is able to collect not just sunlight but moonlight as well. The Rawlemon project revolves around a weatherproof sphere that's designed to rotate and follow the sun across the sky.

It's so sensitive to light that at night, it can even harvest moonlight and convert it into electricity. Andre Broessel, the architect and designer, says his spherical, sun-tracking glass globe is able to concentrate sunlight and moonlight up to 10,000 times and that the system is 35 percent more efficient than photovoltaic designs that track the sun. PK Clean: Pioneering a Better Way to Recycle. You may feel good when you put your empty soda bottle in the recycling bin, but traditional recycling is a highly inefficient process. 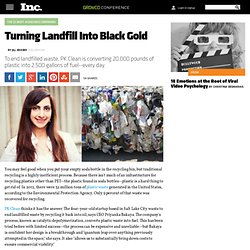 Because there isn't much of an infrastructure for recycling plastics other than PET--the plastic found in soda bottles--plastic is a hard thing to get rid of. In 2012, there were 32 million tons of plastic waste generated in the United States, according to the Environmental Protection Agency. Only 9 percent of that waste was recovered for recycling. PK Clean thinks it has the answer. Waste-to-energy technology is cleaner and safer than generally believed.

When we think of climate-change deniers, Tea Partiers and Republicans often come to mind. 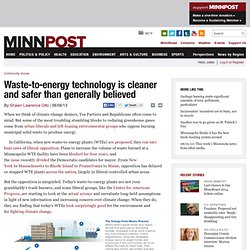 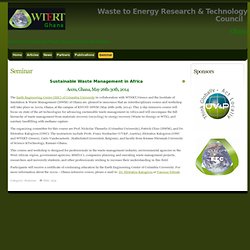 British Airways announces green fuel plant in Essex. A delayed project to supply British Airways with jet fuel from converted waste is a step closer after it was announced a location has been found for the GreenSky fuel plant, in Thurrock, Essex. 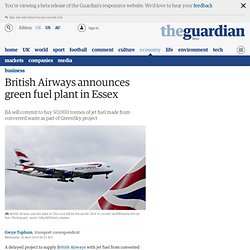 The GreenSky project will see BA commit to buy all 50,000 tonnes of jet fuel produced at the processing facility for at least 11 years. The plant, operated by Solena Fuels, is to be built by 2017 on the site of the former Coryton oil refinery, creating 150 permanent jobs. BA said the facility would be the world's first to convert landfill waste into jet fuel. Willie Walsh, chief executive of British Airways' parent company IAG, said: "We are always striving to reduce our impact on climate change and this first-of-its-kind project marks a significant step for the aviation industry. The sustainable jet fuel produced each year will be enough to power our flights from London City Airport twice over with carbon savings the equivalent of taking 150,000 cars off the road. " Waste to energy publication toolkit. SA - Energy Efficiency. “Plastic has more calorific value than coal or wood, and yet it is an irony that as a nation we burn coal every day to generate power and bury our waste plastic – which is a huge waste of energy.”Energy From Waste (EfW) Our modern lifestyles generate an ever-increasing supply of waste, and this refuse is now being recognized as one of the greatest threats to our environment and to all life on earth. 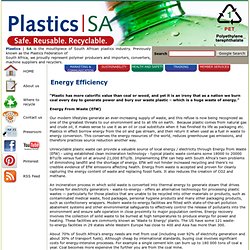 Because plastic comes from natural gas and crude oil, it makes sense to use it as an oil or coal substitute when it has finished its life as packaging etc. Plastics in effect borrow energy from the oil and gas stream, and then return it when used as a fuel in waste to energy conversion. This conserves the energy resources of the world, reduces greenhouse gas emissions, and therefore practices source reduction another way. Waste-to-Energy Considered for Urban Area of South Africa. By Natalie Kohler, Durban, South Africa E-mail Can waste be a sustainable energy resource in Gauteng Province in South Africa, which contains the sprawling city of Johannesburg and the capital Pretoria? 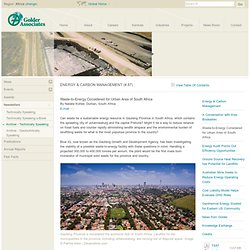 Might it be a way to reduce reliance on fossil fuels and counter rapidly diminishing landfill airspace and the environmental burden of landfilling waste for what is the most populous province in the country? Blue IQ, now known as the Gauteng Growth and Development Agency, has been investigating the viability of a possible waste-to-energy facility with these questions in mind. Handling a projected 300,000 to 400,000 tonnes per annum, the plant would be the first mass burn incinerator of municipal solid waste for the province and country. 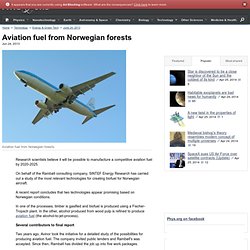 On behalf of the Rambøll consulting company, SINTEF Energy Research has carried out a study of the most relevant technologies for creating biofuel for Norwegian aircraft. A recent report concludes that two technologies appear promising based on Norwegian conditions. New gasification method turns forest residues to biofuel with less than a euro per litre. According to the new research results of the VTT Technical Research Centre of Finland, lignocellulosic biomass can be used in the production of high-quality biofuels for the price of less than one euro per litre. 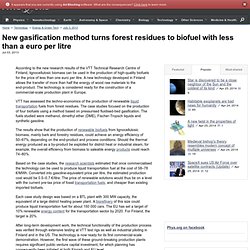 Mia Bergstrom – first woman investor in Coega. INVESTSA » » Private Equity could bridge financing gap for renewable energy. April 26, 2013 The bulk of funds needed to finance renewable energy in South Africa will need to come from the private sector, drawn in through various mechanisms and incentives put in place by government. Private equity, in particular, could help fill the vast funding gap in the renewable energy industry in South Africa – and in Africa. "Within the private financing arena, private equity and venture capital will play a pivotal role in responding to the various investment opportunities across emerging and maturing markets. This is true in South Africa and on the rest of the African continent," says Erika van der Merwe, CEO of SAVCA, the industry body for private equity and venture capital in South Africa.

"Through making available this much-needed funding, the private equity industry will help drive the move towards a lower-carbon environment and contribute to environmental sustainability. " Renewable energy is most typically attractive in a policy-driven market. Fulcrum BioEnergy Wins $4.7M DoD Contract to Build Plant that Turns Waste into Aircraft Fuel. Fulcrum BioEnergy has received $4.7 million from the U.S. Defense Department to fund the construction of a plant intended to produce affordable and renewable fuel for military aircraft out of waste, according to a Waste Management World article.

Ben Messenger writes the facility will be built at an unspecified location with access to municipal solid waste supply as the company aims to help lessen pressure at landfill sites. “Fuel diversity adds an integral component to our innovative business plan, creating a platform to offer customers the product they want, in the market they want,”said James Macias, Fulcrum’s president and CEO. “Our process is now capable of producing jet fuel, diesel and ethanol from residential garbage that would otherwise be landfilled,” he added. Waste is the New Renewable Energy. Waste is the New Renewable Energy.