Untitled. Aditi Gupta: A taboo-free way to talk about periods. The crusade for menstrual equity. If it bleeds, it leads. 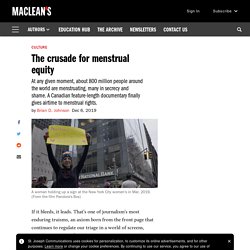 That’s one of journalism’s most enduring truisms, an axiom born from the front page that continues to regulate our triage in a world of screens, whether we’re transfixed by the horror of a terrorist bombing or make-believe carnage in Game of Thrones. “There will be blood” is the media’s eternal promise, and taunt, challenging us not to look away. But there has always been one glaring exception, hidden in plain sight: blood’s ultimate taboo. At any given moment, about 800-million people around the world are menstruating, many in secrecy and shame. About half of them had no knowledge of periods before their first cycle and still lack the resources to manage it. Before going any further, a disclaimer seems in order.

MORE: The face of women in the age of Donald Trump Though Western secular culture shows more tolerance, the stigma of menstruation still runs deep. MORE: ‘How we treat women’ The issue also intersects with environmental politics. Pads, tampons may soon be available to all B.C. students without charge. VANCOUVER (NEWS 1130) – Students across B.C. may soon not have to pay for feminine hygiene products. 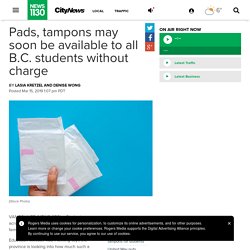 Education Minister Rob Fleming says the province is looking into how much such a program would cost. This comes after New Westminster’s school board decided to become the first city in B.C. — and all of Canada — to offer tampons and pads free of charge in bathrooms at all public schools. Vancouver professor pushes for free tampon and pad dispensers in schools. When Dr. 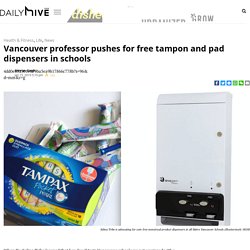 Selina Tribe learned that her daughter’s Vancouver school was not equipped with a coin-free tampon and pad dispensers for female students, she felt something had to be done. “I was taken aback by that and indeed went and talked to the school. And that, in fact, is the policy of the school boards is in general — to not have any of those [machines] installed at all,” Tribe, who is a professor at Douglas College, told Daily Hive in an interview. 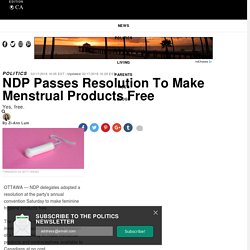 The resolution urged the party to immediately recommended the creation of a health subsidy to make menstrual products and contraceptives available to Canadians at no cost. "Tampon and pads should be treated just like toilet paper," said Tiffany Balducci, a party delegate from the Durham Labour Council. "They serve a similar purpose — items that tend to our everyday, normal bodily functions. " Fred Chartrand/The Canadian Press. 10 Organizations That Provide Menstrual Products For People Who Need Them & How You Can Help. How much do periods cost and how much do Canadian women spend? 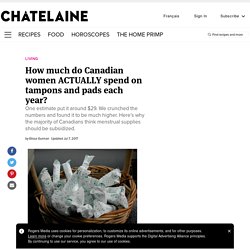 Castro / Flickr ) We surveyed 1,500 Canadians, and found that 65 percent think governments should subsidize feminine hygiene products — like tampons, pads, or menstrual cups. (Unsurprisingly, that number was even higher among women, with 72% coming out in favour of government subsidies, as opposed to 57% of men.) But how much do our periods actually cost? According to Canadianmenstruators.ca, a Canadian campaign that fought for period tax fairness, in 2014, 17,876,392 Canadian women between the ages of 12 and 49 spent an estimated $519,976,963 on menstrual hygiene products.

This post is part of The Canada Project, a representative survey of Canadians from across the country. But, as a menstruating woman, that amount sounds low. So, 20 tampons x 12 periods = 240 tampons per year. 5 pads x 12 periods = 60 pads per year. Why Feminine Hygiene Products Should Be Free in School. In mid-April, World Bank announced an extraordinary $2.5 billion investment in support of global education projects that directly benefit adolescent girls. 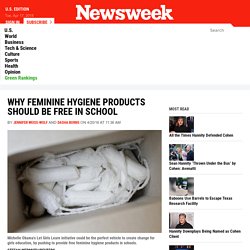 First lady Michelle Obama gave remarks at the World Bank Spring Meeting on April 13 and raised the myriad educational challenges girls face—issues she is tackling head on through her Let Girls Learn initiative. At a keynote address at the South by Southwest Music Festival in March, Obama announced the initiative’s second phase and an action plan to help the hundreds of millions of girls who struggle for the right to an education. CBC.ca. Girls in northern Saskatchewan are missing school because they don't have the money to buy menstrual supplies, according to the local MP. 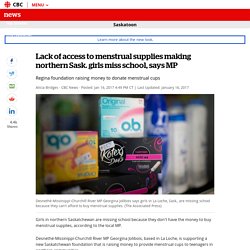 Desnethé-Missinippi-Churchill River MP Georgina Jolibois, based in La Loche, is supporting a new Saskatchewan foundation that is raising money to provide menstrual cups to teenagers in northern communities. Jolibois told CBC Radio's Morning Edition that she knew of young women who had to quietly ask for money to pay for the sanitary items. "It is very expensive, not to only buy the tampons or the pads, but also [treatment] for their cramps," she said.

"They might not have the money to buy Midol or other pain-relief medication, so they stay home. " Foundation raising money for supplies Regina dentist Sandi Beug started the Your Time Women's Empowerment Foundation to raise money to buy menstrual cups. When they heard the same problem was affecting young women in their own province, they decided to expand the project. Helping more young women.