Justice League: Comparing the Snyder Cut vs. Joss Whedon’s original. This article contains spoilers for both versions of Justice League. 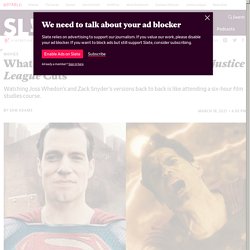 There’s never been anything like Zack Snyder’s Justice League—and not just because it’s a four-hour, $370 million superhero movie that premiered on a streaming video service. Innumerable movies have been taken away from their directors and finished by unhappy producers, and a generous handful of those directors have been invited back years later to restore a semblance of their original vision. But there’s never been a circumstance where two different directors effectively completed finished versions of the same movie, making two films that more or less share the same plot but are wildly divergent in terms of characterization, pacing, and tone.

Snyder’s Justice League and Whedon’s are so distinct—according to one report, Whedon reshot as much as three-quarters of the film—that running down all their differences would be long and unenlightening. The Matrix Reloaded is impossible to see as it was meant to be seen. The following is adapted from YouTuber Patrick Willems’ new video essay “Rewriting the Matrix Sequels.” 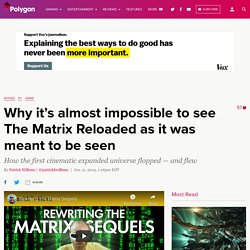 Watch the full video above. The Matrix sequels arrived at the perfect time in my life. I was 15 years old and had spent four years watching the original 1999 film more times than I could possibly count. After Searching for a Decade, Legendary Hollywood Research Library Finds a New Home - Internet Archive Blogs. Need to know what an Igloo really looks like? 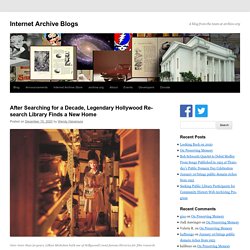 How about a Siberian hut? Or the inside of a 15th Century jail? For 50 years in Hollywood, generations of filmmakers would beat a path to the Michelson Cinema Research Library, where renowned film researcher Lillian Michelson could hunt down the answer to just about any question. She was the human card catalogue to a library of more than one million books, photos, periodicals and clippings. But ever since Lillian retired a decade ago, the Michelson Cinema Research Library has been languishing in cold storage, looking for a home. Review: Chadwick Boseman's final performance in 'Ma Rainey's Black Bottom' is legendary. In his final performance, Chadwick Boseman is the thing that legends are made of. 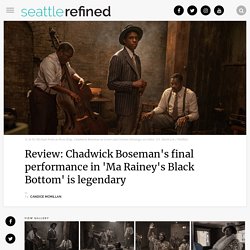 The late actor had a penchant for roles based on iconic historical figures: James Brown in "Get On Up", Thurgood Marshall in "Marshall", Jackie Robinson in "42" and even prince T'Challa in "Black Panther" if we're talking fictional universes. Untitled. The Oscars are rounding the corner toward its 100th birthday — next year’s ceremony, whatever form it takes, will be the 93rd — but the awards show is far from set in its ways. 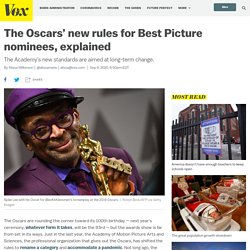 Not Available. Untitled. In a film-and-television landscape increasingly saturated with superhero content, the CW network’s Batwoman—which debuted last fall and was renewed for a second season last week—is unique for at least two reasons: the title character, who is a lesbian, is the first openly LGBTQ superhero to headline a live action comic book adaptation; and the show’s star, Ruby Rose, who identifies as lesbian and gender fluid, is the first openly LGBTQ performer to portray a headlining superhero. 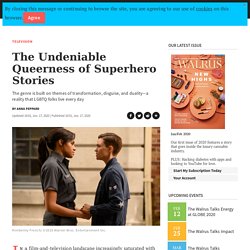 This isn’t a case of “in name only” diversity. The lesbian identity of Batwoman, civilian name Kate Kane, is woven into the show’s narrative premise. The show is adapted from a 2006 comic book reenvisioning of the character, which made her a former star recruit at West Point academy who is forced to abandon her dreams of a military career after an anonymous tip outs her as a lesbian. This compels Kate to find another way to serve, which leads to her becoming Batwoman. Stuever is not wrong. "Anna F. Gene Kelly's 'Singin' in the Rain' Is Musical Perfection.

Don brings Kathy home in a taxi, they kiss, she tells him to be careful not to get too wet, he’s a big star now … As Kathy goes in Don looks up at the rain, motions the cab to drive off, closes his umbrella, starts strolling and singing. 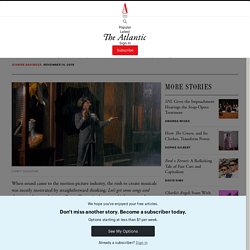 Don dances in the wet street. Then he notices a policeman eyeing him with suspicion, collects himself and strolls off. The key words in the script are: “Don dances in the wet street.” On-screen, these six words become four minutes of song and dance that define Gene Kelly and are often used to define the whole genre of original Hollywood musicals. But what did it take to put it up there? HBO’s ‘Daniel Sloss: X’ Explores the Art of Transgression. Which brings me to the rape joke in the final third of X. 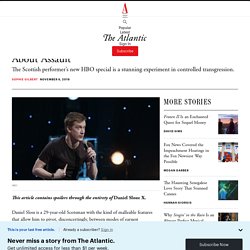 This section, as is typical in Sloss’s shows, is what you might call the “serious part.” In his words, if you buy a ticket to watch his comedy, you get 70 to 75 minutes of jokes, “and then I do a sad 15-minute TED Talk.” He does this, he explains, because “it does feel disingenuous to not talk about things that are on my mind.” The Delightful, Rebellious Rise of The Ballets Trockadero. The Trocks-as-ballerinas have gotten a lot of attention, and rightly so: They amplify “feminine” movements to parodic excess, and do great prima donna antics. 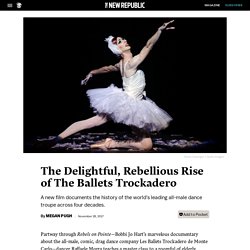