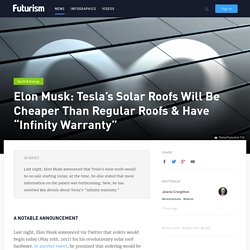 At the time, he also stated that more information on the panels was forthcoming. Now, he has unveiled key details about Tesla's "infinity warranty. " A Notable Announcement Last night, Elon Musk announced via Twitter that orders would begin today (May 10th, 2017) for his revolutionary solar roof hardware. But another announcement just came in that’s even more revolutionary: The solar roofs will have an infinity warranty. Yes, you read that right. In the above gif, you can see Tesla’s solar roof (on the left) and traditional roofs (on the right). Ultimately, this absurd warranty lends authority to Musk’s previous claims that the solar roofs would be cheaper than traditional roofs, which is notable because cost efficiency is one of the primary hurdles when it comes to renewable energy. 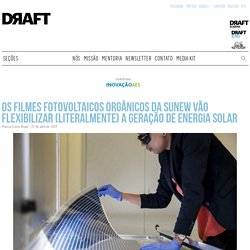 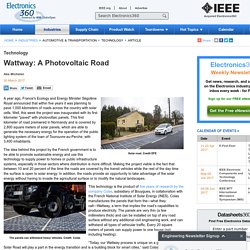 Credit EFEA year ago, France's Ecology and Energy Minister Ségolène Royal announced that within five years it was planning to pave 1,000 kilometers of roads across the country with solar cells. Well, this week the project was inaugurated with its first kilometer "paved" with photovoltaic panels. This first kilometer of road premiered in Normandy and is covered by 2,800 square meters of solar panels, which are able to generate the necessary energy for the operation of the public lighting system of the town of Tourouvre-au-Perche, with 3,400 inhabitants. 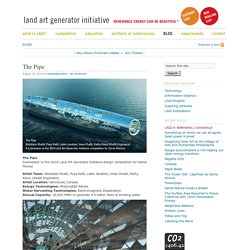 It’s a testament to our time and reminds us about our dependence on water and about our need to appreciate and value this vital gift. How to Build Your Own Solar Panels in Only Two Hours and Have Free Electricity For the Rest of Your Life! By Rich M. 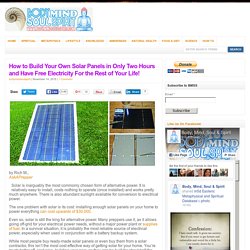 ,AskAPrepper Solar is inarguably the most commonly chosen form of alternative power. It is relatively easy to install, costs nothing to operate (once installed) and works pretty much anywhere. There is also abundant sunlight available for conversion to electrical power. Portal Solar - Tudo sobre Energia Solar Fotovoltaica. Portal Solar - Tudo sobre Energia Solar Fotovoltaica. Tesla Powerwall 2 has no competition – comparison with LG Resu and SonnenBatterie. As we reported when Tesla officially unveiled the Powerwall 2 last week, the new battery pack is a game changer in home energy storage. 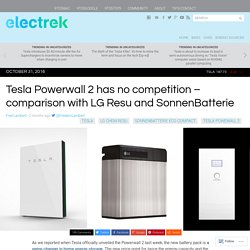 The new price point for twice the energy capacity and the integrated inverter are hard to beat specifications for the competition, which had significantly increased since Tesla introduced first generation Powerwall over a year ago. In order to get a better idea of how disruptive the new Powerwall 2 can be, we compared it with some of the other important residential home battery pack solutions. The price points of most solutions have so far made them unavailable to most markets in the US. Like Tesla’s first generation Powerwall, other companies have concentrated their efforts on markets with higher electricity rates, like Australia and Germany.

But more recently, some of the biggest players in the field felt confident enough to enter the US market, like LG with the RESU and sonnenBatterie with the Eco Compact. How Data And Machine Learning Are Changing The Solar Industry. Like most sectors, the solar industry is rapidly embracing ways to analyze and crunch data in order to lower the cost of solar energy and to open up new markets for their technology. 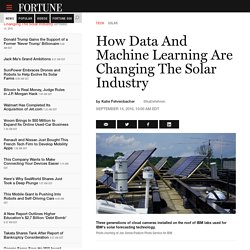 The rise of data tools—algorithms, machine learning, sensors—are driving investments in, and acquisitions of, solar startups, while entrepreneurs are launching new companies that are using data to solve various solar industry problems. Meanwhile, big companies are spending money on tracking, monitoring and evaluating data from solar projects worldwide, helping to lower the cost of generating energy from the sun. It shouldn’t come as a surprise that the solar sector is the latest to embrace the value of data. Other traditionally non-digital sectors, like the auto industry, oil and gas, and agriculture are turning to managing data as a necessity to keep their technology competitive and their companies in business. 99mpg. Alemães criam revolucionário concreto solar e agitam o setor de construção civil - TEM Sustentável. 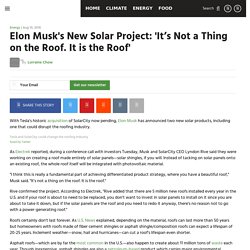 Tesla and SolarCity could change the roofing industrySolarCity Twitter. You’ll Never Believe How Cheap New Solar Power Is. Solar energy has grown 100-fold in this country in the past decade. 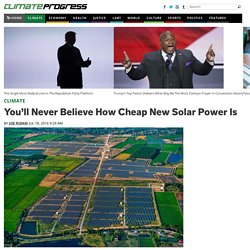 Globally, solar has doubled seven times since 2000, and Dubai received a bid recently for 800 megawatts of solar at a stunning “US 2.99 cents per kilowatt hour” — unsubsidized! For context, the average residential price for electricity in the United States is 12 cents per kilowatt-hour. Solar energy has been advancing considerably faster than anyone expected just a few years ago thanks to aggressive market-based deployment efforts around the globe. Since it’s hard to keep up with the speed-of-light changes, and this is the fuel that will power more and more of the global economy in the near future, here are all the latest charts and facts to understand it. 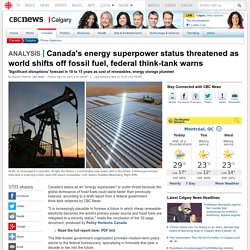 "It is increasingly plausible to foresee a future in which cheap renewable electricity becomes the world's primary power source and fossil fuels are relegated to a minority status," reads the conclusion of the 32-page document, produced by Policy Horizons Canada. Read the full report here: PDF link The little-known government organization provides medium-term policy advice to the federal bureaucracy, specializing in forecasts that peer a decade or two into the future. The document was obtained by CBC News under an access to information request and shared with two experts — one in Alberta, one in British Columbia — who study the energy industry. "It's absolutely not pie in the sky," said Michal Moore from the University of Calgary's School of Public Policy.

100% Clean Energy Economy Is Much Closer Than You Think. Imagine: Your workday is done and when you walk to the parking lot, the first thing you do is unplug your vehicle from the office building where it’s been soaking up electricity from rooftop solar panels all day. You hit the road and, as usual, there are no delays. With all the cars networked together, traffic moves seamlessly, like a flock of birds, using as little energy as possible. On the ride home, you switch to autopilot so you can check your phone to see how your house has been performing. The rooftop panels there have also been cranking all day, but a lot of their power has gone to the grid, so the home battery isn’t fully charged. No worries—the vehicle battery can top it off later. Tejas solares fotovoltaicas, el futuro de la energía solar en viviendas. With Transparent Solar Panels, Windows Could Harvest Energy Too.

One day we’ll be able to plaster more surfaces with solar harvesters, if the idea of transparent solar concentrators lives up to its potential. Researchers from Michigan State University report that they've developed transparent, luminescent concentrators that can be placed on windows, your phone screen—anything with a clear surface—without blocking the view. Richard Lunt, assistant professor of chemical engineering and materials science at MSU’s College of Engineering led a team that developed small organic molecules that absorb certain wavelengths of sunlight invisible to the human eye. “We can tune these materials to pick up just the ultraviolet and the near infrared wavelengths that then 'glow' at another wavelength in the infrared,” Lunt explained in a statement. “Because the materials do not absorb or emit light in the visible spectrum, they look exceptionally transparent to the human eye.”

Image: G L Kohuth/MSU. A máquina que transforma o deserto em vidro. 7-Day Solar, Really. Is that even possible? Home solar systems should be really fast to install right? Well this is not always the case and the US department of Energy is aiming to change this. The Northern and Central California SunShot Alliance have announced plans to construct and interconnect rooftop solar systems in one day or less, an unprecedented goal given the industry”s current average of 30 days.

In a contest sponsored by the U.S. Department of Energy SunShot Initiative, teams made up of local governments, solar and technology companies, and electric utilities will compete for a total of $10 million in cash prizes that will go back into local communities. VISIONS — CTRL+P Australia's Largest Solar Cells. Mass-produced, printable solar cells enter market and could change everything. Australian solar power experts making up the Victorian Organic Solar Cell Consortium have developed and begun to market solar cells that are created with a 3D printer. The group, consisting of scientists from the CSIRO, the University of Melbourne and Monash University have been working on the technology for over seven years and have figured out a way to cheaply print the panels onto plastic, including smart-phones and laptops, enabling self charging electronics. They are also able to print directly on to walls and windows using an opaque solar film and claim that they can line a skyscraper with panels, making it totally electrically self sufficient.

The advantage to consumers will be convenience and ease of use, as the charging process is fully automated and does not require a manual plug-in cable. Dynamic Wireless Charging (DWC), which is currently in its research phase, takes this a step further by eliminating the downtime necessary to charge a vehicle—the automobile can be charged dynamically, while in motion. V3SOLAR. Solar skirmish: V3Solar defends its technology against naysayers. Late last month, I wrote a post about an intriguing new solar technology that promised to radically reduce the delivered price of solar electricity. At the top of my post, I included that standard disclaimer, warning people not to get too excited until the product proved itself in the marketplace.

Of course, that disclaimer did not stop the inevitable: Cranky people from all over the internet descended on the comments to explain why the technology is absurd and could never possibly work. This is a familiar cycle to anyone who writes about cleantech. Robert Styler, the chief marketing officer at V3Solar, contacted me to ask if I would elevate his response to some of the criticisms so that people would be sure to see it.

Compare Best Solar Panels. Super Solar Cells. V3 Solar Cell. V3Solar's Spinning Cone-Shaped Solar Cells Generate 20 Times More Electricity Than Flat Photovoltaics. 5 breakthroughs that will make solar power cheaper than coal. There was some good news last week. While Washington was busy holding the global markets hostage and placing billions in badly needed R&D funding on the chopping block, a new report from REN21 (the Renewable Energy Network for the 21st Century) showed that global investments in renewable energy jumped 32 percent to a record $211 billion, this despite a downturn in the economy and massive R&D cuts in clean energy.

Solar FREAKIN' Roadways! (This Invention Will Change The World, Just Watch) GoSun Grill: A Breakthrough Solar Oven that Cooks at Night by Patrick Sherwin. DIY Solar Water Heater For About $30 In PVC Supplies And Paint. Shipping container with rollable PV panels inside could become an instant 100kW solar plant. UK scientists develop super-black material that absorbs 99.96 percent of surface light. Build Your own Portable Solar Generator for less than $150.