What if solar got fossil fuel subsidies? 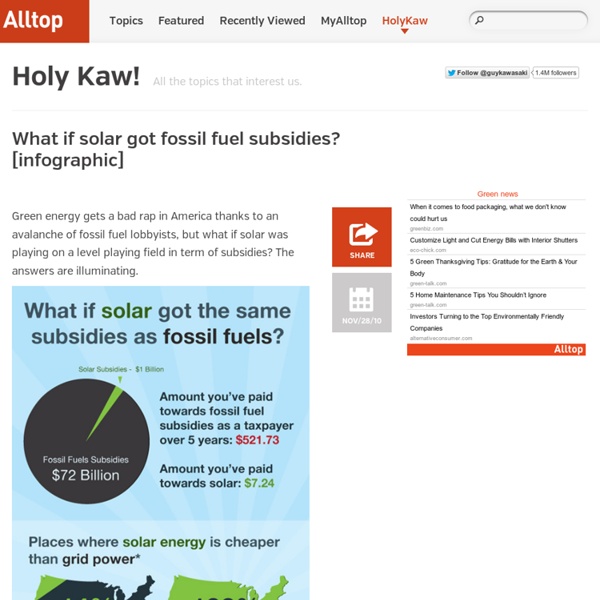 The GoSun Solar Stove really is a revolutionary way to cook. When I first wrote about the GoSun solar cooker I was really excited; it seemed such a logical move, to take the evacuated tube developed for heating water and adapting it for cooking. © GoSun The GoSun evacuated tube lets the infrared radiation in through its special coatings and because it is a vacuum bottle, doesn't let it out. The interior gets hot really fast and stays that way as long as it is in the sun. The real intuitive leap that is so important is the realization that who cares, if you can't bake a cake or do a whole roast. I should declare here that my wife, Kelly Rossiter, wrote about for TreeHugger and MNN, and we eat a lot of chinese food, most of which we get from Fuchsia Dunlop's cookbooks. Lloyd Alter/ Kelly puts meat in the tray/CC BY 2.0 The Gosun people must have liked my first post on the stove, because they sent me one to try. © Lloyd Alter/ Keep away from that stove! Setting up the stove is a breeze; just open it up and aim it at the sun. Lloyd Alter/CC BY 2.0

Cultured people happier, less stressed People who go to museums and concerts or create art or play an instrument are more satisfied with their lives, regardless of how educated or rich they are, according to a study released Tuesday. But the link between culture and feeling good about oneself is not quite the same in both sexes, according to the study, published in the British Medical Association's Journal of Epidemiology and Community Health. For men, passive activities such as taking in a concert or museum exhibition are associated with an upbeat mood and better health, it found. For women, though, the link is active, in that they were less likely to feel anxious, depressed or feel unwell if they played music or created art. Researchers led by Koenraad Cuypers of the Norwegian University of Science and Technology analysed information culled from 50,797 adults living in Norway's Nord-Trondelag County. Even more surprising was that wealth and education were not an issue.

Solar panels getting a sleek new makeover The next generation of solar panels will bear little resemblance to their predecessors, at least on the outside. Companies like SRS Energy, Kyocera and Suntech Power are working with building suppliers on alternatives to clunky solar panels that will satisfy the demands of picky property owners, creating products like solar roofing tiles that blend in with the traditional clay versions found on many Southern California homes. Aesthetics have long been a complaint of homeowners who were interested in switching to renewable power, but were unhappy with the looks of conventional solar panels. Building-integrated photovoltaics (BIPV) are solar installations that also serve as functional building materials including roofing, shading systems and window glazing. Today’s versions still stand out, but advancing technology like thin-film copper indium gallium diselenide (CIGS) could offer nearly invisible solar coverage.

How to make a 'perfect' solar absorber 30-Sep-2014 [ Print | E-mail ] Share [ Close Window ] Contact: Andrew Carleenacarleen@mit.edu 617-253-1682Massachusetts Institute of Technology@MITnews CAMBRIDGE, Mass--The key to creating a material that would be ideal for converting solar energy to heat is tuning the material's spectrum of absorption just right: It should absorb virtually all wavelengths of light that reach Earth's surface from the sun — but not much of the rest of the spectrum, since that would increase the energy that is reradiated by the material, and thus lost to the conversion process. Now researchers at MIT say they have accomplished the development of a material that comes very close to the "ideal" for solar absorption. The creation of this material is described in a paper appearing this week in the journal Advanced Materials, co-authored by MIT postdoc Jeffrey Chou, professors Marin Soljacic, Nicholas Fang, Evelyn Wang, and Sang-Gook Kim, and five others. Written by David Chandler, MIT News Office [ Print | E-mail

A Lesson on Forgiveness The Buddha was sitting under a tree talking to his disciples when a man came and spit on his face. He wiped it off, and he asked the man, “What next? What do you want to say next?” The man was a little puzzled because he himself never expected that when you spit on somebody’s face, he will ask, “What next?” He had no such experience in his past. He had insulted people and they had become angry and they had reacted. Buddha’s disciples became angry, they reacted. Buddha said, “You keep silent. “If you think on it deeply,” Buddha said, “he has spit on his own mind. The man was even more puzzled! Puzzled, confused, the man returned home. The next morning he was back there. The man looked at Buddha and said, “Forgive me for what I did yesterday.” Buddha said, “Forgive? “And you also are new.

BuildItSolar: Solar energy projects for Do It Yourselfers to save money and reduce pollution Solar power is growing so fast that older energy companies are trying to stop it If you ask the people who run America's electric utilities what keeps them up at night, a surprising number will say solar power. Specifically, rooftop solar. More Americans are installing rooftop solar and buying less electricity from their utilities That seems bizarre at first. But many utilities don't see it that way. To avoid that fate, many utilities are pushing for policies that could slow the breakneck growth of rooftop solar — by scaling back or modifying those "net metering" laws. The battle over solar is now raging in more than a dozen states — from Arizona to Utah to Wisconsin to Georgia. How cheap solar could lead to a utility "death spiral" (Lawrence Berkeley National Laboratory) Solar panels are still a niche product. If rooftop solar reached 10% of the market, utility earnings could fall by 8% to 41% So even though solar provides just 0.4 percent of America's electricity, it's growing at a shocking rate. To electric utilities, this poses a potential problem. Further reading

Kiev's Topless Protestors: 'The Entire Ukraine Is a Brothel' - SPIEGEL ONLINE - News - International The Rock is New Zealand's most beloved radio station, although not necessarily the country's most sophisticated. "Music is the ONLY thing we take seriously," is the station's fitting motto. Recently, The Rock offered its male listeners the chance to win a trip to an exotic vacation spot in eastern Ukraine. In addition to 12 paid nights, the prize includes 2,000 New Zealand dollars (€1,000) in pocket money. The grand prize, however, has to be chosen on location by the winner himself: a wife. "Win a trip to beautiful Ukraine," announces the contest title, "And Meet Eastern European Hot Lady Who Maybe One Day You Marry." The contest logo shows the pixelated face of a bleach-blonde beauty. A beefy man in his mid-30s, Greg, won the trip. The New Zealander is set to fly via Moscow to Donetsk, the regional capital of eastern Ukraine. Topless Protest against Sex Tourism and Prostitution Some travel agencies offer "Romantic Tours," in German and English, of eastern Ukraine. Women's Lib

How To Build a 400sqft Solar Powered Off Grid Cabin for $2k How to build a nice small cabin powered by solar panels. Lamar Alexander built this cute little 400 square foot cabin for approximately $2000, and powers it with a 570 watt solar and wind power system. The whole system is very inexpensive, and the best part is he is mortgage free. “…This cabin is 14×14 with a full loft and approximately 400 square feet of living space. Image: Comments comments Some black holes may be older than time › News in Science (ABC Science) News in Science Friday, 6 May 2011 Stuart GaryABC Before time An intriguing new hypothesis suggests some black holes could have formed before the formation of our universe. The work by Professor Bernard Carr from Queen Mary University in London and Professor Alan Coley from Canada's Dalhousie University, examines a cosmology in which the universe goes through cycles of birth and death. According to their work published on the pre-press website arXiv.org, some black holes could be remnants of a previous universe that collapsed in a big crunch and was then reborn in the big bang - 13.7 billion years ago. Called primordial black holes, they would be formed in the hyper dense conditions existing in the moments after the big bang. Carr and Coley say if the universe expands and contracts in cycles of big bangs and big crunches, some primordial black holes may survive. They reached their conclusion after thinking about what might happen in the moments before a big crunch. Pushing the boundaries

1BOG Home Solar Power Discounts - Buy Solar Panels for Your Home! MIT Energy Storage Discovery Could Lead to 'Unlimited' Solar Power Clean Power Published on October 25th, 2008 | by Andrew Williams Researchers at Massachusetts Institute of Technology (MIT) have discovered a new way of storing energy from sunlight that could lead to ‘unlimited’ solar power. The process, loosely based on plant photosynthesis, uses solar energy to split water into hydrogen and oxygen gases. According to project leader Prof. Nocera has also explained that the process (video) uses natural materials, is inexpensive to conduct and is easy to set up. Other prominent scientists in the field have rushed to highlight the revolutionary potential of the new process. “This is a major discovery with enormous implications for the future prosperity of humankind. No news has yet been released of a predicted timescale to commericial development or mainstream adoption. Image Credit – markus941 via flickr.com on a Creative Commons license. About the Author Andrew Williams is a writer and freelance journalist specialising in sustainability and green issues.