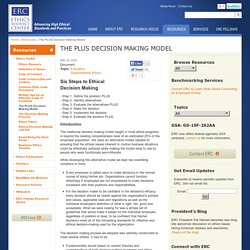 Making Ethical Decisions: Model. Mobile & Technology Recycling. Easy and environmentally friendly way to dispose of used goods and raise money In the past 3 years in the UK over £300m has been donated to Charity through recycling We recycle mobile phones, electrical gadgets, printer cartridges and more! 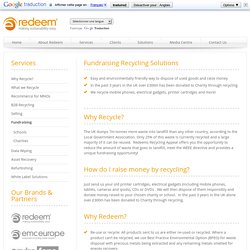 The UK dumps 7m tonnes more waste into landfill than any other country, according to the Local Government Association. Only 25% of this waste is currently recycled and a large majority of it can be reused. Redeems Recycling Appeal offers you the opportunity to reduce the amount of waste that goes to landfill, meet the WEEE directive and provides a unique fundraising opportunity! Just send us your old printer cartridges, electrical gadgets (including mobile phones, tablets, cameras and ipods), CDs or DVDs . We will then dispose of them responsibly and donate money raised to your chosen charity or school.

Environment. The UN Global Compact’s environment principles are derived from the Rio Declaration on Environment and Development. 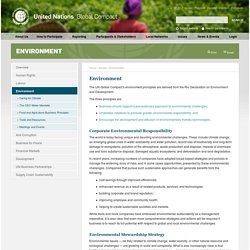 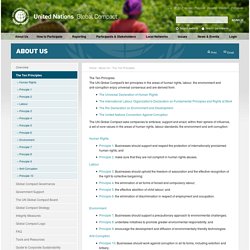 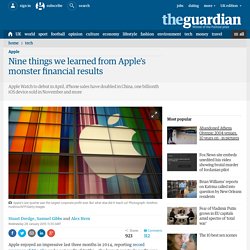 We already know about Apple’s record iPhone sales – 74.5m units – during the quarter, but the company’s earnings call with analysts after the results were announced yielded more information about its business in 2014 and its plans for 2015. Here are the key lessons. 1. Apple Watch will ship in April “Development for Apple Watch is right on schedule and we expect to begin shipping in April,” said chief executive Tim Cook during the call. First unveiled in September, Apple Watch vaguely meant to be available in “early 2015” then “spring”. But isn’t April a bit later than “early” would have led people to expect?

Cook said that developers are working on bespoke apps, notifications and information summaries that Apple calls “glances” for the Apple Watch. 2. Apple: what do you do after becoming the world’s most profitable company? When Apple became the most profitable company in history last week, analysts could hardly contain their excitement. 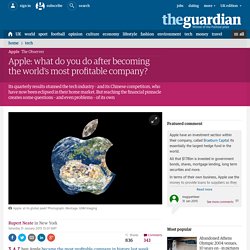 “Stunning”, “outstanding”, “a monster” were some of the analysts’ reactions to numbers showing the Silicon Valley firm had made $18bn (£12bn) in just three months – by selling 34,000 iPhones an hour around the clock from October to December. It now has $178bn cash in the bank. But after all the commotion, the questions began. Agbogbloshie: the world's largest e-waste dump – in pictures. E-waste in Agbogbloshie, Ghana. Agbogbloshie - A First Visit. Although I had seen photos and videos from Agbogbloshie in Accra, and knew that it would be far from pleasant, nothing had prepared me for the utter devastation that you’re faced with when you experience the place in person. 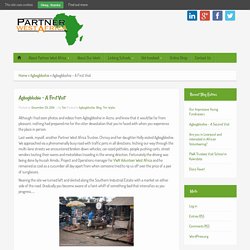 Last week, myself, another Partner West Africa Trustee, Chrissy and her daughter Holly visited Agbogbloshie. We approached via a phenomenally busy road with traffic jams in all directions. Inching our way through the multi-lane streets we encountered broken down vehicles, car-sized potholes, people pushing carts, street vendors touting their wares and motorbikes traveling in the wrong direction. Fortunately the driving was being done by Inusah Amidu, Project and Operations manager for VWA Volunteer West Africa and he remained as cool as a cucumber all day apart from when someone tried to rip us off over the price of a pair of sunglasses. Press Release: Change and Hope Comes To Agbogbloshie - Pure Earth. Change and Hope Comes To Agbogbloshie: Africa’s Largest E-waste Dump Begins Transformation to Model Recycling Center October 22, 2014–A celebration marked the opening of the new e-waste recycling facility in Agbogbloshie, Accra, Ghana. 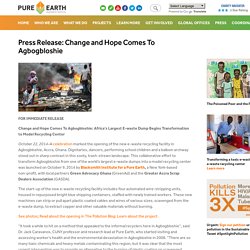 Dignitaries, dancers, performing school children and a balloon archway stood out in sharp contrast in this sooty, trash-strewn landscape. This collaborative effort to transform Agbogbloshie from one of the world’s largest e-waste dumps into a model recycling center was launched on October 9, 2014 by Blacksmith Institute for a Pure Earth, a New York-based non-profit, with local partners Green Advocacy Ghana (GreenAd) and the Greater Accra Scrap Dealers Association (GASDA). 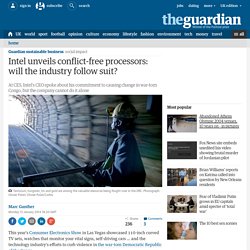 Those efforts are being led by Intel, the giant (annual revenues of $52bn) maker of microprocessors for computer, tablets and mobile phones, among other things, and its new CEO, Brian Krzanich. Near the end of a high-profile keynote address in which he demonstrated "smart earbuds", 3D printing, advances in video gaming and an embedded processor designed to enable "wearable computing", Krzanich paused and said: "Okay. I'm going to switch gears for a minute now. … This is not an issue we would normally talk about at CES, but it is an issue that is very important and personal to me. That issue is conflict minerals. " Companies' conflict mineral reports are mixed as SEC deadline passes. While some US companies are racing to the wire to file their first ever conflict minerals reports, due to the US Securities and Exchange Commission today, those filed so far range greatly in clarity and detail. 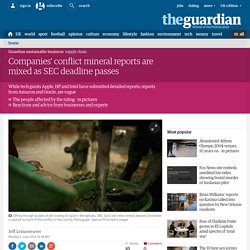 Some tech giants that have taken a lead on this issue - such as Intel, HP and Apple - filed in-depth reports last week. Meanwhile others, including Herman Miller, Soda Stream, and Oracle, can best be described as vague. The SEC’s requirement offers a first glimpse into the often-murky backdrop of a company’s global supply chain, particularly of companies in the consumer technology and electronics industries. This first ever conflict minerals report has stirred up much controversy, panic and corporate consternation, particularly surrounding the daunting task and complexity of putting together a first conflict minerals report. To date, big players in consumer technology such as Microsoft, Amazon and Walmart have yet to file. Detailed disclosures. Global Witness. (PHOTOS) Transforming Agbogbloshie: From Toxic E-Waste Dump Into Model Recycling Center. On October 9, Agbogbloshie, Ghana – one of the world’s largest e-waste dumpsites – got something new. The sense of excitement grew when residents saw a group of about a dozen men carrying a towering sign through town before planting it in the ground and raising it up in a Herculean effort, with six men on each side pushing and pulling.

The 20-foot tall sign announced the launch of a pilot project – the opening of a new e-waste recycling facility that could transform the way recyclers work in one of the worst polluted places on earth. “Everyone is talking about how this is just the beginning,” said Kira Traore, the program director for Africa at Blacksmith Institute for a Pure Earth.