What does the US import from Mexico and how much are the taxes? An interactive guide — Quartz. Watch how the measles outbreak spreads when kids get vaccinated – and when they don't. Vaccinated susceptible vaccinated but susceptible infected contact with an infected person About the graphic: Here are 10 hypothetical communities with different vaccination rates. 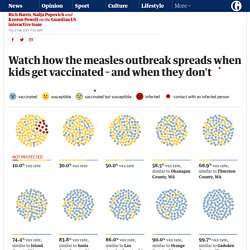 They show just how important high rates of immunization can be to protect everyone against measles. If you run the simulation enough times, only very highly vaccinated groups are able to consistently block measles infection from their community. Odyssey.js. The Rhythm of Food — by Google News Lab and Truth &amp; Beauty. Inauguration Speeches. Graphics - Bloomberg. FiveThirtyEight. 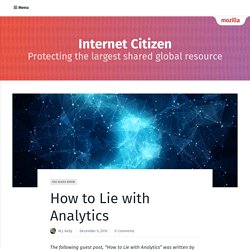 Learn more about the history of data analytics and visualization at The Glass Room through December 14, 2016. Ted will be hosting a session and guided tour on December 11 at 3 p.m. 2016 USA Elections. Why infectious bacteria are winning. London Marathon: how many run the dream race? An in depth look at statistical issues from the Financial Times. FT Data (@ftdata) Financial Times (@FinancialTimes) The Chart Doctor. By Matt Stiles. How We Rebuilt the Wall Street Journal’s Graphics Team. Combining forces, embedding specialists, and busting out of the news cycle The Wall Street Journal recently took steps to merge our print graphics department with our interactive team. 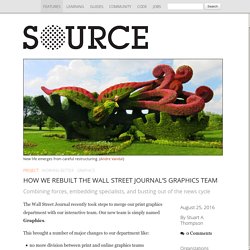 Our new team is simply named Graphics. This brought a number of major changes to our department like: no more division between print and online graphics teamsa new Enterprise Visuals team that pitches their own projects outside the daily news cycleembedded developers who sit beside section editors and reporters Many other organizations are undergoing similar changes. From Skill-First to Story-First As in many other newsrooms, our teams were organized by their end product. When breaking news happened under our old structure, our print and interactive graphics teams launched into action—but independently of each other. When news broke about the missing Malaysian Airlines plane, our graphics editors created a series of maps for the print deadline. The Journalist-Engineer – Medium. A couple months ago, I published an article comparing historic and present-day popularity of older music. 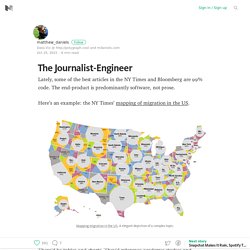 I used two huge datasets: 50,000 Billboard songs and 1,4M tracks on Spotify. If I were writing an academic paper, I’d do a ton of analysis, regression, and modeling to figure out why certain songs have become more popular over time. Or I could just make some sick visualizations… HuffPost Pollster - Polls and Charts. These charts clearly show how some Olympic swimmers may have gotten an unfair advantage.

Denmark's Pernille Blume won the gold medal in the 50-meter freestyle swimming in Lane 4 at the 2016 Summer Olympics. 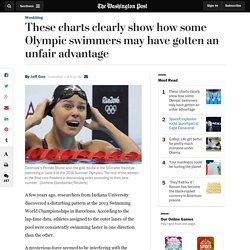 The rest of the women in the final race finished in descending order according to their lane number. (Dominic Ebenbichler/Reuters) A few years ago, researchers from Indiana University discovered a disturbing pattern at the 2013 Swimming World Championships in Barcelona. How politicians poisoned statistics. In January 2015, a few months before the British general election, a proud newspaper resigned itself to the view that little good could come from the use of statistics by politicians. 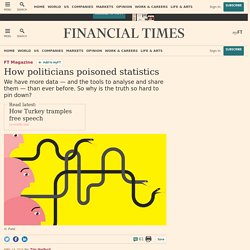 An editorial in the Guardian argued that in a campaign that would be “the most fact-blitzed in history”, numerical claims would settle no arguments and persuade no voters. Not only were numbers useless for winning power, it added, they were useless for wielding it, too. Numbers could tell us little. Nonpartisan, non-advocacy public opinion polling and demographic research. Projects from The Wall Street Journal’s Graphics Team. DataIsBeautiful. Graphics. Data Driven Journalism. Welcome. The Data Journalism Handbook. 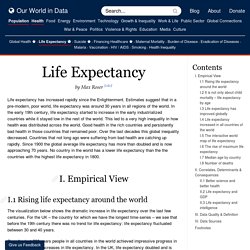 Estimates suggest that in a pre-modern, poor world, life expectancy was around 30 years in all regions of the world. In the early 19th century, life expectancy started to increase in the early industrialized countries while it stayed low in the rest of the world. This lead to a very high inequality in how health was distributed across the world. Good health in the rich countries and persistently bad health in those countries that remained poor. Over the last decades this global inequality decreased. Empirical View. The 'Black Route' to Europe, and the story of a Syrian family who braved it - Washington Post. Discovering Gale Crater: A VR experience from the L.A. Times. Best experienced over a wifi connection Loading initial data Controls: W / S: Forwards / Backwards A / D: Left / Right R / F: Up / Down Q / E: Roll left / right Up / Down: Pitch up / down Left / Right: Yaw left / right Shift: Speed up By Armand Emamdjomeh Take a virtual reality audio tour of the Gale Crater, including geological features and areas that appear to have been carved by flowing water. 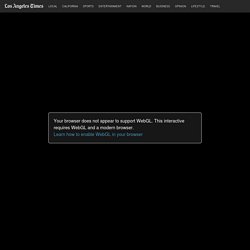 Discovering Gale Crater: How we did it. Remember when virtual reality first became a "thing? 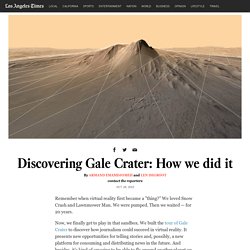 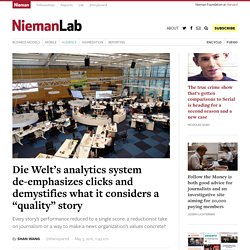 The New York Times is in the business of telling stories. And for a while now, it has been quite good at doing just that. But what it means to tell a story looks different today than it did 100 years ago. Google’s Remarkably Close Relationship With the Obama White House, in Two Charts. When President Obama announced his support last week for a Federal Communications Commission plan to open the market for cable set-top boxes — a big win for consumers, but also for Google — the cable and telecommunications giants who used to have a near-stranglehold on tech policy were furious.

AT&T chief lobbyist Jim Cicconi lashed out at what he called White House intervention on behalf of “the Google proposal.” He’s hardly the first to suggest that the Obama administration has become too close to the Silicon Valley juggernaut. Over the past seven years, Google has created a remarkable partnership with the Obama White House, providing expertise, services, advice, and personnel for vital government projects.

Precisely how much influence this buys Google isn’t always clear. But consider that over in the European Union, Google is now facing two major antitrust charges for abusing its dominance in mobile operating systems and search. One Report, Diverging Perspectives - Interactive Graphic. The dark side of Guardian comments. Comments allow readers to respond to an article instantly, asking questions, pointing out errors, giving new leads. At their best, comment threads are thoughtful, enlightening, funny: online communities where readers interact with journalists and others in ways that enrich the Guardian’s journalism.

But at their worst, they are something else entirely. Data. The Panama Papers · ICIJ. Unfiltered.news. An in depth look at statistical issues from the Financial Times. Interactive. VALID – Visual Analytics in Data-driven Journalism. Nieman Journalism Lab » Pushing to the Future of Journalism. Open data journalism. Data is everywhere: from governments publishing billions of bytes of the stuff, to visual artists creating new concepts of the world through to companies building businesses on the back of it. Storybench - Code.