The three-degree world: cities that will be drowned by global warming 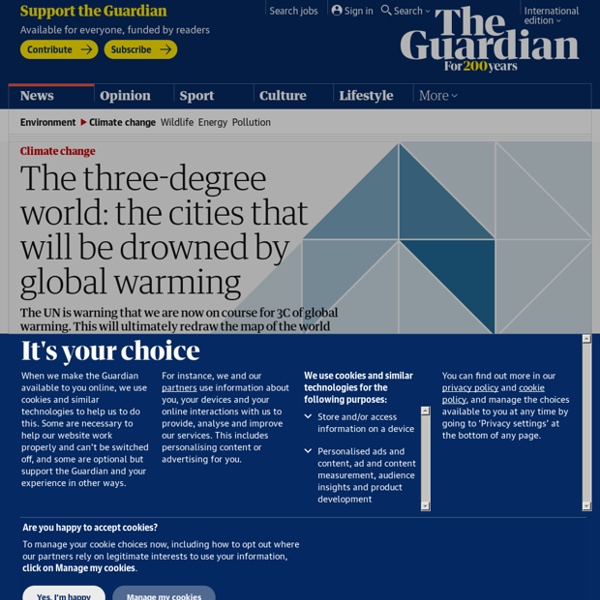 When UN climate negotiators meet for summit talks this month, there will be a new figure on the table: 3C. Until now, global efforts such as the Paris climate agreement have tried to limit global warming to 2C above pre-industrial levels. However, with latest projections pointing to an increase of 3.2C by 2100, these goals seem to be slipping out of reach. Global temperature change compared to pre-industrial levels “[We] still find ourselves in a situation where we are not doing nearly enough to save hundreds of millions of people from a miserable future,” said Erik Solheim, the UN environment chief, ahead of the upcoming Bonn conference. One of the biggest resulting threats to cities around the world is sea-level rise, caused by the expansion of water at higher temperatures and melting ice sheets on the north and south poles. Asian cities will be worst affected The regional impact of these changes is highly uneven, with four out of five people affected living in Asia. Osaka, Japan “My God.

The most effective individual steps to tackle climate change aren't being discussed Governments and schools are not communicating the most effective ways for individuals to reduce their carbon footprints, according to new research. Published today in the journal Environmental Research Letters, the study from Lund University, found that the incremental changes advocated by governments may represent a missed opportunity to reduce greenhouse gas emissions beneath the levels needed to prevent 2°C of climate warming. The four actions that most substantially decrease an individual's carbon footprint are: eating a plant-based diet, avoiding air travel, living car-free, and having smaller families. The research analysed 39 peer reviewed papers, carbon calculators, and government reports to calculate the potential of a range of individual lifestyle choices to reduce greenhouse gas emissions.

World set to use more energy for cooling than heating The world faces a looming and potentially calamitous “cold crunch”, with demand for air conditioning and refrigeration growing so fast that it threatens to smash pledges and targets for global warming. Worldwide power consumption for air conditioning alone is forecast to surge 33-fold by 2100 as developing world incomes rise and urbanisation advances. Already, the US uses as much electricity to keep buildings cool as the whole of Africa uses on everything; China and India are fast catching up. By mid-century people will use more energy for cooling than heating. Antarctic sea ice levels hit record low, but experts are not sure why Sea ice levels in Antarctica dropped to a record low this year, but experts say there is not a clear link to climate change. More than 60 meteorologists and scientists from around the world are holding a week-long meeting in Hobart, Tasmania, to better understand sea ice changes on the frozen continent. Dr Jan Lieser from the Antarctic Climate and Ecosystems Cooperative Research Centre said sea ice levels had experienced a “massive increase” in variability over the past few years. Sea ice coverage fell to 2.075m sq km in March, the lowest since satellite observations began in 1979.

Scientists find that a vital part of Earth's ozone layer is not healing as expected This false-color image shows ozone concentrations above Antarctica on Oct. 2, 2015. (NASA/Goddard Space Flight Center) The rescue of the planet’s protective ozone layer has been hailed as one of the great success stories of modern environmental regulation — but on Monday, an international team of 22 scientists raised doubts about whether ozone is recovering as expected across much of the world.

The social causes of ‘natural’ disasters Sep 15, 2017 Storms do not discriminate, but they make landfall on societies that do, argues Daniel Macmillen Voskoboynik The last months have seen remarkable episodes of environmental upheaval. Almost every day has brought news of monsoons and mega-storms, droughts and wildfires, record temperatures and damning reports of ecological fragility. Huge storms – Hato, Harvey and Irma – have barrelled through the Caribbean and East Asia.

Climate Change Is Messing With Your Dinner A fisherman cleans his catch offshore from Newlyn, U.K. Credit: Annie Sakkab/Bloomberg The world’s dinner tables are seeing the impact of climate change. As cold regions become warmer, and warm places hotter still, farming and fishing are shifting. An evolving climate means big changes for people who grow, catch and rear for a living, and everyone else who buys and eats what they produce. Mapped: How climate change affects extreme weather around the world ATTRIBUTION | April 15. 2020. 16:30 Mapped: How climate change affects extreme weather around the world In the early 2000s, a new field of climate-science research emerged that began to explore the human fingerprint on extreme weather, such as floods, heatwaves, droughts and storms. Known as “extreme event attribution”, the field has gained momentum, not only in the science world, but also in the media and public imagination. These studies have the power to link the seemingly abstract concept of climate change with personal and tangible experiences of the weather. Scientists have published more than 300 peer-reviewed studies looking at weather extremes around the world, from wildfires in Alaska (pdf) and hurricanes in the Caribbean to flooding in France and heatwaves in China.

theconversation The carbon footprint of tourism is about four times larger than previously thought, according to a world-first study published today in Nature Climate Change. Researchers from the University of Sydney, University of Queensland and National Cheng Kung University – including ourselves – worked together to assess the entire supply chain of tourism. This includes transportation, accommodation, food and beverages, souvenirs, clothing, cosmetics and other goods. Put together, global tourism produces about 8% of global greenhouse gas emissions, much more than previous estimates. Short Answers to Hard Questions About Climate Change - The New York Times 3. Is there anything I can do about climate change? Fly less, drive less, waste less. You can reduce your own carbon footprint in lots of simple ways, and most of them will save you money. You can plug leaks in your home insulation to save power, install a smart thermostat, switch to more efficient light bulbs, turn off the lights in any room where you are not using them, drive fewer miles by consolidating trips or taking public transit, waste less food and eat less meat.

Hurricane Irma: Damage mapped Media playback is unsupported on your device The most powerful Atlantic storm in a decade has left a trail of destruction in the Caribbean, affecting an estimated 1.2 million people. Irma, now downgraded to a tropical storm, reached the highest, category five status, and packed winds of up to 295km/h (185mph). Hurricane Harvey: The link to climate change Image copyright Getty Images When it comes to the causes of Hurricane Harvey, climate change is not a smoking gun. However, there are a few spent cartridge cases marked global warming in the immediate vicinity. Hurricanes are complex, naturally occurring beasts - extremely difficult to predict, with or without the backdrop of rising global temperatures.