Social media plays a really big and significant role in spreading information and news. Because news can spread in the blink of an eye throughout social media, it’s really easy for people to familiarize themselves with a topic. Child labor, unfortunately, does still happen around the world.

But thanks to social media it is really easy to bring down industries, brands, and anyone who takes advantage of kids. Brands also do make a lot of money from minors and the law hasn’t fully kept up with it. Although it is of big interest recently in the news how youtube and Instagram disrupted child labor as millions of kids make money exposing themselves online in front of often millions of people. Online and Making Thousands, at Age 4: Meet the Kidfluencers. Samia was an influencer before she could talk.

Waleed, I'm so glad you shared this article. I think it's the most important piece of your entire collection because it doesn't cover the past child labor, that nothing can be done to rectify. Instead, it points to the next generation of child labor. The idea that infants and tiny toddlers are becoming tastemakers and being used by their parents disgusts me! – mrslw

Her parents, Adam and LaToya Ali, are influencers themselves and began chronicling Samia’s impending arrival on YouTube and Instagram in 2014, once Ms. Ali learned she was pregnant. “Samia’s birth video is on YouTube, so she’s pretty much been born into social media,” Mr. Ali said. Samia is now 4 and has 143,000 followers on Instagram and 203,000 subscribers on YouTube. There are instances when “Samia can’t verbatim get the message out,” Mr. Welcome to the world of kidfluencers. Now, advertisers like Walmart, Staples and Mattel are bankrolling lucrative endorsements deals for toddlers and tweens with large followings and their own verified profiles on YouTube and Instagram. Instagram, owned by Facebook, and YouTube, which is part of Google, are designed for adults in large part because of a federal privacy law that protects children under 13. That can mean big money for the families of kidfluencers. “My kids complete the package, man,” Mr. 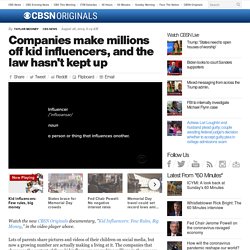 Lots of parents share pictures and videos of their children on social media, but now a growing number are actually making a living at it. The companies that showcase the content of these kid influencers are making millions in the process, while the rules and regulations aimed at protecting children haven't kept up. Jaqi Clements, mother of 9-year-old social media influencers Ava and Leah, was recently notified that the footwear brand Crocs is looking to collaborate with the twins. "Do you guys know what Crocs are? " she asked the girls, to which Ava replied, "No. " Eventually Ava remembered the iconic foam clogs. These collaborations are also lucrative for the brands that participate. 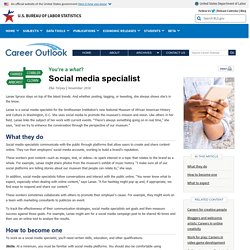 And whether posting, tagging, or tweeting, she always shows she’s in the know. Lanae is a social media specialist for the Smithsonian Institution’s new National Museum of African American History and Culture in Washington, D.C. She uses social media to promote the museum’s mission and vision. Like others in her field, Lanae links the subject of her work with current events. Campaigns: World Day Against Child Labour, 2016. This year's World Day Against Child Labour , June 12, focuses on child labour in supply chains. 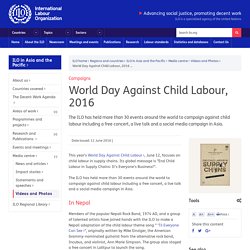 Its global message is "End Child Labour in Supply Chains: It’s Everyone's Business!”. The ILO has held more than 30 events around the world to campaign against child labour including a free concert, a live talk and a social media campaign in Asia. In Nepal Members of the popular Nepali Rock Band, 1974 AD, and a group of talented artists have joined hands with the ILO to make a Nepali adaptation of the child labour theme song " ‘Til Everyone Can See ", originally written by Mike Einziger, the American Grammy-nominated guitarist from the alternative rock band, Incubus, and violinist, Ann Marie Simpson. The group also staged a free concert in Lalitpur to launch the song. ‘Til Everyone Can See - the Nepali Version In Thailand In Viet Nam In Indonesia.