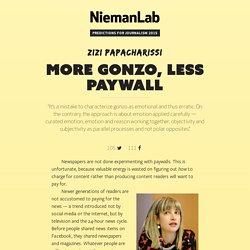 This is unfortunate, because valuable energy is wasted on figuring out how to charge for content rather than producing content readers will want to pay for. Newer generations of readers are not accustomed to paying for the news — a trend introduced not by social media or the Internet, but by television and the 24-hour news cycle. Before people shared news items on Facebook, they shared newspapers and magazines. 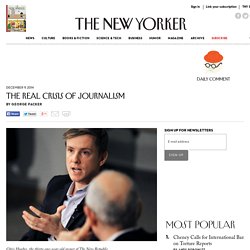 What's New & Worth Knowing on Facebook with Vadim Lavrusik 05/01 by ColumbiaJournalism. “Syrian Society Is Beginning to Fall Apart” Neighbors are turning on their neighbors, according to refugees who have escaped Syria’s bloody conflict for eastern Lebanon. 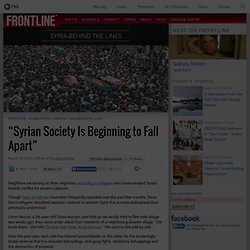 Though fears of civil war have been frequently reported over the past few months, these Sunni refugees described sectarian violence in western Syria that is more widespread than previously understood. Umm Nasser, a 34-year-old Sunni woman, said that as her family tried to flee their village two weeks ago, they came under attack from residents of a neighboring Alawite village. Theater, Disguised Up as Real Journalism. Overview. By Amy Mitchell and Tom Rosenstiel of PEJ In 2011, the digital revolution entered a new era. 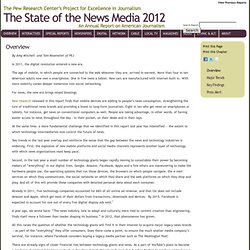 The age of mobile, in which people are connected to the web wherever they are, arrived in earnest. More than four in ten American adults now own a smartphone. One in five owns a tablet. New cars are manufactured with internet built in. For news, the new era brings mixed blessings. New research released in this report finds that mobile devices are adding to people’s news consumption, strengthening the lure of traditional news brands and providing a boost to long-form journalism. Guardian open journalism: Three Little Pigs advert - video. A High-Tech War on Leaks. The New York Times - Breaking News, World News & Multimedia. Newspaper job cuts surged 30% in 2011. The number of jobs eliminated in the newspaper industry rose by nearly 30% in 2011 from the prior year, according to the blog that has been tracking the human toll on the industry for the last five years. 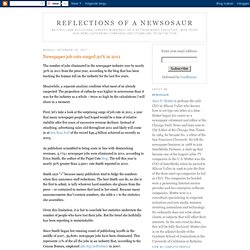 Meanwhile, a separate analysis confirms what most of us already suspected: The proportion of cutbacks was higher in newsrooms than it was for the industry as a whole – twice as high by the calculations I will share in a moment. First, let’s take a look at the surprising surge of job cuts in 2011, a year that many newspaper people had hoped would be a time of relative stability after five years of successive revenue declines. Instead of steadying, advertising sales slid throughout 2011 and likely will come in at less than half of the record $49.4 billion achieved as recently as 2005. As publishers scrambled to bring costs in line with diminishing revenues, 3,775+ newspaper jobs were eliminated in 2011, according to Erica Smith, the author of the Paper Cuts blog. Five New Year’s Resolutions For Newsrooms. Ah, the new year. A time for promising to do new things and reflecting on what you failed to achieve in the past year.

For the ever-evolving news industry, it’s a fresh opportunity to assess what’s working and what’s not, and a reason to get others around you to try something new (not always the easiest thing to accomplish in the newsroom). These are five resolutions, ranging from relatively simple to somewhat radical, that you can use as a source of inspiration for your own newsroom. 1. Cut back on paper usage. Jill Abramson, New York Times’ First Woman Executive Editor. At nine o’clock on the morning of September 6th, Jill Abramson was riding the subway uptown from her Tribeca loft. 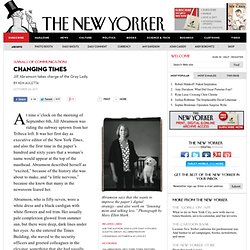 It was her first day as executive editor of the New York Times, and also the first time in the paper’s hundred and sixty years that a woman’s name would appear at the top of the masthead. Abramson described herself as “excited,” because of the history she was about to make, and “a little nervous,” because she knew that many in the newsroom feared her. Abramson, who is fifty-seven, wore a white dress and a black cardigan with white flowers and red trim. Her usually pale complexion glowed from summer sun, but there were deep, dark lines under her eyes. Eight Simple Rules for Doing Accurate Journalism. It’s a cliché to say clichés exist for a reason. 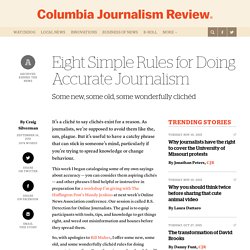 As journalists, we’re supposed to avoid them like the, um, plague. But it’s useful to have a catchy phrase that can stick in someone’s mind, particularly if you’re trying to spread knowledge or change behaviour. This week I began cataloguing some of my own sayings about accuracy — you can consider them aspiring clichés — and other phrases I find helpful or instructive in preparation for a workshop I’m giving with The Huffington Post’s Mandy Jenkins at next week’s Online News Association conference. Our session is called B.S. Detection for Online Journalists. The Information Needs of Communities: The Changing Media Landscape in a Broadband Age, a report by the FCC. Journalism blooms in Egypt’s Arab Spring. An Egyptian woman reads the newspaper after spending the night in Tahrir Square in downtown Cairo, on Feb. 12, 2011. 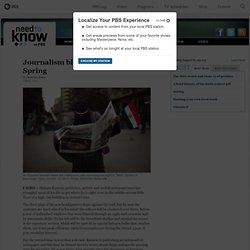 Photo: AP/Emilio Morenatti CAIRO – Hisham Kassem, publisher, activist and mulish newspaperman has struggled most of his life to get where he is right now: in the rubble-strewn fifth floor of a high-rise building in central Cairo. The floor plan of his new headquarters leans against the wall, but by now the contours are hard-wired in his mind: the editors will be clustered over there, below a row of unfinished windows that were blasted through an eight-inch concrete wall by pneumatic drills. To his left will be the broadcast studios and around the corner is the reporters’ section, which will be spot-lit by special halogen bulbs that, studies show, can tease peak efficiency rates from employees during the crucial 3 p.m.-6 p.m. workday interval.

The Necessity of Data Journalism in the New Digital Community. This is the second post in a series from Nicholas White, the co-founder and CEO of The Daily Dot. 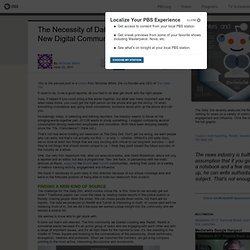 It used to be, to be a good reporter, all you had to do was get drunk with the right people. Sure, it helped if you could string a few words together, but what was really important was that when news broke, you could get the right person on the phone and get the skinny. Or when something scandalous was going down somewhere, someone would pick up the phone and call you.

Why Every Student Should Learn Journalism Skills. How do we make schools more relevant to students? 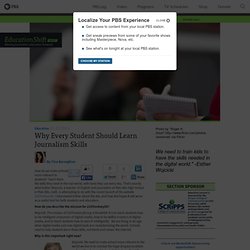 Teach them the skills they need in the real world, with tools they use every day. That’s exactly what Esther Wojcicki, a teacher of English and journalism at Palo Alto High School in Palo Alto, Calif., is attempting to do with the recent launch of the website 21STcenturylit. Journalism in a bag.» Blog Archive » My public radio debut. Your handiest reporting tool may be the smartphone in your pocket. Every journalist has found herself in some version of this situation: Bianca Vazquez Toness, a reporter for Boston’s WBUR public radio, drove about 40 minutes north of her office Tuesday to interview the controversial mayor of Lawrence, Mass.

Only when she arrived did she realize she had forgotten her audio kit — recorder, microphone, cables, headphones, everything. Gah. What she had brought with her, though, was her iPhone. She had no choice but to try using that to record or risk losing a big interview. How The New York Times Covers the World - Peter Osnos - National. Dozens of people, from staff to stringers, coordinate to rapidly deliver quality, reported journalism on international issues It is now a month since the New York Times launched its long-awaited paywall plan. Predictably, there have been scattered initial reports about a dip in page views. The need to register an enormous number of digital subscribers has also led to some delays and confusion, or so the anecdotal evidence suggests. #ijf11: Lessons in data journalism from the New York Times. Follow this link or scroll to the bottom to start by hearing more from New York Times graphics editor Matthew Ericson on what kind of people make up his team and how they go about working on a story The New York Times has one of the largest, most advanced graphics teams of any national newspaper in the world.

Yesterday at the International Journalism Festival, NYT deputy graphics editor Matthew Ericson led an in-depth two-hour workshop on his team’s approach to visualising some of the data that flows through the paper’s stories every day. What Impact Has The New York Times Paywall Had on Traffic? [STATS] The New York Times paywall has now been up for two weeks. What impact has it had on the popular website's traffic? More importantly, is the paywall working as intended or is it taking a bite out of The New York Times's revenues? Experian Hitwise thinks it has the answer to the first question.

After going live in early March the site claims to already have more than $20,000 in backing from the public A new platform for crowdfunded photojournalism which aims to build a community around projects has received more than $20,000 in backing, just over a week since it went live. Why Curation Is Important to the Future of Journalism. A Cocktail Party With Readers. On The Media: This Week. Facebook's Growing Role in Social Journalism. A Facebook-only news organization? Harmonic Aftershock: News and Journalism. Full Interview: Egyptian professor in Boston weighs in on country's future. How Entrepreneurial Journalism Will Change Our World. January 24, 2011 | 4 Comments. Newspaper Sites Generate Big Traffic In Q4.