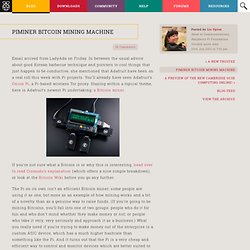 In between the usual advice about good Korean barbecue technique and pointers to cool things that just happen to be conductive, she mentioned that Adafruit have been on a real roll this week with Pi projects. You’ll already have seen Adafruit’s Onion Pi, a Pi-based wireless Tor proxy. The Pros & Cons of Bitcoin - LeWeb London 2013. How Bitcoin Works Under the Hood. Bitcoin Cryptocurrency Crash Course with Andreas Antonopoulos - Jefferson Club Dinner Meetup. How Bitcoin Works Under the Hood. CEX.io – Bitcoin Cloud Mining. Do you want to mine Bitcoin without having to pay for expensive and noisy mining equipment? 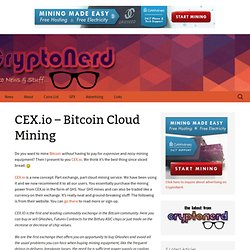 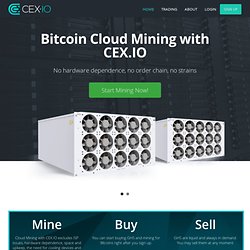 Here you can buy or sell GHashes or just trade on the increase or decrease of chip values. We are the first exchange that offers you an opportunity to buy GHashes and avoid all the usual problems you can face when buying mining equipment, like the frequent delays in delivery, breakage losses, the need for a sufficient power supply or cooling devices, and many other things, that you will probably encounter. 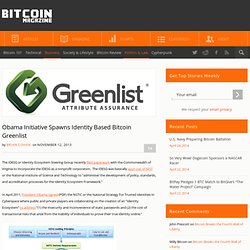 The IDESG was basically spun out of NIST or the National Institute of Science and Technology to “administer the development of policy, standards, and accreditation processes for the Identity Ecosystem Framework.” In April 2011, President Obama signed (PDF) the NSTIC or the National Strategy For Trusted Identities In Cyberspace where public and private players are collaborating on the creation of an “Identity Ecosystem” to address “(1) the insecurity and inconvenience of static passwords and (2) the cost of transactional risks that arise from the inability of individuals to prove their true identity online.” Image via “Interim Identity Ecosystem: “Are we there yet?”” Payment Pathways (PPI) describes itself as a company that “makes it safe to transfer ownership of assets electronically. 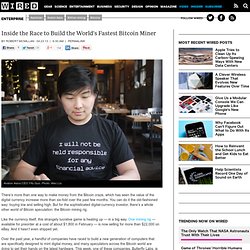 Photo: Alec Liu There’s more than one way to make money from the Bitcoin craze, which has seen the value of the digital currency increase more than six-fold over the past few months. Scrypt. In cryptography, scrypt is a password-based key derivation function created by Colin Percival, originally for the Tarsnap online backup service.[1] The algorithm was specifically designed to make it costly to perform large-scale custom hardware attacks by requiring large amounts of memory. 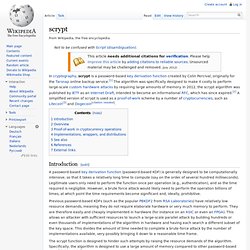 In 2012, the scrypt algorithm was published by IETF as an Internet Draft, intended to become an informational RFC, which has since expired.[2] A simplified version of scrypt is used as a proof-of-work scheme by a number of cryptocurrencies, such as Litecoin[3] and Dogecoin[citation needed]. Introduction[edit] A password-based key derivation function (password-based KDF) is generally designed to be computationally intensive, so that it takes a relatively long time to compute (say on the order of several hundred milliseconds). Legitimate users only need to perform the function once per operation (e.g., authentication), and so the time required is negligible. Overview[edit] See also[edit] References[edit]

Bitcoin Exchange GBL Holding $4.1 Million Vanishes. REUTERS/Jim Urquhart A Chinese Bitcoin exchange that held up to $4.1 million in users' accounts has gone offline and everyone involved with it has vanished, according to CoinDesk. 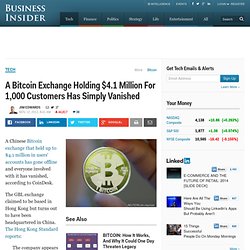 The GBL exchange claimed to be based in Hong Kong but turns out to have been headquartered in China. The Hong Kong Standard reports: The company appears to have launched in May 2013, with its domain btc-glb.com registered on 9th May and a post later that month by Bitcoin Talk forum user zhaoxianpeng promoting the site. Some mainlanders went to the IFC office listed on its website, but this turned out to be a false address. Fourteen of them made a report to the Hong Kong police. Foreign Currency and Currency Exchange Rates. You must express the amounts you report on your U.S. tax return in U.S. dollars. 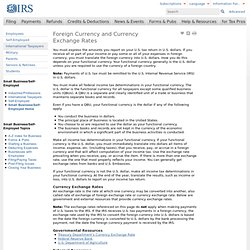 If you receive all or part of your income or pay some or all of your expenses in foreign currency, you must translate the foreign currency into U.S. dollars. How you do this depends on your functional currency. Your functional currency generally is the U.S. dollar unless you are required to use the currency of a foreign country. Note: Payments of U.S. tax must be remitted to the U.S. Internal Revenue Service (IRS) in U.S. dollars. Law and Language. First published Thu Dec 5, 2002; substantive revision Mon Aug 9, 2010 Political philosophers are not generally preoccupied with questions in the philosophy of language. 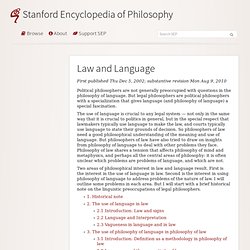