Crypto-Patriarchy: The problem of Bitcoin's male domination. Imagine a scenario 10 years from now in which Bitcoin has managed to establish itself as an important global currency, supported by a myriad of Bitcoin companies, trade associations, and educational institutions. 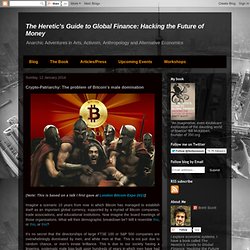 Now imagine the board meetings of those organisations. What will their demographic breakdown be? Rich get Richer effect empirically observed in Bitcoin’s evolution. Excerpted from Technology Review, which reviews a arxiv published study: “In 2011, however, BitCoin began to get significant media coverage which attracted many more users. 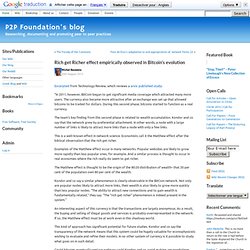 The currency also became more attractive after an exchange was set up that allowed bitcoins to be traded for dollars. During this second phase, bitcoins started to function as a real currency. The team’s key finding from this second phase is related to wealth accumulation. Kondor and co say that the network grew by preferential attachment.

Bitcoin : derrière la bulle, de vrais débats. Bitcoin Has A Kill Switch; And How To Disconnect It. “There are three classes of people: Those who see. 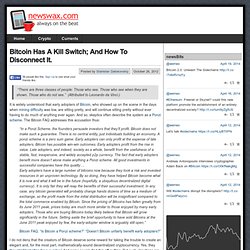 Those who see when they are shown. Those who do not see.” (Attributed to Leonardo da Vinci.) It is widely understood that early adopters of Bitcoin, who showed up on the scene in the days when mining difficulty was low, are sitting pretty, and will continue sitting pretty without ever having to do much of anything ever again. And so, skeptics often describe the system as a Ponzi scheme. Game over, Bitcoin. Long live human-based currencies! While being a tremendous proof of concept, the distributed cryptocurrency Bitcoin is fundamentally flawed as an alternative money system, critics say. It is now time for truly radical monetarists to build on this technical experiment and move to the next level of the monetary revolution: a truly human-based digital monetary system.

Wary of Bitcoin? A guide to some other cryptocurrencies. It might have passed you by, but an essential part of the internet's infrastructure took a heavy knock last week. 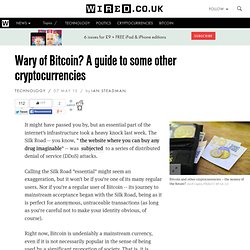 The Silk Road -- you know, " the website where you can buy any drug imaginable" -- was subjected to a series of distributed denial of service (DDoS) attacks. Calling the Silk Road "essential" might seem an exaggeration, but it won't be if you're one of its many regular users. The Well Deserved Fortune of Satoshi Nakamoto, Bitcoin creator, Visionary and Genius. I won’t discuss anything in this post. 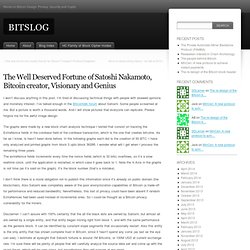 I’m tired of discussing technical things with people with skewed opinions and monetary interest. I’ve talked enough in the Bitcointalk forum about Satoshi. Some people screamed at me. But a picture is worth a thousand words. And I will show pictures that everyone can replicate. The graphs were made by a new block chain analysis technique I tested that consist on tracking the ExtraNonce fields in the coinbase field of the coinbase transaction, which is the one that creates bitcoins. Les Bitcoin obsessives - Towards a leisure society. The environmental cost of Bitcoin « Mktgeist blog. Une banque française autorisée à transférer des Bitcoins. 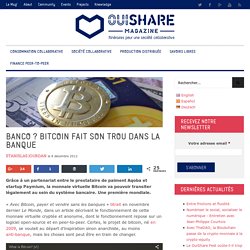 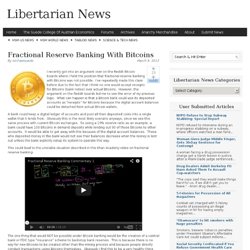 I’ve repeatedly made this claim before due to the fact that I think no one would accept receipts for Bitcoins (bank notes) over actual Bitcoins. However, the argument on the Reddit boards led me to see the error of my previous logic. What can happen is that a Bitcoin bank could use its deposited accounts as “receipts” for Bitcoins because the digital account balances could be detached from actual Bitcoin wallets. A bank could keep a digital ledger of accounts and pool all their deposited coins into a single wallet that it lends from. Bitcoin, une devise complémentaire universelle. La pertinence des devises complémentaires a été fortement soulignée par l’émergence d’une économie mondialisée et financiarisée, au sein de laquelle les Etats luttent pour la croissance et les excédents commerciaux. 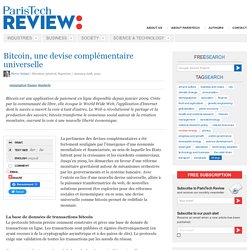 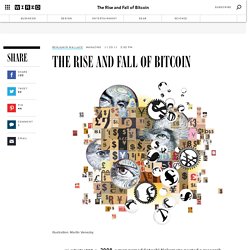 None of the list’s veterans had heard of him, and what little information could be gleaned was murky and contradictory. Bitcoin in France: first legal decision directly related to Bitcoin? A few people around here know about the legal drama currently happening in France between us (Tibanne, MtGox and Macaraja, the company representing us in France) and french banks. 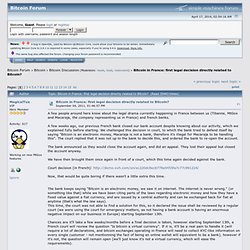 A few weeks ago, our previous French bank closed our bank account despite knowing about our activity, which we explained fully before starting. We challenged this decision in court, to which the bank tried to defend itself by saying "Bitcoin is an electronic money, Macaraja is not a bank, therefore it's illegal for Macaraja to be handling this". The court replied that it was not up to the bank to decide this, and ordered the bank to re-open the account.

The bank announced us they would close the account again, and did an appeal. They lost their appeal but closed the account anyway. We have then brought them once again in front of a court, which this time again decided against the bank. Court decision (in French): Cryptocurrency. When the virtual currency bitcoin was released, in January 2009, it appeared to be an interesting way for people to trade among themselves in a secure, low-cost, and private fashion. The Bitcoin network, designed by an unknown programmer with the handle “Satoshi ­Nakamoto,” used a decentralized peer-to-peer system to verify transactions, which meant that people could exchange goods and services electronically, and anonymously, without having to rely on third parties like banks. Its medium of exchange, the bitcoin, was an invented currency that people could earn—or, in Bitcoin’s jargon, “mine”—by lending their computers’ resources to service the needs of the Bitcoin network.

Once in existence, bitcoins could also be bought and sold for dollars or other currencies on online exchanges. What Bitcoin Is, and Why It Matters. Virtual currency: Bits and bob. Bitcoin – Pirate’s Gold or new Global Currency? On July 19th this year, a Doctor Nefario arrived at Seattle airport and was asked if he had enough money to cover his stay in the US. He replied that he did, but it was in Bitcoin, an electronic cryptographic currency. Unfortunately, not only did the Customs and Border Protection Authority not know what Bitcoin was, they didn’t accept it as a valid currency and so refused him entry. The Customs and Border Protection’s ignorance of Bitcoin is shared by many, even though there are currently around 63.6 million USD of Bitcoin in circulation.

This may seem trivial in comparison to the approximately $950 billion US dollars in circulation. Bitcoin: de la révolution monétaire au Ponzi 2.0. Bitcoin and ethics. Recently I have been following and participating in some political discussions on IRC and the Bitcoin forums. What has impressed me is the diversity of political opinions expressed in relation to Bitcoin. In one discussion you can find a person defending libertarian islands, while in another someone else is espousing the virtues of socialism. Although it would be fair to say that the majority of those who express their opinions on these fora are skeptical of the state and critical of the status quo, you also find quite a few who support traditional parties, their platforms, and representational politics as conducted in North America and Europe.