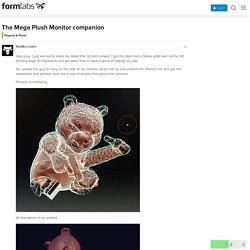 I got the idea from a fellow artist over not he 3D printing page on Facebook and decided I had to have a good at making my own. So I posed this guy to hang on the side of my monitor, sliced him up and printed him. Primed him and got him assembled and painted. here are a load of photos throughout the process. Process of hollowing All the pieces to be printed The printing All Printed Primed Base coat Final thing Hope you guys dig it, and if you have any questions about the process, i'm more than happy to answer them. Review: Ultimaker 2 3D Printer. Ultimaker 3D Printer: Best in Shootout for overall print quality. 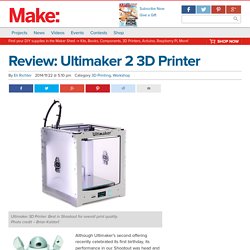 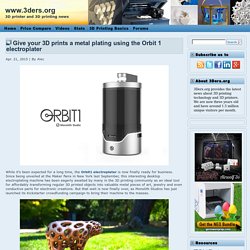 Since being unveiled at the Maker Faire in New York last September, this interesting desktop electroplating machine has been eagerly awaited by many in the 3D printing community as an ideal tool for affordably transforming regular 3D printed objects into valuable metal pieces of art, jewelry and even conductive parts for electronic creations. But that wait is now finally over, as Monolith Studios has just launched its Kickstarter crowdfunding campaign to bring their machine to the masses. The excitement the Orbit 1 created with its sneak peak in 2014, was quite understandable. While several portions of the machine were still wrapped in mystery, this electroplating machine seemed to be a perfect addition to any desktop-based (and therefore financially limited) manufacturing space. The Monolith team Timelapse of the Orbit1 in action. Measure and calibrate.

Use #3DBenchy to test and calibrate your 3D printer by adjusting hardware and software settings for optimal results. 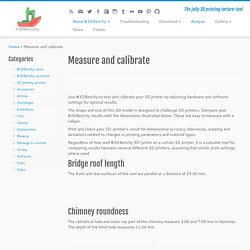 The shape and size of this 3D model is designed to challenge 3D printers. Compare your #3DBenchy results with the dimensions illustrated below. These are easy to measure with a caliper. Print and check your 3D-printer’s result for dimensional accuracy, tolerances, warping and deviations related to changes in printing parameters and material types. Untitled. In an ideal world, 3D prints would all come out of our printers ready to go. 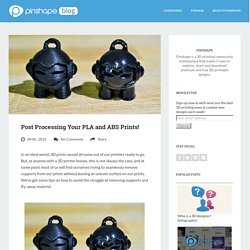 But, as anyone with a 3D printer knows, this is not always the case, and at some point most of us will find ourselves trying to seamlessly remove supports from our prints without leaving an uneven surface on our prints. We’ve got some tips on how to avoid the struggle of removing supports and fly-away material. Acetone vapor smoothed parts. Courtesy of Kenny Janssens. 1. The first step in dealing with supports actually comes before you start printing, in your slicer software. Tomooyamaji.com: Top Page. Japanese artist creates awesome 3D printed transforming robot 'Stingray'

Apr. 6, 2015 | By Alec It hardly needs repeating here that 3D printing technology is perfect for designing and creating awesome toys and robots, so it’s hardly surprising that the internet is full of downloadable designs. 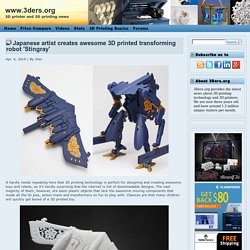 The vast majority of them, however, are basic plastic objects that lack the awesome moving components that made all the GI joes, action mans and transformers so fun to play with. Chances are that many children will quickly get bored of a 3D printed toy. The 3D printed T060101 STINGRAY is a spaceship that easily transforms into a giant robot. But there are some exceptions! As he explains to 3ders.org, a 3D printing toy project seamlessly fit into his contemporary style. But unlike his usual creations, the T060101 STINGRAY has been designed with Shapeways, rather than an exhibition hall, in mind.

As the designer explained, he completely designed the T060101 STINGRAY in the ever-popular Rhinoceros CAD software, and comprises an incredible 67 parts. Mostly Harmless Arms. Creating 3D printed soft dart weapons with Mostly Harmless Arms. Apr. 1, 2015 | By Simon Similar to paintball and laser tag, soft dart blasters such as those made by Nerf have provided hours of group battle entertainment for both kids and adults alike. 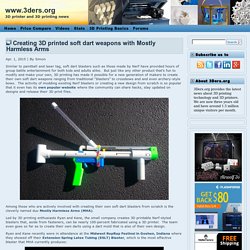 But just like any other product that’s fun to modify and make your own, 3D printing has made it possible for a new generation of makers to create their own soft dart weapons ranging from traditional “blasters” to crossbows and and even archery-style bows. The activity of modding existing Nerf blasters or creating a new design from scratch is so popular that it even has its own popular website where the community can share hacks, stay updated on designs and release their 3D print files. Among those who are actively involved with creating their own soft dart blasters from scratch is the cleverly named duo Mostly Harmless Arms (MHA).

The ESLT blaster features a design that allows a user to look directly down the barrel for better accuracy when firing. Phi Vu - Digital Sculpting and 3D Modeling - 3D Printing. Lite6 - A high quality, low cost HotEnd for everyone. Posted On: 2015-04-01 13:32:47 ; Read: 403 time(s) Introduction We know that not everybody needs the all-metal high-temperature performance of an E3D-v6. 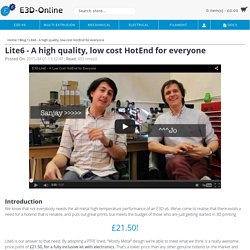 We’ve come to realise that there exists a need for a hotend that is reliable, and puts out great prints, but meets the budget of those who are just getting started in 3D printing. Prismlab China Ltd. About us Prismlab introduction Prismlab China Ltd is a high technology enterprise integrated with optical, mechanical, electrical technology, software and hardware, and meanwhile a professional manufacturer engaged in R&D, manufacturing, selling, and services. 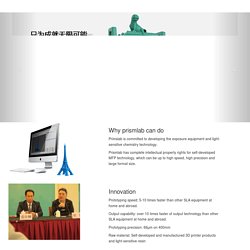 Its product spread across the world. Previously Prismlab was devoted to products making and has achieved the leading level of the world. Prismlab’s products passed the CE, and was approved by China National Center for Quality Supervision Test of Camera. In 2013, Prismlab successfully developed the patented SLA 3D Rapid Prototyping printing products and the mating light-sensitive resin, characteristic in its prototyping speed, high precision, and large format size. 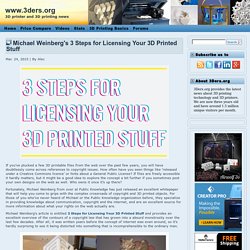 How often have you seen things like ‘released under a Creative Commons licence’ or hints about a General Public License? If files are freely accessible it hardly matters, but it might be a good idea to explore the concept a bit further if you sometimes post your own designs on the web as well. Who owns it once it’s up there? Fortunately, Michael Weinberg from over at Public Knowledge has just released an excellent whitepaper that will help you come to grips with the complex crossroads of copyright and 3D printed objects. Michael Weinberg's article is entitled 3 Steps for Licensing Your 3D Printed Stuff and provides an excellent overview of the contours of a copyright law that has grown into a absurd monstrosity over the last few decades.

New Gizmo 3D's super-fast DLP 3D printer creates objects in 6 minutes. Mar. 25, 2015 | By Alec While every new 3D FDM printer on the market promises revolutionary building speeds and unimaginable printing quality, we have to be realistic and say that FDM 3D printers probably won’t reach those quality levels we all fantasize about for a long time. While perfect for prototyping, designing and having fun with, if you’re looking for a 3D printer capable of producing marketable products, the safest best is probably still DLP/SLA technology.

VFX artist uses Luxology MODO and a Form 1+ to create amazing 3D printed zoetropes. Mar. 25, 2015 | By Simon Although additive manufacturing technologies have contributed to advancements in other ‘futuristic’ arenas including drones and virtual reality, some of the best applications for 3D printing have been in re-imagining age-old technologies with an updated twist. Having run the successful VFX company EyelandArts, visual effects (VFX) artist Alexandrovich Friderici has expanded his skill set and is currently bringing the creative freedom given to him while working on films such as Pan's Labyrinth and Sin City to the tangible world thanks to 3D printing. Among the other projects he has been working on recently include 3D printed zoetropes. A zoetrope is a pre-film animation device that produces an illusion of motion by displaying a sequence of movements made from either handdrawn images, photographs or 3D models similar to a flipbook.

My Mini Factory - 3D printing Glossary. He’re is are glossary with all the vocabulary you need to know about 3D printing. If you are looking for a specific word, you can find it easily by using the “search” command (ctrl + f on Windows). 3D scanner: A device that uses lasers to “record” the state of a physical object and render it digitally in 3D Acrylonitrile Butadiene Styrene is a commonly used non-biodegradable thermoplastic. 3D Printing resolution on plastic. Is 3D printing resolution a topic you’re following at Sculpteo?

Absolutely! As a lot of our clients produce mechanical parts, we have set up calibrating processes and quality control measures to ensure consistency and repeatability of a part. It’s imperative for direct digital manufacturing: when you’re producing hundreds or thousands of parts that will be assembled in a final product, you need to ensure that you are delivering exactly the same thing every time you make the piece. That being said, there are limitations to the technology, and there is a limitation between the dimensions of a CAD file and the dimensions of the final product. How does the laser sintering factor the printing resolution? Edge 3D Printer - an affordable open source 3D printer! The 3D printing file marketplace. Test your 3D printer! by ctrlV. Sub 30$ 3D laser scanner by Ferretti.

MAKEX. 3Due Design. ToyFabb - 3D Printing your own toys. The 3D printing file marketplace. 3D Printing Models. Authentise. Nano Sculptures by Jonty Hurwitz — Jonty Hurwitz. Just how small is “nano?” In the International System of Units, the prefix “nano” means one-billionth, or 10-9; therefore one nanometer is one-billionth of a meter. It’s difficult to imagine just how small that is, so here are some examples: Cura update. Cura 13.05 user manual Welcome to the Cura 13.05 user-manual. If you are a new user, jump to #Using Cura for the first time If you have used an older version of Cura before, then jump to #Cura 13.05 for users of older versions of Cura. YouMagine.com.

Something3d within reach - our printers. ExtrusionBot announces EB2 3D printer filament extruder, Spooler and Cruncher. Jan 27, 2015 | By Alec Veterans of desktop 3D printing might have picked up on a curious notion in the supply/demand equation of their hobby: while 3D printers are steadily becoming more affordable, filament spools are seemingly impervious to market mechanisms, inflation or deflation. In short, they seem to always cost the same no matter what. Even the cheapest spools tend to be around or above $30, and we seem to go through them will tremendous speed; especially if you print a bit carelessly and just turn on your machine to 'see what happens' with a certain design. If you recognize yourself in this, then a filament extruder might be a nice solution; machines that, in a nutshell, turn plastic pellets and coloring agents into spools of filament in the comfort of your own home.

Pellets for PLA filament. If ExtrusionBot sounds familiar to you, that’s probably because you’ve seen their models around the web. Download, edit and print your own parts from McMaster-Carr. Untitled. Mini-cars, bracelets, cookie cutters, desserts, shirts – the possibility of what you can make on even a small desktop (FDM) 3D printer is nearly endless. Almost as endless, is the list of possibilities of who can design these amazing toys, trinkets and tools. Thanks to free tools, creative people, and the art of the search engine plus YouTube tutorial combination – we’re finding that the face of these 3D designers is changing, evolving and just as exciting as the designs that they create. 3dDruck Ninja. Ultimaker 2, Go and Extended Ultimaker hat auf der diesjährigen CES zwei neue Modelle gezeigt, einen kleineren und mobileren Ultimaker Go und ein Extended Model mit mehr Höhe im Druckraum.