Activity 5. Child Social Experiment Looks At Gender Equality. Examining the Gender Pay Gap in Elite Sports - WITI. The fight for gender equality is an ongoing battle despite the tremendous progress made in the past few decades. 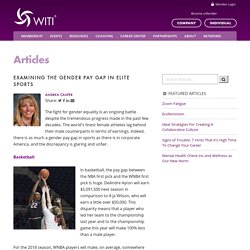 The world's finest female athletes lag behind their male counterparts in terms of earnings. Indeed, there is as much a gender pay gap in sports as there is in corporate America, and the discrepancy is glaring and unfair. Basketball In basketball, the pay gap between the NBA first pick and the WNBA first pick is huge. DeAndre Ayton will earn $5,091,500 next season in comparison to A'ja Wilson, who will earn a little over $50,000. For the 2018 season, WNBA players will make, on average, somewhere around $79,000 with veterans who have been in the league for at least six years and are eligible for a maximum salary of $115,500.

Tennis Tennis has been hailed as a leader in gender equality among major sports, and the numbers seem to show that—at least when it comes to the four Grand Slam tournaments and a handful of high-profile events. PFA landmark deal in inaugural W-League CBA. UPDATE: A YEAR ago there was no minimum wage as many W-League players were left out-of-pocket, but a landmark deal now means no player will earn less than $10,000. 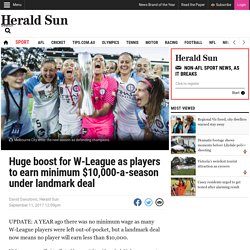 W-League pays will virtually treble overnight, with each club’s base payments lifting from $50,000 to $180,000 and minimum W-League spend rising from $450,000 to $1.62 million. The figures will rise again in 2018, to $12,287 (minimum salary), $221,166 (club base spend) and $1.99 million (overall W-League spend). While the move stops short of the players’ union’s ambitious 60 at 60 vision unveiled last February, the W-League’s first Collective Bargaining Agreement is a huge leap towards W-League professionalism. Last year’s Professional Footballers Australia report laid bare woeful W-League conditions, revealing most women’s players will consider quitting the game unless conditions improve with 85 per cent earning less than $5000 per season.

The players have said that they play more games than the men’s team — and win more of them — yet still receive less pay. They said “institutionalized gender discrimination” affected not only their paychecks, but also where they played and how often, how they trained, the medical care and coaching they received, and even how they traveled to matches. They are not alone in their fight for fairer pay and better treatment. Here are eight times in recent memory when women fought for equality in sports. Experts claimed for years that distance running was damaging to women’s health and femininity. In 1967, women weren’t allowed to officially enter the Boston Marathon, so Kathrine Switzer entered that year as “K.V. Women were officially allowed to enter the race in 1972. Long Island's & NYC's News Source. A History Of Transgender Athletes. Timeline of Women in Sports. Before 1800 Only prostitutes or virgins were allowed to spectate at the Ancient Olympic games, as married women were banned. 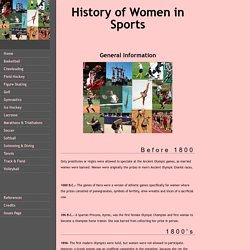 Women were originally the prizes in men's Ancient Olympic Chariot races. 1000 B.C..- The games of Hera were a version of athletic games specifically for women where the prizes consisted of pomegranates, symbols of fertility, olive wreaths and slices of a sacrificial cow. 396 B.C..- A Spartan Princess, Kynisc, was the first female Olympic Champion and first woman to become a champion horse trainer. She was barred from collecting her prize in person. 1800's 1896- The first modern Olympics were held, but women were not allowed to participate. 1896- 1981- There were no female members of the International Olympic Committee.