Experts Say Gen Z Isn't Prepared For The Workplace, But It Isn't All Their Fault. Some experts believe Gen Z isn't mentally prepared to enter the workforce. 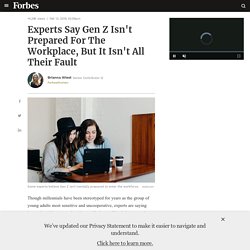 Unsplash Though millennials have been stereotyped for years as the group of young adults most sensitive and uncooperative, experts are saying issues that older generations have with them will pale in comparison to what's ahead for Gen Z. In fact, significant research is showing not only that there's an ongoing mental health crisis in the United States and beyond, but that the effects of it are most transparent in young adults entering the workforce now. With the first class of them having just graduated, bosses and managers are finding themselves unprepared for a generation that thinks and works differently than any before. Just this week, the journal JAMA Pediatrics reported that 1 in 7 young adults and children have mental health conditions, though only half are receiving treatment. Why is this happening? How did we get here? Dr. What's going wrong? 1. 2. 3. What do we do now? Unsplash Why is this happening? Dr. 1. Juul ad study finds company targeted youth from beginning.

Juul, the Silicon Valley startup that’s taken over three-quarters of the US e-cigarette market, has repeatedly declared it is in the business of helping adult smokers quit tobacco. 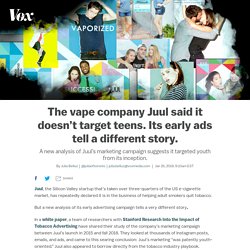 But a new analysis of its early advertising campaign tells a very different story. In a white paper, a team of researchers with Stanford Research Into the Impact of Tobacco Advertising have shared their study of the company’s marketing campaign between Juul’s launch in 2015 and fall 2018. They looked at thousands of Instagram posts, emails, and ads, and came to this searing conclusion: Juul’s marketing “was patently youth-oriented.” Juul also appeared to borrow directly from the tobacco industry playbook. That’s an important finding, given that the youth vaping trend, which coincided with Juul’s explosion on the market, is viewed as a new public health crisis.

This crisis has captured the attention of federal regulators, including the Food and Drug Administration. Absent from these ads was any adult smokers. Generation Z Looks a Lot Like Millennials on Key Social and Political Issues. Among Republicans, Gen Z stands out in views on race, climate and the role of government By Kim Parker, Nikki Graf and Ruth Igielnik No longer the new kids on the block, Millennials have moved firmly into their 20s and 30s, and a new generation is coming into focus. 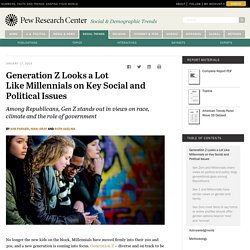 Generation Z – diverse and on track to be the most well-educated generation yet – is moving toward adulthood with a liberal set of attitudes and an openness to emerging social trends. On a range of issues, from Donald Trump’s presidency to the role of government to racial equality and climate change, the views of Gen Z – those ages 13 to 21 in 2018 – mirror those of Millennials. How Generation-Z Will Revolutionize The Workplace. The workplace is about to change. 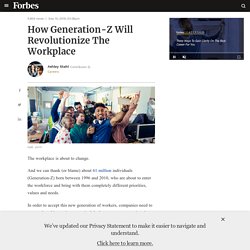 And we can thank (or blame) about 61 million individuals (Generation-Z) born between 1996 and 2010, who are about to enter the workforce and bring with them completely different priorities, values and needs. In order to accept this new generation of workers, companies need to prepare by taking action now...And the best way to prepare is to better understand them. Here are four key attributes that Generation-Z have, which will uproot how companies operate and engage with employees. 1.

Their high-tech minds don’t trump human needs. Generation-Z is the first fully digital generation, and yet, they yearn for human interaction at work. If you’re managing a Gen-Z employee, offering your time to give them feedback or ask how their project is going will do wonders for their productivity and work output. This generation seeks a collaborative, team-friendly environment and craves positive relationships at work that go beyond online or social media contact. 2. 3. 4.

Managers Not Too Enthusiastic About Generation Z Coming to Work. They'll be difficult to manage, hard to communicate with and won't have a particularly strong work ethic. 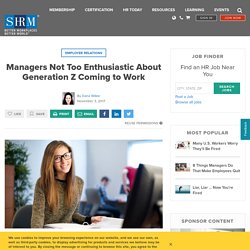 While that may sound like what older generations were saying about Millennials not too long ago, it's also what some workplace managers are now saying about the latest addition to the workforce—Generation Z. Generation Z members—generally, those born from the mid-1990s to the mid-2000s—are just now entering the workforce. And they haven't particularly impressed their more-seasoned co-workers, according to a new poll from APPrise Mobile, a mobile employee communications tool. Poll: Half Of Millenials, Gen Z Want To Live Under Socialism. A Harris Poll has revealed that almost 50 percent of young Americans would like to live in under a socialist government. 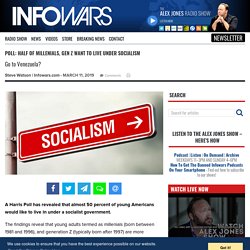 The findings reveal that young adults termed as millenials (born between 1981 and 1996), and generation Z (typically born after 1997) are more supportive of socialist principles than older Americans. While 49.6 percent of young adults said they would “Prefer living in a socialist country,” only 37.2 percent of other adults expressed the same desire. The poll also found that two thirds of all Americans believe the government should provide universal healthcare, with over half again saying that it should provide tuition-free college. Axios, who commissioned the poll, notes that “Gen Z and millenials are projected to make up 37% of the electorate in 2020, and what they’re looking for in a presidential candidate is shifting.” Sanders kicked off his 2020 presidential campaign Sunday by claiming that his policies are being embraced “across the board” by Democrats.