exploring nature with a good home brew is the best part of my day. Likes to cooking, camping and hiking.

Camping made easy: Now you can get a fully packed van delivered to your doorstep. Love camping but hate the hassle of picking up a rental? 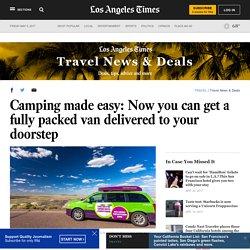 Jucy RV Rentals rolls out new services that make pickups and drop-offs easier. The New Zealand-based company will bring one of its funky purple-and-green tricked-out minivans (they call them RVs) to your door, provided you are within 50 miles of their offices. They’ll pick it up too. Cost for the service starts at $35 one way. In addition, Jucy locations will be open 24/7, for those doing their own pickup or drop-off. By the way, RV rentals are easy-to-drive minivans that have been adapted for foolproof camping. If you want to rent a Jucy RV in L.A. for Memorial Day weekend, expect to pay $127 to $130 a night, according to the website. Cooking with cannabis: Cook's Science explores a complicated culinary trend. Cooking with new and unique ingredients can be tricky. 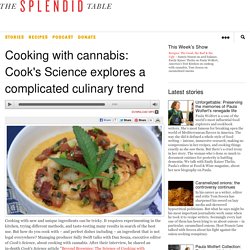 It requires experimenting in the kitchen, trying different methods, and taste-testing many results in search of the best use. But how do you cook with – and perfect dishes including – an ingredient that is not legal everywhere? Managing producer Sally Swift talks with Dan Souza, executive editor of Cook’s Science, about cooking with cannabis. After their interview, he shared an in-depth Cook’s Science article "Beyond Brownies: The Science of Cooking with Cannabis" on the topic. How to Fit Nature into Everyday Life When You Live in a City. What It's Like to Be Part of an American Cooking Power Couple.

A Better Way To Meet Hawaii's Needs: Invest In Nature - Honolulu Civil Beat. In Hawaii and across the country, we all depend on healthy lands and waters for jobs, food, security and prosperity. 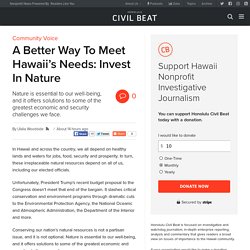 In turn, these irreplaceable natural resources depend on all of us, including our elected officials. Unfortunately, President Trump’s recent budget proposal to the Congress doesn’t meet that end of the bargain. It slashes critical conservation and environment programs through dramatic cuts to the Environmental Protection Agency, the National Oceanic and Atmospheric Administration, the Department of the Interior and more. Conserving our nation’s natural resources is not a partisan issue, and it is not optional. Nature is essential to our well-being, and it offers solutions to some of the greatest economic and security challenges we face. Top 10 Best Family-Friendly Campgrounds. 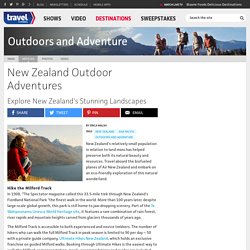 Travel aboard the biofueled planes of Air New Zealand and embark on an eco-friendly exploration of this natural wonderland. Hike the Milford TrackIn 1908, "The Spectator magazine called this 33.5-mile trek through New Zealand's Fiordland National Park "the finest walk in the world. More than 100 years later, despite large-scale global growth, this park is still home to jaw-dropping scenery. Part of the Te Wahipounamu Unesco World Heritage site, it features a rare combination of rain forest, river rapids and mountain heights carved from glaciers thousands of years ago.

Forbes Welcome. New Zealand Outdoor Adventures - Outdoors And Adventure - TravelChannel.com. Whale's Tail Pale Ale - Beer Recipe - American Homebrewers Association. Homebrewers Association Those plants that are more important to the survival of man, or which have stimulating …More Chew, Spit, Brew: How to Make Chicha Beer Since the Pilgrims landed on Plymouth Rock, brewing beer has been an integral component of …More What Would Ben Franklin Drink? 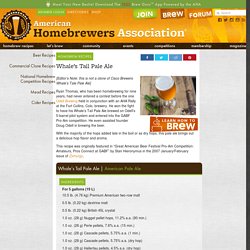 By Duncan Bryant, AHA Web Coordinator I first heard of Grätzer (also commonly known as Grodziskie) …More. China announces ban on ivory trade by end of 2017. Image copyright AFP China has announced a ban on all ivory trade and processing activities by the end of 2017. 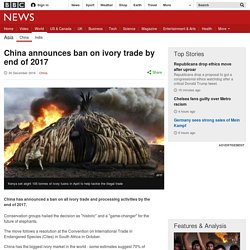 Conservation groups hailed the decision as "historic" and a "game-changer" for the future of elephants. The move follows a resolution at the Convention on International Trade in Endangered Species (Cites) in South Africa in October. China has the biggest ivory market in the world - some estimates suggest 70% of the world's trade ends up there. First Cases of Jamaican-Produced Red Stripe Arrive in U.S. White Plains, NY – The first cases of iconic Red Stripe Beer, produced once again in the brand’s homeland of Jamaica, arrive on U.S. retail store shelves and bar & restaurant beer menus as the brand readies its aggressive plan to energize growth in the U.S. 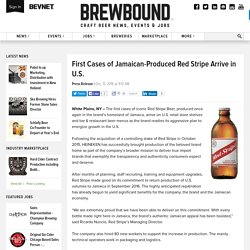 Following the acquisition of a controlling stake of Red Stripe in October 2015, HEINEKEN has successfully brought production of the beloved brand home as part of the company’s broader mission to deliver true import brands that exemplify the transparency and authenticity consumers expect and deserve. After months of planning, staff recruiting, training and equipment upgrades, Red Stripe made good on its commitment to return production of U.S. volumes to Jamaica in September 2016.

The highly anticipated repatriation has already begun to yield significant benefits for the company, the brand and the Jamaican economy.