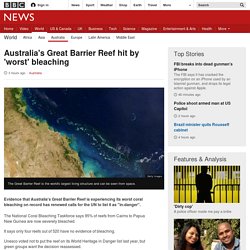 The National Coral Bleaching Taskforce says 95% of reefs from Cairns to Papua New Guinea are now severely bleached. It says only four reefs out of 520 have no evidence of bleaching. Unesco voted not to put the reef on its World Heritage in Danger list last year, but green groups want the decision reassessed. Coral taskforce convener Professor Terry Hughes told the BBC his team was yet to find the southern border where the bleaching ended.

"Tomorrow we will continue further south from Cairns to Townsville about 400km (250 miles) and spend the day scoring another 150 reefs," Professor Hughes said. Experts say it is too early to tell whether the corals will recover, but scientists "in the water" are already reporting up to 50% mortality of bleached corals. Image copyright James Cook University. Ash dieback and beetle attack likely to 'wipe out' ash trees in UK and Europe. Almost all the ash trees in the UK and across Europe are likely to be wiped out by a “double whammy” of a bright green borer beetle and the fungus that causes ash dieback, according to a comprehensive new academic analysis. 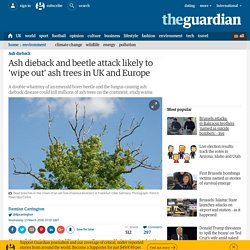 The loss of the ash, one of the most abundant tree species in the UK, would mean losing even more trees than the 15 million elms killed by Dutch elm disease in the 1970s. Ash is the most common hedgerow tree, with 60,000 miles of tree lines. This Short Animation Will Change Your Perspective On Time. Evolution and Darwin. Charles Darwin hardly ever used the word "evolution". 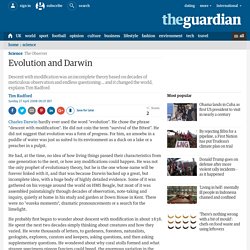 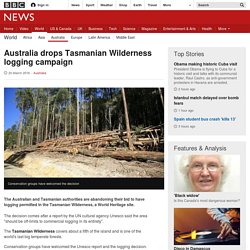 The decision comes after a report by the UN cultural agency Unesco said the area "should be off-limits to commercial logging in its entirety". If We Cared About The Environment Like We Care About Sports. Bioluminescent Bacteria Could Light Up The Streets Of Paris. Ikea to use packaging made from mushrooms that will decompose in a garden within weeks. LONDON — Ikea is planning to use packaging made with mushrooms as an eco-friendly replacement for polystyrene. 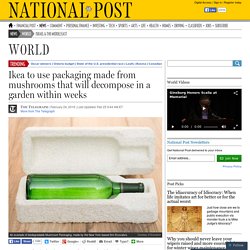 The furniture retailer is looking at using the biodegradable mycelium “fungi packaging” as part of its efforts to reduce waste and increase recycling, Joanna Yarrow, head of sustainability for Ikea in the U.K., said. Mycelium is the part of a fungus that effectively acts as its roots. It grows in a mass of branched fibres, attaching itself to the soil or whatever surface it is growing on. The American company Ecovative developed the product, which it calls Mushroom Packaging, by letting the mycelium grow around clean agricultural waste, such as corn stalks or husks.

Over a few days, the fungus fibres bind the waste together, forming a solid shape, which is then dried to stop it growing any further. Shell being sued in two claims over oil spills in Nigeria. Image copyright Reuters Oil giant Shell is being sued in London for the second time in five years over spills in the Niger Delta. 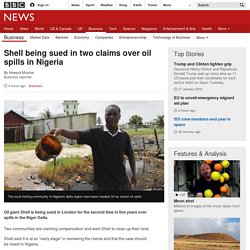 Two communities are claiming compensation and want Shell to clean up their land. Shell said it is at an "early stage" in reviewing the claims and that the case should be heard in Nigeria. UK flooding: How a town in Yorkshire worked with nature to stay dry. While the sodden, submerged North of Britain was, literally, wringing out the old year last week, one notorious Yorkshire flood blackspot was celebrating staying dry – despite having been refused a multimillion pound defence scheme. 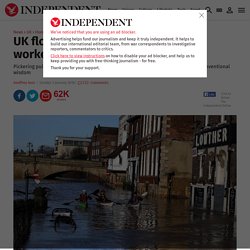 Pickering, North Yorkshire, pulled off protection by embracing the very opposite of what passes for conventional wisdom. On its citizens’ own initiative, it ended repeated inundation by working with nature, not against it. France Declares All New Rooftops Must Be Topped With Plants Or Solar Panels. A new law recently passed in France mandates that all new buildings that are built in commercial zones in France must be partially covered in either plants or solar panels. 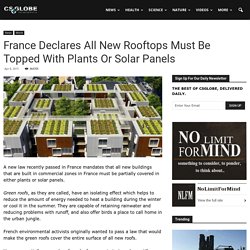 Green roofs, as they are called, have an isolating effect which helps to reduce the amount of energy needed to heat a building during the winter or cool it in the summer. What's the carbon footprint of ... email? Our recent piece on the carbon footprint of the internet generated plenty of coverage, so next up in our map of the world's carbon emissions is … email. 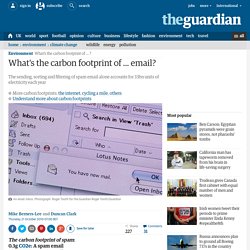 Of course, sending and receiving electronic message is never going to constitute the largest part of our carbon footprints. But the energy required to support our increasingly heaving and numerous inboxes does add up. Very roughly speaking (remember that all complex carbon footprints are really best guesses), a typical year of incoming mail for a business user – including sending, filtering and reading – creates a carbon footprint of around 135kg. That's over 1% of of a relatively green 10-tonne lifestyle and equivalent to driving 200 miles in an average car.

Future - Science & Environment - Why whale poo is good for the oceans... and us. Oceans envelop three-quarters of our planet’s surface. 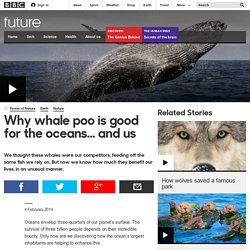 Think dairy farming is benign? Our rivers tell a different story. Eat less meat and fish, drink less milk. No request could be simpler, or more consequential. Nothing we do has greater potential for reducing our impacts on the living planet. Yet no request is more likely to elicit a baffled, hurt or furious response. This point comes across with astonishing force in the film Cowspiracy. I would question some of the figures it uses, but its thesis – we just don’t want to talk about it – is undeniable.

Climate change, water use, forest destruction, river pollution, floods, dead zones in the sea: the impacts of animal farming are massive and global; in many cases greater than those of anything else we do. Livestock keeping is so embedded in our cultural and religious identity that to challenge it is, it seems, to attack the foundations of society. The world’s great monotheistic religions arose among nomadic herders. For millennia we counted our wealth in cattle (otherwise known as chattels, or stock). Let’s focus on this point for a moment. Monbiot.com. Ral worldwide threatened by bleaching - NOAA - BBC News.

Corals worldwide are at risk from a major episode of bleaching which turns reefs white, scientists have confirmed. The bleaching has hit reefs in the Pacific, Atlantic and Caribbean. The US National Oceanic and Atmospheric Administration (NOAA) warned it may affect over 38% of the world's reefs, and kill over 12,000 sq km of reefs. The mass bleaching is caused by rising water temperatures resulting from two natural warm currents and exacerbated by man-made climate change.

The evacuations came after an apparent change in wind direction, and as police confirmed the highly toxic chemical sodium cyanide was found near the site. At least 112 people died in the blasts, officials said on Sunday, and more than 700 have been hospitalised. Officials have identified 24 of the dead, with 88 still to be identified. Remarkably, a man was found alive just 50m from the blast core, Chinese state news agency Xinhua reported.