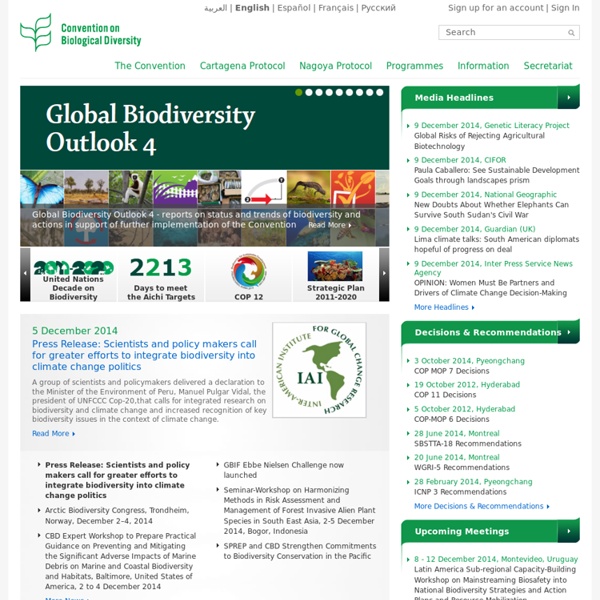 The Biodiversity Hotspots Page Content Life on Earth faces a crisis of historical and planetary proportions. Unsustainable consumption in many northern countries and crushing poverty in the tropics are destroying wild nature. Biodiversity is besieged. Extinction is the gravest aspect of the biodiversity crisis: it is irreversible. While extinction is a natural process, human impacts have elevated the rate of extinction by at least a thousand, possibly several thousand, times the natural rate.

The value of nature itself at the core of a green economy We need to find better ways to evaluate the basis of our ecosystems if we want to create a truly green economy. And regional cooperation can facilitate that task, was the conclusion of a Rio+20 event on the economics of ecosystems and biodiversity. The Rio+20 conference debates how to boost the green economy. But the actual green foundation of our economies and whole livelihood, namely nature itself, is often forgotten in the discussions about growth and job creation. The so called economics of ecosystems and biodiversity (TEEB) tries to put the green back into the discussions about a green economy, so to speak. How forests carry out their own fire suppression management How did forests ever cope before the era of government planned small scale bushfires? Forests had many brilliant systems in place that digested leaf litter, kept the understory damp and a layer of nutrient rich humus at ground level, all operating with clever symbiotic relationships between plants, animals and fungi. Below is just a selection of extracts from research which shows how important these ground layer ecosystems are – and how vulnerable they are to planned government burns. Blue Tongue lizards as fungi dispersers ‘…The authors of the paper given in the next reference button wrote...we observed a large adult Eastern Blue-tongued Lizard Tiliqua scincoides, move towards the base of a mature Coastal Rosemary shrub Westringia fruticosa and commence digging. We realised that the lizard was digging for fungi when it retrieved and quickly consumed a white, ball-shaped mass that had not been visible from the surface.

GBIF : Global Biodiversity Information Facility Try out the new GBIF portal! Why not try out the new GBIF portal at www.gbif.org, which has many more features and includes lots of information about the GBIF community, including great examples of data uses in research and interesting applications? The old GBIF data portal which you are viewing now will continue to be supported until we are satisfied it can be taken down without causing major inconvenience. Be aware that the content here is static and has not been updated since the launch of the new portal on 9 October 2013. Are We Nearing a Planetary Boundary? Josh Haner/The New York TimesReddish and brownish trees in this forest in Montana have been killed by the mountain pine beetle. The beetle population has soared in part because temperatures no longer plunge as low in the winter, so fewer get killed off. The earth could be nearing a point at which sweeping environmental changes, possibly including mass extinctions, would undermine human welfare, 22 prominent biologists and ecologists warned on Wednesday.

Saturday soapbox: ‘Old thinking’ will cost Tasmania jobs Tasmania must factor in changing wood supply and market preference. Source: News Limited IF the incoming Tasmanian Liberal Government remains determined to end the Tasmanian Forest Agreement, it will be at the cost of Tasmanian jobs. Undoing the World Heritage protection that came with the agreement will reintroduce conflict into Tasmanian forest policy — and it is that conflict that destroys markets locally and globally. Do we live in a 'green economy'? New report assesses progress in Europe Green economy is set to be one of the two main themes at the United Nations Sustainable Development Summit in Rio de Janeiro in June this year. Simply put, a 'green economy' is one in which environmental, economic and social policies and innovations enable society to use resources efficiently, while maintaining the natural systems that sustain us. "The focus on green economy in Rio reflects the issue's importance as a key environmental priority, and is particularly timely, given that it can provide a path to renewed economic growth and job creation in response to the current severe economic crises facing Europe," EEA Executive Director Jacqueline McGlade said. The 'Environmental indicator report 2012' presents established indicators that illustrate progress towards improving resource efficiency, and indicators that depict the risk of passing environmental thresholds. European environmental policies have helped Europe use resources more efficiently.

21 reasons why forests are important Forests cover a third of all land on Earth, providing vital organic infrastructure for some of the planet's densest, most diverse collections of life. They support countless species as well as 1.6 billion human livelihoods, yet humans are also responsible for 32 million acres of deforestation every year. The United Nations declared March 21 the International Day of Forests in late 2012, part of a global effort to publicize both the value and plight of woodlands around the world. It was first celebrated March 21, 2013, nestling in between the U.N.'s International Day of Happiness on March 20 and World Water Day March 22. (It's also near tree-centric Tu B'Shevat in January 2016 and Arbor Day in April).

Ecosystem Services of Arctic Sea Ice Need Urgent Economic Valuation London, UK (PRWEB UK) 3 June 2011 The ecosystem services provided by the Arctic sea ice urgently need to be given an economic value, urged polar explorer Pen Hadow today, on the eve of World Environment Day. World Environment Day 2011 (5 June) is themed on forests and the services they provide to the globe. Pen Hadow, polar explorer and founder of environmental sponsorship organisation Geo Mission, said: “We are now starting to quantify and price the services our forests provide to the world, and can therefore begin to trade their benefits in the market.

Tony Abbott's Tasmanian wilderness claim doesn't check out - Fact Check Updated Tue 8 Apr 2014, 5:22pm AEST The Federal Government has applied to have sections of the Tasmanian Wilderness World Heritage Area delisted by the United Nations. If successful, tens of thousands of hectares of land could be reopened to logging and other activities.

Blame Canada by Stephen Leahy – May 30, 2012 The Country Has Become a Petro-State, Happily Drilling for Profits as the World Warms What has happened to Canada? This scary NASA map shows how the world’s forests are going up in smoke LIMA, Peru — The world’s forests are in trouble. If you think we’re joking, then just take a look at this frightening NASA image. Forest fires around the world from May 1-10. (Jacques Descloitres/NASA)