Skim reading is the new normal. The effect on society is profound. Look around on your next plane trip. 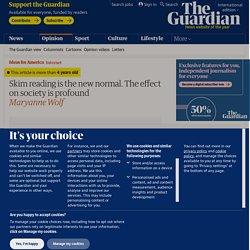 The iPad is the new pacifier for babies and toddlers. Younger school-aged children read stories on smartphones; older boys don’t read at all, but hunch over video games. Parents and other passengers read on Kindles or skim a flotilla of email and news feeds. Unbeknownst to most of us, an invisible, game-changing transformation links everyone in this picture: the neuronal circuit that underlies the brain’s ability to read is subtly, rapidly changing - a change with implications for everyone from the pre-reading toddler to the expert adult.

As work in neurosciences indicates, the acquisition of literacy necessitated a new circuit in our species’ brain more than 6,000 years ago. This is not a simple, binary issue of print vs digital reading and technological innovation. We know from research that the reading circuit is not given to human beings through a genetic blueprint like vision or language; it needs an environment to develop. Brain-Based Learning. Why the Web 3.0 Matters and you should know about it. No grades, no timetable: Berlin school turns teaching upside down. Anton Oberländer is a persuasive speaker. 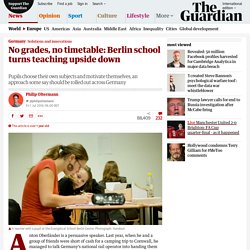 Last year, when he and a group of friends were short of cash for a camping trip to Cornwall, he managed to talk Germany’s national rail operator into handing them some free tickets. So impressed was the management with his chutzpah that they invited him back to give a motivational speech to 200 of their employees. Anton, it should be pointed out, is 14 years old. The Berlin teenager’s self-confidence is largely the product of a unique educational institution that has turned the conventions of traditional teaching radically upside down.

What Keeps Students Motivated to Learn? Educators have lots of ideas about how to improve education, to better reach learners and to give students the skills they’ll need in college and beyond the classroom. 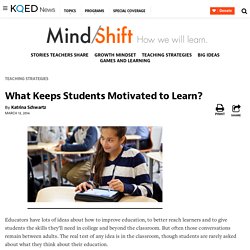 But often those conversations remain between adults. The real test of any idea is in the classroom, though students are rarely asked about what they think about their education. Technology. Teachers’ Most Powerful Role? Adding Context. Lenny Gonzalez Part 3 in the series Learning In the New Economy of Information. 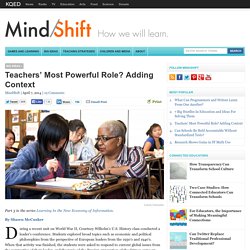 By Shawn McCusker During a recent unit on World War II, Courtney Wilhelm’s U.S. History class conducted a leader’s conference. Students explored broad topics such as economic and political philosophies from the perspective of European leaders from the 1930’s and 1940’s. Marina Gorbis: The Future Of Education Eliminates The Classroom, Because The World Is Your Class — Provided You Have a Hand-Held Device. Massive Open Online Courses might seem like best way to use the Internet to open up education, but you’re thinking too small. 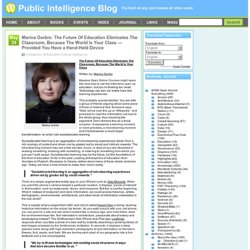 Technology can turn our entire lives into learning experiences. This probably sounds familiar: You are with a group of friends arguing about some piece of trivia or historical fact. Teachers are Heroes [INFOGRAPHIC] It is officially Teacher Appreciation Week, and we’ll continue to celebrate through Friday! 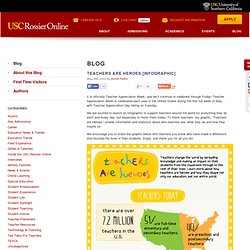 Teacher Appreciation Week is celebrated each year in the United States during the first full week of May, with Teacher Appreciation Day falling on Tuesday. Learning to love the iGeneration.  ECIS TECH CONFERENCE 2013, 14 - 16 March Hosted by ACS Cobham International, London, England Learning to love the iGeneration... and... embrace the irresistible IT vision of tomorrow’s classroom.... 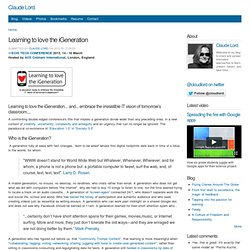 A confronting double edged conference's title that implies a generation divide wider than any preceding ones, in a new context of volatility, uncertainty, complexity and ambiguity and an urgency that can no longer be ignored: The paradoxical co-existence of “Education 1.0” in “Society 3.0” Who is the iGeneration? A generation fully at ease with fast changes, “born to be wired” whose first digital footprints date back in time of a fetus in the womb, for whom "WWW doesn't stand for World Wide Web but Whatever, Whenever, Wherever, and for whom, a phone is not a phone but a portable computer to tweet, surf the web, and, of course, text, text, text".

A mobile generation, no mouse, no desktop, no landlines, who chats rather than email. What’s Lost as Handwriting Fades. Does handwriting matter? 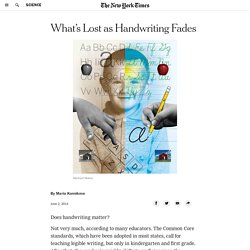 Not very much, according to many educators. The Common Core standards, which have been adopted in most states, call for teaching legible writing, but only in kindergarten and first grade. After that, the emphasis quickly shifts to proficiency on the keyboard. But psychologists and neuroscientists say it is far too soon to declare handwriting a relic of the past. New evidence suggests that the links between handwriting and broader educational development run deep. Children not only learn to read more quickly when they first learn to write by hand, but they also remain better able to generate ideas and retain information. “When we write, a unique neural circuit is automatically activated,” said Stanislas Dehaene, a psychologist at the Collège de France in Paris. “And it seems that this circuit is contributing in unique ways we didn’t realize,” he continued.