An Introduction to Psychology: Psychological Disorders

What is Obsessive Compulsive Disorder? I had a black dog, his name was depression. Mental illness more prevalent among young adults, OCD one of top disorders in S’pore. SINGAPORE — Young adults are most at risk of suffering from mental disorders in Singapore, the latest Singapore Mental Health Study found.

Those aged between 18 and 34 are more likely to have experienced bipolar disorder, major depressive disorder, alcohol abuse, and obsessive compulsive disorder, it said in a report on the findings, which were released on Tuesday (Dec 11). Other socio-demographic factors such as age, gender, marital status, education and income status are also associated with the prevalence of mental disorders. For example, alcohol abuse is more prevalent among the lower-educated, compared with those who have received tertiary education. Dr Mythily Subramaniam, the co-principal investigator of the study, said that this is congruent with universal findings, because those with lower education may have “poor coping mechanisms” and may not understand the dangers of alcohol addiction.

The director of research at IMH added: “But it gets worse over time. OCD clinic. Singapore's Depression Problem. A Social Experiment on Mental Health Stigma. Let’s end stigma of mental illness. More people in Singapore have experienced a mental disorder in their lifetime, study finds.

Many still steer clear of people with mental illness: Poll, Singapore News. Even as more people are seeking outpatient treatment at the Institute of Mental Health (IMH), more than five in 10 respondents in a recent survey indicated they are unwilling to live with, live nearby or work with a person with a mental health condition. The survey, which is the first of its kind by the National Council of Social Service (NCSS), found that most people agree that more needs to be done to reduce societal stigma, yet they are also reluctant to accept them on an individual level.

‘Crazy, weird, scary’: Survey unveils negative labels youths associate with mental illness. SINGAPORE — Researchers have called for regular and compulsory education on mental health for youths, in the wake of a study that found a large proportion of this group having misconceptions of mental illness. Almost half (44.5 per cent) of 940 teenage students polled attached negative and pejorative labels to people with mental illness. “Crazy”, “weird”, “scary”, “stupid” and “dangerous” were among the words that came to mind then the respondents heard the term “mental illness”, reported the study, which was presented at the Frontiers in Mental Health symposium organised by the Institute of Mental Health (IMH) and Nanyang Technological University’s Lee Kong Chian School of Medicine on Tuesday (March 6).

Some 46.2 per cent of the respondents, who were aged between 14 and 18, also said they would be “very embarrassed” if they were diagnosed with a mental illness, while nearly a quarter (22.7 per cent) said they would not want others to know if their relative were mentally ill. Family, bomohs and why mentally-ill aren’t seeking help. While treating mental disorders is in itself a challenge, encouraging access to the treatments has proven to be the bigger challenge. 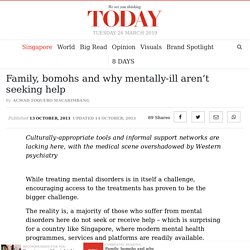 The reality is, a majority of those who suffer from mental disorders here do not seek or receive help – which is surprising for a country like Singapore, where modern mental health programmes, services and platforms are readily available. There have been increased efforts to provide such services and programmes especially in light of the ageing population, and pressures from work and family. It Changed My Life: How a mother lost her 11-year-old son to depression, Singapore News. The three notebooks are filled with doodles, comic strips, riddles and little stories, rendered and written in pencil. 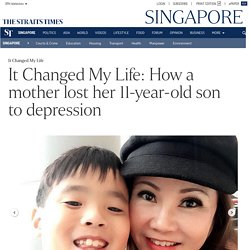 One quirky drawing has a parrot mouthing its response to the poser: What do you get when you cross a centipede with a chicken? Answer: Drumsticks for everyone. The illustrations spring from the fertile imagination of Evan, the eldest of Doreen Kho's four children. The 43-year-old businesswoman says her son once asked her: "Mom, do you know why I started to draw comics? Because my comics will make people smile and laugh. " Ironically, Evan himself wrestled with depression and was often teary. His heartbroken mother says: "It's difficult to say he's in a better place.

Numbers up and ages down for child suicides: experts explain, Latest Singapore News - The New Paper. Some children as young as eight years old are thinking of suicide to cope with their problems, says a psychologist. 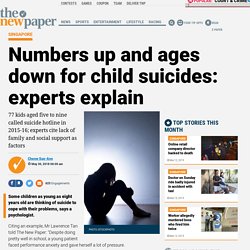 Citing an example, Mr Lawrence Tan told The New Paper: "Despite doing pretty well in school, a young patient faced performance anxiety and gave herself a lot of pressure. "She messaged a family member, saying she felt like a failure and a burden on her parents, and that they would be better off if she were gone. " More kids in Singapore seeking help for mental health issues. SINGAPORE: Depression, relationship issues, bullying, family problems – kids as young as five years old are seeking help for these problems. Suicide prevention centre SOS told Channel NewsAsia last week that it received about 1,900 calls from those aged five to 19 last year – an increase of 70 per cent compared to 2012. 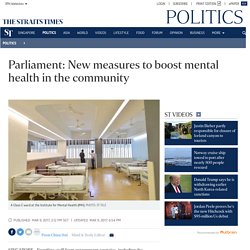 Social service and community agencies will also receive basic training to identify and respond to people with mental health issues, and refer them to the Agency for Integrated Care for help. These are among the objectives to boost community mental health care that wereannounced in Parliament on Thursday (March 9) by Senior Minister of State for Health Amy Khor.