Psychological disorders may be more prevalent than you think. Do you know that Singapore has one of the highest rate of depression in Asia?

Singapore has one of the highest rate of depression in Asia? Common Disorders. 1 in 7 people in Singapore have experienced a mental disorder – and some millennials are more susceptible to mood and alcohol-related ones, Business Insider - Business Insider Singapore. OCD one of the most common mental disorders in Singapore. SINGAPORE: Obsessive compulsive disorder (OCD) is one of most common mental health conditions here, according to findings from a nationwide study released on Tuesday (Dec 11). The disorder affected one in 28 people in their lifetime, making it the third-most prevalent condition after major depressive disorder and alcohol abuse. The illness is commonly characterised by recurrent and persistent thoughts, impulses or images, and when severe, impedes a person's ability to function.

Younger people aged 18 to 34 were more likely to have the condition than those aged 50 and above, said researchers from the Institute of Mental Health (IMH) and Nanyang Technological University (NTU), citing the findings from the second Singapore Mental Health Study. The study also found that those who had a monthly household income of between S$2,000 and S$3,999 were less likely to have the condition than those with a household income of less than S$2,000. “It’s a very neglected disorder,” said Assoc Prof Mythily. Singapore's Depression Problem. More struggling with alcohol abuse, but seeking help earlier, Health News. A growing number of people here are struggling to cope with alcohol abuse, though more are seeking help for the condition earlier than was the case before, a nationwide mental health study has revealed. 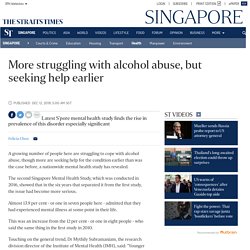 The second Singapore Mental Health Study, which was conducted in 2016, showed that in the six years that separated it from the first study, the issue had become more serious. Almost 13.9 per cent - or one in seven people here - admitted that they had experienced mental illness at some point in their life. This was an increase from the 12 per cent - or one in eight people - who said the same thing in the first study in 2010. Touching on the general trend, Dr Mythily Subramaniam, the research division director of the Institute of Mental Health (IMH), said: "Younger cohorts have a higher prevalence of mental illness, possibly because they are more aware of it and willing to talk about their symptoms. " 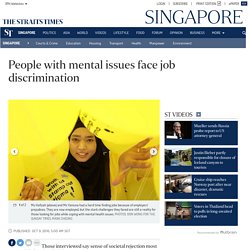 Then five years ago, Ms Hafizah Kamarulzaman was diagnosed with schizophrenia after giving birth to her son. While the single mother, now 23, managed to control her condition after seeking help, she struggled to get a job for almost four years, she told The Sunday Times. She described how she was turned down for positions in the food and beverage and healthcare sectors, on the sidelines of an event called "Walk with Us, Stamp out Stigma". Considerable stigma against mental illness: Study. SINGAPORE — An Institute of Mental Health (IMH) study has found a common perception here that those with mental illness can get better if they wanted to and that their condition is a sign of personal weakness. Researchers behind the study said this suggests “considerable” stigma towards individuals with mental illness. The stigma could hinder such individuals from seeking treatment out of fear of being associated with a disorder.

The mental health literacy study spanning one year started in March last year and involved about 3,000 adult residents aged between 18 and 65. It examined how well people could recognise five common mental disorders — alcohol abuse, dementia, Major Depressive Disorder (MDD), Obsessive Compulsive Disorder (OCD) and schizophrenia — and their beliefs towards these conditions. To measure stigma, researchers used scales to gauge people’s attitudes towards the individual suffering from a mental illness, as well as how willing they are to spend time with such persons. What are your thoughts on psychological disorders? What we can do to address stigma. The Movement’s desired outcomes for employers are: Provide a safe and supportive environment for disclosure Adopt more inclusive hiring practices and put in place workplace accommodations Equip colleagues with confidence and knowledge to support persons with mental health conditions In May 2018, a WorkWell Leaders Workgroup comprising private and public sector leaders was formed to champion workplace wellbeing as a leadership priority.

As its first collective action, the workgroup rallied employers to support the Beyond the Label campaign in the workplace on 10 October 2018, World Mental Health Day. These employers also pledged their commitment to the cause beyond the day. Click here for the list of employers who have pledged. If you would like to find out more or be part of this movement, please contact the Mental Health Services team at ncss_mental_health@ncss.gov.sg. 6 common mental disorders affecting Singaporeans today and where you can go to get help, Business Insider - Business Insider Singapore. Pexels. Depression Emergency Hotline and Other Health Helplines.

7 Avenues to Get Help In Singapore For Mental Health Issues.