Psychological disorders, or more commonly known as mental illness, comprises of many different types of problems and symptoms. It affects the individual's thoughts, emotions, behaviour and social relations.

Socio-demographic characteristics associated with prevalence of psychology disorders includes age, gender, ethnicity, marital status, education, employment and income status. Psychological Disorder in Singapore. SMHS 2016 Media Release FINAL web upload. OCD one of the most common mental disorders in Singapore. SINGAPORE: Obsessive compulsive disorder (OCD) is one of most common mental health conditions here, according to findings from a nationwide study released on Tuesday (Dec 11). The disorder affected one in 28 people in their lifetime, making it the third-most prevalent condition after major depressive disorder and alcohol abuse. The illness is commonly characterised by recurrent and persistent thoughts, impulses or images, and when severe, impedes a person's ability to function.

Younger people aged 18 to 34 were more likely to have the condition than those aged 50 and above, said researchers from the Institute of Mental Health (IMH) and Nanyang Technological University (NTU), citing the findings from the second Singapore Mental Health Study. The study also found that those who had a monthly household income of between S$2,000 and S$3,999 were less likely to have the condition than those with a household income of less than S$2,000. “It’s a very neglected disorder,” said Assoc Prof Mythily.

Busting the Myths of Mental Illness. Do you know anyone with mental illness? 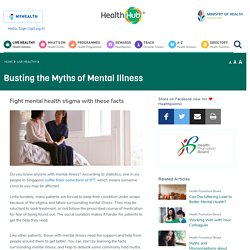 According to statistics, one in six people in Singapore suffer from some form of it[1], which means someone close to you may be affected. Unfortunately, many patients are forced to keep their condition under wraps because of the stigma and taboo surrounding mental illness. They may be reluctant to seek treatment, or not follow the prescribed course of medication for fear of being found out. The social isolation makes it harder for patients to get the help they need. Like other patients, those with mental illness need the support and help from people around them to get better.

Related: Debunking Common Health Myths Myth: Mental Illnesses Cannot be Cured Facts: While recovery from mental illness can be a long journey, it is possible for patients to manage their condition and eventually put it behind them. Why is mental health awareness so important? Facing Depression. More kids in Singapore seeking help for mental health issues.

SINGAPORE: Depression, relationship issues, bullying, family problems – kids as young as five years old are seeking help for these problems. Suicide prevention centre SOS told Channel NewsAsia last week that it received about 1,900 calls from those aged five to 19 last year – an increase of 70 per cent compared to 2012. Another helpline Tinkle Friend, which caters to primary school students, saw a 50 per cent increase in the number of calls and messages on its online chat service from 2012 to 2016. Some of the questions stemmed from boredom and loneliness - “What can I do when I’m bored?” Or “How do I make more friends?” But some children in more distressing situations asked questions like: “What will happen to me after my parents get a divorce?” He’s 48, and already grappling with dementia. SINGAPORE: He was once an accomplished teacher and published author of two chemistry books. But two years ago, when he was only 46, Mr George Chong was diagnosed with younger-onset Alzheimer’s, an uncommon form of dementia.

There was no cure, the doctor told him – and he slowly began to lose control of his daily life. Over time, he found it hard to follow instructions, do simple calculations and, sometimes, even distinguish his right hand from his left. “Because of Alzheimer’s, I was very agitated. It was so bad that I even scolded my wife: ‘Why didn’t you take care of me?’” When he could not even fill in a form and struggled to speak logically, his wife of 23 years Lynn Chong tried to dissuade him from resuming work at their tuition centre.

“He said, ‘If I’m back at work … I’ll be back to my old self,’” she recounted. There are an estimated 40,000 persons living with dementia in Singapore, and this number is expected to double by 2030. WATCH: What it's like (4:09) Social Stigma. Many still steer clear of people with mental illness: Poll, Singapore News. Even as more people are seeking outpatient treatment at the Institute of Mental Health (IMH), more than five in 10 respondents in a recent survey indicated they are unwilling to live with, live nearby or work with a person with a mental health condition. The survey, which is the first of its kind by the National Council of Social Service (NCSS), found that most people agree that more needs to be done to reduce societal stigma, yet they are also reluctant to accept them on an individual level.

‘Crazy, weird, scary’: Survey unveils negative labels youths associate with mental illness. SINGAPORE — Researchers have called for regular and compulsory education on mental health for youths, in the wake of a study that found a large proportion of this group having misconceptions of mental illness. Almost half (44.5 per cent) of 940 teenage students polled attached negative and pejorative labels to people with mental illness. “Crazy”, “weird”, “scary”, “stupid” and “dangerous” were among the words that came to mind then the respondents heard the term “mental illness”, reported the study, which was presented at the Frontiers in Mental Health symposium organised by the Institute of Mental Health (IMH) and Nanyang Technological University’s Lee Kong Chian School of Medicine on Tuesday (March 6).

Some 46.2 per cent of the respondents, who were aged between 14 and 18, also said they would be “very embarrassed” if they were diagnosed with a mental illness, while nearly a quarter (22.7 per cent) said they would not want others to know if their relative were mentally ill. A Social Experiment on Mental Health Stigma. Initiatives and Efforts. More seeking help amid push to raise mental health awareness, Singapore News. 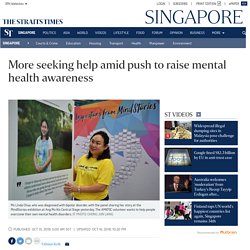 According to Dr Vincent Ng, chief executive officer of AMKFSC Community Services, there has been a 42 per cent increase in people seeking help from its mental health service MindCare over the past two years, either for themselves or their loved ones. He was speaking at yesterday's MindStories exhibition at Ang Mo Kio Central Stage, the first event in this year's Mental Health Awareness Singapore Learning Series initiative. Organised by AMKFSC, it features the personal experiences and anecdotes of 18 people tackling mental health conditions, such as those in recovery and caregivers. Guest of honour Koh Poh Koon, an MP for Ang Mo Kio GRC and Senior Minister of State for Trade and Industry, said that from 2016 to June this year, AMKFSC Community Services provided intervention to almost 400 people with mental health conditions in Ang Mo Kio GRC.

Correction note: This report has been edited for clarity. NCSS - About the Campaign. About Beyond the Label Beyond the Label is a movement to address stigma faced by persons with mental health conditions in society. Singapore Mental Health Conference 2019. Where to seek help. Institute of Mental Health. Who's CHAT - CHAT - Community Health Assessment Team.

Our full name is "Community Health Assessment Team", and we've been helping and supporting young people with mental health concerns since 2009. 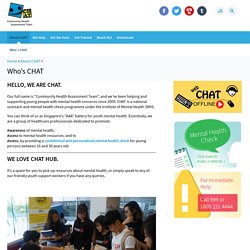 Related:  An Introduction to Psychology: Psychological Disorders   -  What are psychological disorders? How do Singaporeans view it? Where to seek help?   -  OCD one of the most common mental disorders in Singapore   -  Busting the Myths of Mental Illness   -  Facing Depression   -  More kids in Singapore seeking help for mental health issues   -  Many still steer clear of people with mental illness: Poll, Singapore News   -  ‘Crazy, weird, scary’: Survey unveils negative labels youths associate with mental illness   -  A Social Experiment on Mental Health Stigma   -  NCSS - About the Campaign   -  Institute of Mental Health   -  Samaritans of Singapore (SOS)   -  Education   -  Enterprise