What Psychological Disorders are to Singaporeans today.

Psychological disorders are an ongoing dysfunctional pattern of thought, emotions and behaviors. It causes disturbance to the mind and affects our daily lives.

Psychological disorders are out of anyone's control, in which comes from the influences of both biological (nature) and environment (nurture) factors. Singapore Association for Mental Health : Mental Wellness for All. A mental illness is a disturbance of the mind that impairs the way we think, feel and behave. It affects our daily activities, as well as impact the lives of family members and friends. Mood and anxiety disorders are the most common mental illnesses. About one in seven Singaporeans have experienced a mood or anxiety disorder at some point of their lives[1]. Diagnosis is made through clinical tests and observations. Despite their prevalence, persons with mental illness still face considerable stigma and discrimination. Let us look at some common misconceptions associated with mental illness.

Take the first step by acknowledging that you may have a mental health condition. Consult a doctor or mental health professionalTalk to family members and friendsFind support in online forumsJoin a peer support groupCall SAMH Counselling Hotline at 1800 283 7019 (toll-free) You are aware that someone close to you may be suffering from a mental illness. Recovery is unique to each individual. Psychological Disorders: Crash Course Psychology #28. The invisible illness of “high-functioning” depression. Singapore's Depression Problem. Gotta Get It Right - Struggle with Obsessive Compulsive Disorder.

Embracing Being Bipolar. Worried Sick - All About Generalised Anxiety Disorder. More people in Singapore struggling with alcohol abuse, but seeking help earlier: Study, Health News. SINGAPORE - A mental health study has shown that while alcohol abuse is a growing problem here, sufferers have been seeking help earlier. The second Singapore Mental Health Study, conducted in 2016, found that one in 24 people struggled with the problem in their lifetime, or 4.1 per cent of the population.

This is up from one in 32 people in the landmark study done in 2010. Symptoms include recurrent alcohol use that affects obligations at work, school, or home. But sufferers also sought treatment earlier – the median number of years they delayed treatment in 2016 was four years, down from 13 years in 2010. The results released on Tuesday (Dec 11) also showed that a smaller proportion, or 0.5 per cent of the population, suffered from alcohol dependence. This refers to a condition where a person is hit with withdrawal symptoms when intake is stopped, among other things. It involved face-to-face interviews with more than 6,000 Singaporeans and permanent residents aged 18 and above. NCSS Attitudes towards persons with mental health conditions in singapore 2017 study. Mentalcare. A Social Experiment on Mental Health Stigma. Speak Up. Silver Ribbon (Singapore) - Advocacy - 1st Global Summit for Mental Health Advocates. 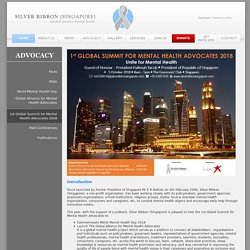 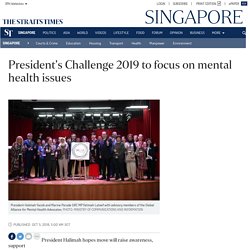 The President's Challenge 2019 will be launched early next year. "I hope that by placing more emphasis on people with mental health issues, we can raise greater awareness of their needs and we can better support them in their journey of recovery and reintegration," said Madam Halimah in her opening address at the first Global Summit for Mental Health Advocates held at The Grassroots Club in Ang Mo Kio. She also encouraged voluntary welfare organisations supporting people with mental health conditions to apply for next year's edition of the Empowering For Life Fund, which helps enable employment for vulnerable groups. The application form for the fund can be downloaded online at pc.org.sg.

Fast Facts on Mental Health in Singapore. 51% of mental illness patients suffer from a chronic physical illness, because there is a link between the twoDepression, alcohol abuse and obsessive compulsive disorder are the top 3 most common disorders in Singapore29 The age at which the majority of mental illnesses occur5.8% of the adult population in Singapore has suffered from depression at some point in their lives Symptoms of top 3 disorders Depression: loses interest in daily life, has feelings of hopelessness and thoughts of suicide Alcohol Abuse: has to drink more and more alcohol to feel its effects as tolerance for the substance increases, experiences sweating and other withdrawal symptoms when not drinking Obsessive Compulsive Disorder Obsessive: has persistent and irrational thoughts, impulses or images that cause anxiety or distress like an overwhelming fear of germs and dirt Compulsive: repeats actions like checking and rechecking locks several times over Treatment Stay Positive Start smiling to lift your mood Ref.