What some Singaporeans are doing to banish loneliness - SingHealth 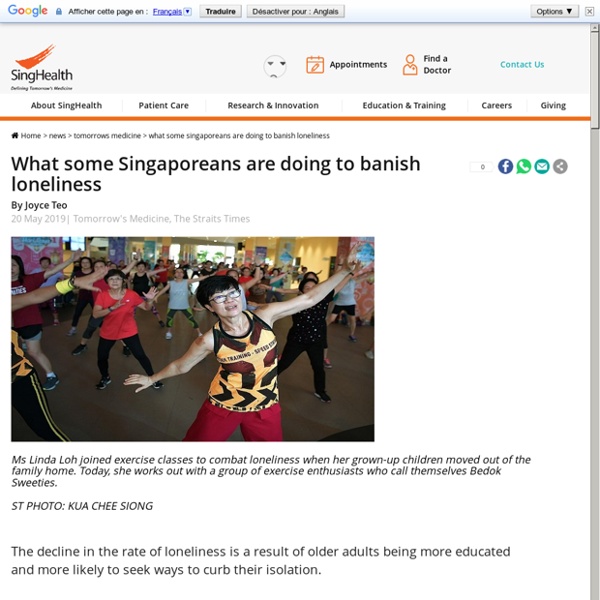 ​Ms Linda Loh joined exercise classes to combat loneliness when her grown-up children moved out of the family home. Today, she works out with a group of exercise enthusiasts who call themselves Bedok Sweeties. The decline in the rate of loneliness is a result of older adults being more educated and more likely to seek ways to curb their isolation. Housewife Linda Loh felt lonely when first her mum and then her dad died more than a decade ago. Ms Loh, 60, used to spend her free time with her parents as her husband was based overseas for work as a regional accountant. Then her 32-year-old daughter married in 2012 and moved out. "The first few months after they moved out, the house felt so empty," she said. "I stayed home alone and just did housework or I would go to the market to walk around. She realised then that she wanted to do something about her loneliness. Today, she attends workout sessions in the community with a group of exercise enthusiasts who call themselves Bedok Sweeties.

Related:  Stress Faced by Elderly in Singapore • Stress in Family Caregivers of the Elderly • Effects of social isolation for seniors • The Effects of Social Isolation on Elderly’s Development • Impact on Social Development

Singapore's Elderly Are Lonelier Than Ever, and More are Turning to Suicide - RICE Photo credit: Gramicidin on Flickr Growing old in Singapore is increasingly becoming a challenge, as the number of elderly suicides hit a record-high of 129 last year. Figures released by the suicide prevention agency Samaritans of Singapore (SOS) showed that even though the number of reported suicides is at its lowest since 2012, the number of people aged 60 and above who took their own lives is still on the rise. Last year, this figure increased by 23 per cent since 2011. Does caregiving cause psychological stress? Study says, it depends For UW employees | Health and medicine | News releases | Research | Science February 4, 2014 The strain of caring for the elderly or the sick may partly stem from family history and upbringing.ThinkStock When it comes to life’s stressors, most people would put caregiving at the top of the list. But according to Peter Vitaliano, a professor of psychiatry and psychology at the University of Washington, there never have been data actually showing caregiving causes psychological distress.

Still lost: Seniors shunning technology SINGAPORE — Despite spending all her life in Singapore, Madam Yang, 59, often feels “lost” in a wired-up society seemingly fuelled by technology on steroids. She struggles to understand terms such as “blogging” and “browsers”, and has not heard of Instagram or Twitter. She has a Facebook account because “everyone was on it” and she wanted to see what the fuss was about. However, she hardly logs on, and she is clueless about how to change her profile picture. From time to time, she enjoys reading the discussions on websites which she chances across- for example, on the City Harvest Church court case - but she frets over how to post comments and join in the conversations. The tuition teacher is bemused about why youngsters want to be “always on the go”, and need instant gratification.

Coronavirus: Elderly hit hard by social isolation amid circuit breaker measures, Health News A needle and the television set - these two objects have been keeping 83-year-old Nellie Woo company from morning to night for the past week while she is holed up alone at home. She used to enjoy playing bingo and exercising with her elderly neighbours at the Senior Activity Centre (SAC) downstairs, as well as chatting with volunteers who visited her studio flat. Now that all activities for seniors - including home visits - have ceased due to strict circuit breaker measures, Madam Woo is feeling lonely and emotionally down. She thinks about suicide sometimes, and has spent so much time staring at her patchwork and TV lately that her doctor had to give her antibiotics for dry eyes. For such elderly people, the ills that come with social isolation pose a significant health risk, say some seniors and social workers.

Seniors who live alone risk social isolation, Singapore News On the surface, retired carpenter Tan Keow Eng's daily routine is one to be envied. The 85-year-old goes to bed past midnight and when he is up again at 11am, spends the day listening to music, watching television or reading the newspaper. But the Marine Parade resident has little contact with anyone and suffers an ailment common with the elderly living alone - social isolation. His weakened legs mean anything more than a five-minute walk to the nearby senior activity centre or coffeeshop is difficult. Such a lifestyle puts seniors who live alone like Mr Tan at risk of becoming socially and emotionally isolated, a study by Singapore Management University (SMU) researchers has found.

Caregiver Stress: Would You Like Some Angst With That Sandwich Generation? Source: Fortunately, I had the support and help of my wife and my brother, but many caregivers toil on their own, and I am not surprised when I read of a physically frail husband caring for a wife with dementia committing a murder suicide. Some time ago, a pediatrician friend of mine told me he received a call from the mother of an autistic child--in the midst of a huge tantrum--begging for a drug. The best he could offer, "Mix yourself a martini and call me in the morning."

At 70, he has 5 diplomas, 3 bachelor's, 1 master's, Latest Singapore News This article is more than 12 months old He may be 70 years old, but his thirst for knowledge is unquenchable. Yesterday, adjunct lecturer Johnnie Chia Swee Hock added a diploma in Digital Advertising Technology and Analytics from Temasek Polytechnic to his list of academic achievements. He became the oldest-ever student to graduate from the poly, says Temasek Polytechnic.

Related:
Related:  Stress Faced by Elderly in Singapore   -  Stress in Family Caregivers of the Elderly   -  Effects of social isolation for seniors   -  The Effects of Social Isolation on Elderly’s Development   -  Impact on Social Development