Stress in Family Caregivers of the Elderly

Stress is commonly grouped into two components; the psychological perception of stressors and an individual's resultant mental state, and the body's physical response to these stressors.

In Singapore as of 2019, individuals over the age of 65 make up 14.4% of our population (SingStat, 2019), and our population pyramid graph is a textbook example of an ageing (soon to be aged) population. Individuals in the 40-60 years age range are the people who generally have to take on roles as primary caregivers of their elderly family members.

Having interacted with primary caregivers of the elderly, I have met individuals who are undergoing an immense amount of stress which affects them profoundly in emotional and psychological ways. This in turn, adversely affects their health, quality of life and interactions with people around them.

Caregiver stress syndrome (Ingber, 2018) is a condition that results in an individuals's mental, emotional and physical exhaustion. Often due to an individual's overarching sense of responsibility for their care recipient, they begin neglecting their own health and basic needs.

And ironically, the drive to care for someone else becomes imbalanced and these caregivers eventually succumb and require care themselves. Statistics Singapore - Population Dashboard. TODAYonline. SINGAPORE – The Republic’s population size is expected to reach 6.34 million in 2030, based on projections from the United Nations (UN) released this year. 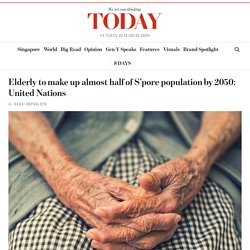 By then, there will be 806,000 people under 15 years old, and 1.8 million people who are aged 65 years or older - making up about 28 per cent of the total population. The numbers will reach 722,000 and 3.08 million, respectively, out of a total population of 6.58 million by 2050. This means that in about three decades, almost half (47 per cent) of Singapore’s total population will be at least 65 years old. Singapore's Elderly Poor.

Five Signs of Senior Stress. Stress is a common factor in life. 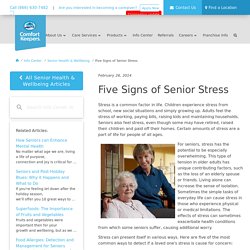 Common Causes of Caregiver Stress. If you’ve been taking care of a chronically ill spouse or elderly parent, you may be feeling the effects of caregiver stress. 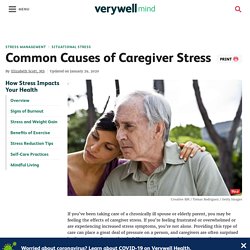 If you’re feeling frustrated or overwhelmed or are experiencing increased stress symptoms, you’re not alone. Providing this type of care can place a great deal of pressure on a person, and caregivers are often surprised by the amount of stress they feel. Here are just some of the pressures that many caregivers face. Fear or Uncertainty If you’re in the position of caring for someone with cancer or another serious disease, you’re probably also dealing with concerns for your loved one’s future.

Shift in Roles. Singapore&#39;s Elderly Poor. 'A socially isolated group’: Millennial caregivers are increasing, but they face unique challenges. Caregiver Stress Syndrome - Caregiver.com. Caregiver Stress: Would You Like Some Angst With That Sandwich Generation? Source: Fortunately, I had the support and help of my wife and my brother, but many caregivers toil on their own, and I am not surprised when I read of a physically frail husband caring for a wife with dementia committing a murder suicide. 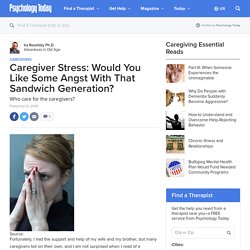 Some time ago, a pediatrician friend of mine told me he received a call from the mother of an autistic child--in the midst of a huge tantrum--begging for a drug. The best he could offer, "Mix yourself a martini and call me in the morning. " article continues after advertisement For several years I was on the board of an agency that cared for clients with extremely profound disabilities. The Differences Between Male and Female Caregivers.

We typically think of caregivers as women, and while statistically, it is accurate that more women than men provide care for older family members, men do their fair share. 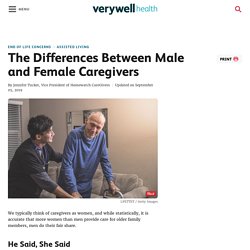 He Said, She Said One reason male caregivers might fly under the radar is that they tend to approach caring for a loved one differently than a woman might. Here are a few of the key differences between male family caregivers and female family caregivers, based on research by the Family Care Alliance, Statistics Canada, and the book Men As Caregivers by Betty J.

Kramer and Edward Thompson, Jr. As a whole, men have shown a preference to manage care rather than administer care. A candle burning at both ends: Spotting the signs of caregiver burnout. SINGAPORE: Like any other parent, Mr Peter Tay wanted his three daughters to do well. 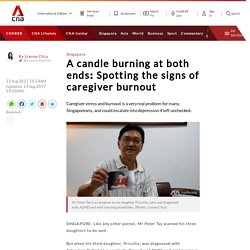 But when his third daughter, Priscilla, was diagnosed with Attention Deficit Hyperactivity Disorder (ADHD) and mild learning disabilities just before she began primary school, Mr Tay struggled to accept the situation. “Parents basically want their kids to be high-flyers,” he said. “And my two older daughters had done fairly well academically.” “It was very difficult for us to look at the problem eyeball to eyeball.

Singapore&#39;s Elderly Poor. Does caregiving cause psychological stress? Study says, it depends. For UW employees | Health and medicine | News releases | Research | Science February 4, 2014 The strain of caring for the elderly or the sick may partly stem from family history and upbringing.ThinkStock When it comes to life’s stressors, most people would put caregiving at the top of the list. 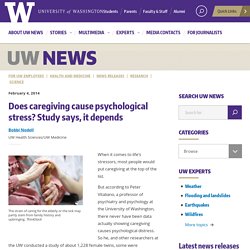 TODAYonline. The efforts and struggles of caregivers often go unnoticed, unappreciated and unrewarded. 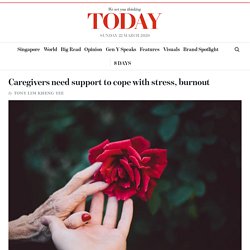 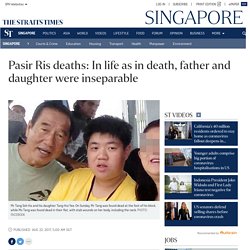 For years, neighbours saw Mr Tang Soh Ha and his daughter Tang Hui Yee walking together in the Pasir Ris neighbourhood where they lived. Some caregivers hurt charges out of stress, Latest Singapore News. He had thoughts of killing his mother and then ending his life. 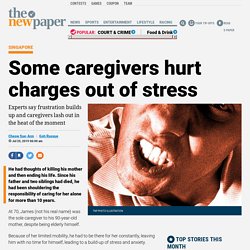 Since his father and two siblings had died, he had been shouldering the responsibility of caring for her alone for more than 10 years. At 70, James (not his real name) was the sole caregiver to his 90-year-old mother, despite being elderly himself. Because of her limited mobility, he had to be there for her constantly, leaving him with no time for himself, leading to a build-up of stress and anxiety. Experts told The New Paper that caregivers are often the ones who abuse the elderly because they are overwhelmed. James was referred to Sage Counselling Centre and sought help from Ms Berlinda Tan, a counsellor there. She told TNP: "Many caregivers get frustrated and stressed-out. "In Asian culture, we are encouraged to practise values such as filial piety. Ms Tan's client received counselling from her and his mother was provided with home-care services.

It used the example of a Mrs Tan, whose needs increased over time. Burden of caring for ageing parents weighs heaviest on unmarried daughters. SINGAPORE: Unmarried women with no children are more likely than married women to provide care for parents ageing at home. This was the key finding in AWARE’s latest year-long research project studying the impact of family caregiving on caregivers’ retirement adequacy in Singapore. This surprised us. Old and frail, and taking care of an elderly loved one, Singapore News. In Singapore, with its rapidly ageing population, many of those caring for elderly family members are themselves old and frail. According to a new study, nearly half of all caregivers are aged 55 and older. About two in three of these older caregivers have at least one chronic disease - like arthritis, diabetes or heart problems - and about one in three described his or her health as poor or fair.

Some 20.3 per cent of the older caregivers show clinically significant symptoms of depression, compared with 15.8 per cent of caregivers aged between 21 and 54. When carers are burnt out, who cares for them? SINGAPORE: When a loved one becomes a patient at home, it can take a toll on the family, especially the primary carer. Parliament: Raft of measures to help relieve burden of caregivers, Politics News. Caregiver Stress and Guilt. Caring for a loved one and feeling guilty about taking a vacation, going for a good massage or meeting friends for a meal? You’re not the only one. Caregivers often struggle with such feelings of guilt which can deplete energy and may lead to mental anguish. Some caregivers may not be prepared for the demands of caregiving as the role may have been thrust upon them unexpectedly. Facing Elderly Depression: Linda's Mother. Singapore’s elderly and their desperate battle with isolation, loneliness and depression – The Independent News.

- Advertisement - Singapore’s elderly citizens may no longer be worrying about raising families and career advancement, but they have difficult battles of their own. It is no secret that they are often beset with illness and pain; however, there is more to their plight than what meets the eye. Singapore's Elderly Are Lonelier Than Ever, and More are Turning to Suicide - RICE. Photo credit: Gramicidin on Flickr. Singapore’s Elderly Loneliness Epidemic. By Kayla Toh Epoch Times Staff Mr Hoong Hing Weng’s soft eyes gazed at a group of young children playing in the distance.

“I love kids,” he said with a smile. Wearing a plain white T-shirt and brown shorts, Mr Hoong, 82, has been living in Chinatown most of his life – alone. He has no children. What some Singaporeans are doing to banish loneliness - SingHealth. ​Ms Linda Loh joined exercise classes to combat loneliness when her grown-up children moved out of the family home. ‘We don’t have a plan’: Coronavirus adds pressure to caregivers sandwiched between seniors and kids.

Coronavirus and COVID-19: Caregiving for the Elderly. Reviewed By: When it comes to COVID-19, the disease caused by the new coronavirus, older people are especially vulnerable to severe illness. Research is showing that adults 60 and older, especially those with preexisting medical conditions, especially heart disease, lung disease, diabetes or cancer are more likely to have severe — even deadly — coronavirus infection than other age groups. If you’re caring for an older loved one, you might be worried. Alicia Arbaje, M.D., M.P.H., Ph.D. specializes in internal medicine and geriatrics at Johns Hopkins.

She shares what you need to know to keep elderly people safer, and what to do if they do become infected with COVID-19. Keep yourself well First and most important, as a caretaker you should take all the precautions you can to avoid becoming infected yourself. Coronavirus: Complete list of activities for seniors that are suspended for two weeks, Health News. SINGAPORE - The Ministry of Health has announced that several services and activities for seniors will be suspended for two weeks, starting on Wednesday (March 11), as it enhanced measures to reduce the risk of Covid-19 transmission among seniors. Home Caregivers Looking After The Elderly Are Vulnerable To Coronavirus. Health care has become a high-risk job in the wake of the coronavirus.

The effects of caregiver emotional stress on the depressive symptomatology of the care recipient. Caregiver Stress and Noncaregiver Stress. Mehta2005 Article StressAmongFamilyCaregiversOfO. TheEffectofPsychologicalStressandSocialIsolationonNeuroimmunoendocrine.

Taking Care of YOU: Self-Care for Family Caregivers. Tension Tamer. Burnout Guide. Caring for Caregivers: Support Groups in Singapore. Homage – Home Care, Therapy and Nursing Care By Locals, In Singapore. Building a Meaningful Relationship with your Loved One while Giving Care – Homage. The caregiver and care recipient relationship is intimate, and it often involves complex, confusing or emotionally challenging scenarios. One of the first steps toward quality communication and a safe, healing relationship is transparency and the ability to ask for help.

To build trust, the care recipient needs to be able to ask for help when it is required and, to provide quality care, the caregiver needs to be able to ask the care recipient for help in understanding something new or clarifying a preference or concern. Getting Respite. Respite care options come in the following forms; at a senior care centre and at a nursing home. Caregiving. Caregivers.org. Stress - Counselling Services by Singapore Counselling Centre. Support for Individuals and Caregivers. Need help as a caregiver? Here's where you can turn to.

Related:  Stress Faced by Elderly in Singapore   -  What is stress to elderly and how elderly can cope effectively with stress.   -  Stress among Undergraduates   -  Stress in the Elderly population   -  Stress among the Elderly   -  Psychological Disorder in Singapore   -  Caregiver Stress 101   -  Stress in Students   -  PSY108: Senior Stress   -  What is stress and how to manage it effectively   -  Facing Elderly Depression: Linda's Mother   -  What some Singaporeans are doing to banish loneliness - SingHealth   -  Stress - Counselling Services by Singapore Counselling Centre   -  Support for Individuals and Caregivers   -  Education   -  Enterprise