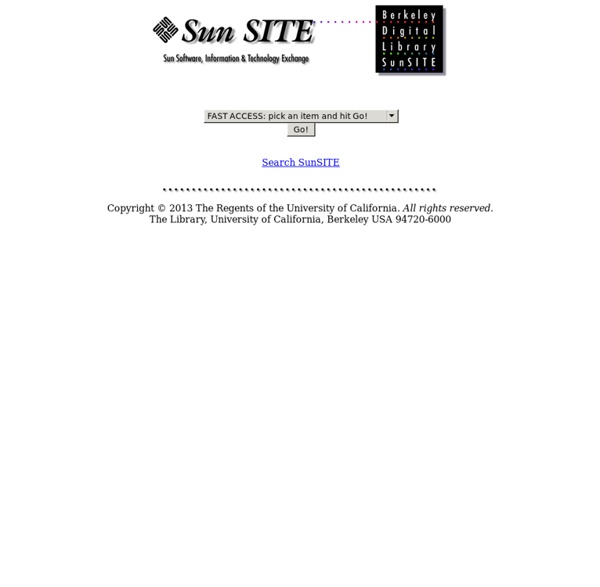 Eclipse and Java for Total Beginners This free video tutorial will help get you started writing Java programs using Eclipse version 3.3. No prior experience with Eclipse or Java is assumed. The 16 lessons total about 3 1/4 hours and are each between 9 and 14 minutes long. The lessons guide you through a step-by-step process creating a simple "personal lending library" application. logic and perception - topical index -The Skeptic's Dictionary - Skepdic.com Last updated 20-Nov-2015 Recommended Reading Critical Thinking Mini-Lessons Adams, James L. Conceptual Blockbusting: A Guide to Better Ideas 3rd ed. (Perseus Press, 1990).

University of Virginia Library The Electronic Text Center (1992-2007), known to many as “Etext,” served the University community’s teaching and research needs in the areas of humanities text encoding for over fifteen years. Many of the resources once available on Etext are now available via VIRGO, the primary access point for all U.Va. Library digital texts and images. In the course of migrating thousands of texts from Etext to VIRGO, it was determined that certain resources were not eligible for inclusion. Many of the texts that were not migrated can be found among other university online text collections, Google Books, and Project Gutenberg. We regret any inconvenience this may cause you and we wish you the best with your research.

Eclipse IDE Tutorial Copyright © 2007, 2008, 2009, 2010, 2011, 2012, 2013, 2014, 2015 vogella GmbH Eclipse Java IDE This tutorial describes the usage of Eclipse as a Java IDE. It describes the installation of Eclipse, the creation of Java programs and tips for using Eclipse. This tutorial is based on Eclipse 4.4 (Luna). Harvard’s Alternative to Google Books In 2004, Google decided to seek out millions of books gathering dust in library stacks, digitize them, and make them available to you at the click of a mouse. All you had to do was notice the advertisements in the margins. But after Google extended its archiving effort from books in the public domain to those under copyright, the U.S.

Java Tutorial Java is a high-level programming language originally developed by Sun Microsystems and released in 1995. Java runs on a variety of platforms, such as Windows, Mac OS, and the various versions of UNIX. This tutorial gives a complete understanding of Java. This reference will take you through simple and practical approach while learning Java Programming language. This reference has been prepared for the beginners to help them understand the basic to advanced concepts related to Java Programming language. Before you start doing practice with various types of examples given in this reference, I'm making an assumption that you are already aware about what is a computer program and what is a computer programming language? The Java™ Tutorials The Java Tutorials have been written for JDK 8. Examples and practices described in this page don't take advantage of improvements introduced in later releases and might use technology no longer available.See Java Language Changes for a summary of updated language features in Java SE 9 and subsequent releases.See JDK Release Notes for information about new features, enhancements, and removed or deprecated options for all JDK releases. The Java Tutorials are practical guides for programmers who want to use the Java programming language to create applications. They include hundreds of complete, working examples, and dozens of lessons. Groups of related lessons are organized into "trails".

online graphical dictionary and thesaurus Visuwords™ online graphical dictionary — Look up words to find their meanings and associations with other words and concepts. Produce diagrams reminiscent of a neural net. Learn how words associate. Enter words into the search box to look them up or double-click a node to expand the tree. Click and drag the background to pan around and use the mouse wheel to zoom. TEDxSF - A Curation Of People And Ideas... Posted by Tom Foremski - June 5, 2011 I've been to several TEDxSF events but the most recent one felt like a breakthrough event because of the mix of people and talks, plus the new venue. The event was sold out with about 650 tickets for the Yerba Buena location, a larger theater than the Academy of Sciences, where it used to be held. The mix of people was eclectic as always. There were at least two or three talks where I wished for the return of the old Vaudeville stage hook, or maybe a remote controlled trapdoor. Most of the rest of the talks were interesting, intriguing, and some were even brilliant.

Chaîne de mittechtv‬‏ MIT Engineering Systems Division Play * Transforming engineering education, research, and practice through the emerging field of engineering systems.* Preparing engineers to think systemically, lead strategically, and address the complex challenges of today's world, for the benefit of humankind MIT Engineering K-12 Video Pilot These videos were produced by MIT students to highlight the Institute and its students as super-qualified sources for hands-on projects, demonstrations, and laboratory experiments. The creativity and passion of MIT's students can be extremely effective in engaging young people around the globe with engineering and science.

Books Shorter than a novel, but longer than a magazine article -- a TED Book is a great way to feed your craving for ideas anytime. TED Books are short original electronic books produced by TED Conferences. Like the best TED Talks, they're personal and provocative, and designed to spread great ideas. TED Books are typically under 20,000 words — long enough to unleash a powerful narrative, but short enough to be read in a single sitting. Two ways to get TED Books Subscribe and save With the TED Books App, you can subscribe to TED Books and get immediate free access to every TED Books title!

100 Websites You Should Know and Use Entertainment Meet David Peterson, who developed Dothraki for Game of Thrones There are seven different words in Dothraki for striking another person with a sword. Among them: “hliziﬁkh,” a wild but powerful strike; “hrakkarikh,”a quick and accurate strike; and “gezrikh,” a fake-out or decoy strike.