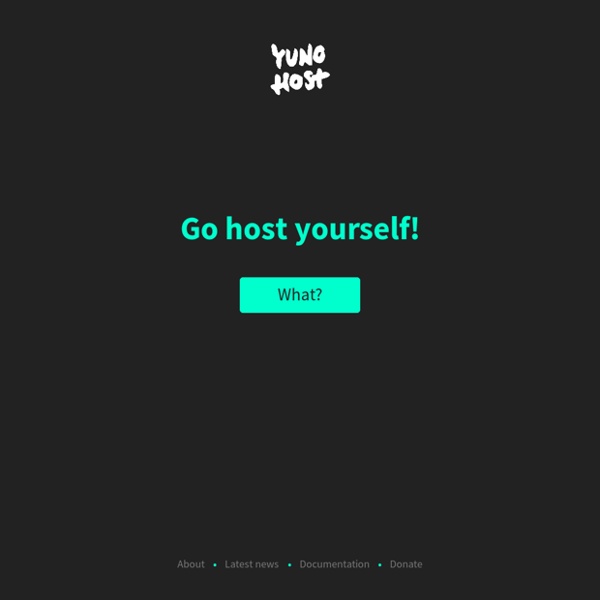 VeraCrypt - Home This site uses cookies for analytics, personalized content and ads. By continuing to browse this site, you agree to this use. Learn more CodePlex is in read-only mode in preparation for shutdown. See shutdown, migration, and archive plans CodePlexProject Hosting for Open Source Software - Flash OS images to SD cards & USB drives Ubuntu images (and potentially some other related GNU/Linux distributions) have a peculiar format that allows the image to boot without any further modification from both CDs and USB drives. A consequence of this enhancement is that some programs, like parted get confused about the drive's format and partition table, printing warnings such as: /dev/xxx contains GPT signatures, indicating that it has a GPT table. However, it does not have a valid fake msdos partition table, as it should. Perhaps it was corrupted -- possibly by a program that doesn't understand GPT partition tables.

SHR Project What is SHR ? SHR is a GNU/Linux based operating system for smartphones and similar mobile devices. It integrates various Free and Open Source Software projects into a versatile platform - flexible enough to run on a vast selection of mobile hardware such as the Openmoko Neo Freerunner, Goldelico OpenPhoenux (GTA04), Nokia N900 and more. The SHR build system is based on OpenEmbedded - well known from the Yocto project. For telephony, networking, etc. the freesmartphone.org framework is used.

La bibliothèque standard — Documentation Python 3.7.5 While The Python Language Reference describes the exact syntax and semantics of the Python language, this library reference manual describes the standard library that is distributed with Python. It also describes some of the optional components that are commonly included in Python distributions. Python’s standard library is very extensive, offering a wide range of facilities as indicated by the long table of contents listed below.

The Biggest Data Breaches of 2017 (So Far…) This week, Atlassian's Hipchat was hacked. This follows the trend of more and more high-profile hacks that are waking consumers up - like Sony, Yahoo, and the Target data breach that rocked the country when 40 million debit and credit card numbers stolen during the holiday shopping time that year. (See a very cool data visualization chart here of all the hacks from 2004 - present.) Now, it feels like data breaches are a fact of digital life. And while most companies have data breach preparedness on their radar, the threat landscape is ever-evolving.

Gemini (protocol) TCP/IP application layer protocol The Gemini protocol is an application layer protocol for distributed hypertext information systems that provides access to simple, primarily textual documents in Gemini space. This is done with contemporary technologies such as TLS, thereby improving privacy and user agency relative to the Web. Servers run by default on port 1965. GNU/Linux Timeline After a short essay on methodology we’re curious to find out whether there are any master-snoops among our audience. We present exhibit M, a rare specimen we know nothing about but for the fact that it was compiled from bits of Gentoo. Hence we call publicly for any hints or leads regarding this elusive distribution! IDLE — Documentation Python 3.7.5 IDLE is Python’s Integrated Development and Learning Environment. Editing and navigation Editor windows IDLE may open editor windows when it starts, depending on settings and how you start IDLE. Thereafter, use the File menu.

Laptop M.2 (NGFF) SSD Compatibility List M.2, also known as NGFF (Next Generation Form Factor) is the successor of the mSATA standard for expansion cards. M.2 is very flexible and is widely used as an option for additional storage on the today laptop’s motherboards. It can vary in its size – at this point, commercially available are 30mm, 42mm, 60mm, 80mm, and 110mm lengths, which are commonly expressed like ‘2230’ (22m wide, 30mm long), ‘2242’ (22m wide, 42mm long), etc. Joining Gemini Space and Reading Over Encrypted Connection Without Unnecessary Clutter Joining Gemini Space and Reading Over Encrypted Connection Without Unnecessary Clutter Summary: Gemini space (some spell it Geminispace) is expanding and software for browsing Gemini capsules (client/browser) has matured to the point where it’s very easy to join in, no matter what operating system one uses WITH over 100,000 page requests from 1,100 unique addresses ( in less than 4 weeks we’ve convinced ourselves that Gemini protocol isn’t a waste of time and isn’t a passing fad. It’s expanding. The Gemini space is still in a state of expansion. We see more articles about it, we see more articles in it, we see more people getting involved at various capacities (some compose pages, some code, some promote, and some contribute to the formulation of a future standard).

Heimdall What is Heimdall? Heimdall is a cross-platform open-source tool suite used to flash firmware (aka ROMs) onto Samsung mobile devices. How does it work? Heimdall connects to a mobile device over USB and interact with software running on device known as Loke. Loke and Heimdall communicate via the custom Samsung-developed protocol sometimes referred to as the 'Odin protocol'. Low-level USB in Heimdall is handled by the popular open-source USB library, libusbx.