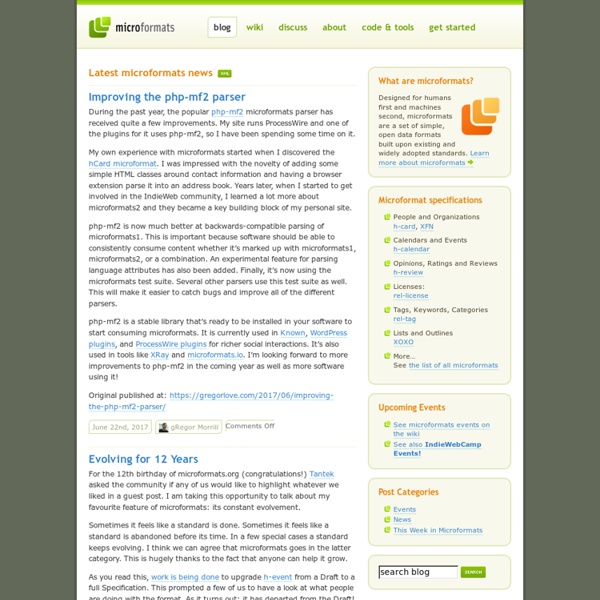 Last week the microformats.org community celebrated its 7th birthday at a gathering hosted by Mozilla in San Francisco and recognized accomplishments, challenges, and opportunities. Humans First: Admin Emeriti & New Admins The microformats tagline “humans first, machines second” forms the basis of many of our principles, and in that regard, we’d like to recognize a few people and thank them for their years of volunteer service as community admins: They’ve each been essential positive community contributors and guides over the years, and as admin emeriti are always welcome back should they decided to become admins again. We’re also pleased to announce two new community admins: Both have similarly been consistent positive contributors to microformats for years, and we’re very happy they’ve stepped up as community admins.

Comet (programming) Comet is a web application model in which a long-held HTTP request allows a web server to push data to a browser, without the browser explicitly requesting it.[1][2] Comet is an umbrella term, encompassing multiple techniques for achieving this interaction. All these methods rely on features included by default in browsers, such as JavaScript, rather than on non-default plugins. The Comet approach differs from the original model of the web, in which a browser requests a complete web page at a time.[3] The use of Comet techniques in web development predates the use of the word Comet as a neologism for the collective techniques. Comet is known by several other names, including Ajax Push,[4][5] Reverse Ajax,[6] Two-way-web,[7] HTTP Streaming,[7] and HTTP server push[8] among others.[9]

A Beginners Guide to HTML & CSS - Terminology, Syntax, & Introduction Before beginning our journey to learn HTML and CSS it is important to understand the differences between the two languages, their syntax, and some common terminology. As an overview, HTML is a hyper text markup language created to give content structure and meaning. CSS, also known as cascading style sheets, is a presentation language created to give content style and appearance. To put this into laymen terms, HTML determines the structure and meaning of content on a web page while CSS determines the style and appearance of this content. RDFa Distiller and Parser This distiller corresponds to the RDFa 1.0 specification. In 2012, W3C has published an updated version of that specification, called RDFa Core 1.1. A new distiller, processing RDFa 1.1 content, has been implemented which suprecedes this one.

HTML WebSockets WebSocket is a protocol providing full-duplex communications channels over a single TCP connection. The WebSocket protocol was standardized by the IETF as RFC 6455 in 2011, and the WebSocket API in Web IDL is being standardized by the W3C. Technical overview[edit] Browser implementation[edit] new pearl The Semantic Web is a web of data. There is lots of data we all use every day, and it is not part of the web. I can see my bank statements on the web, and my photographs, and I can see my appointments in a calendar. But can I see my photos in a calendar to see what I was doing when I took them? Can I see bank statement lines in a calendar? Why not?

XFN 1.1 profile HTML4 definition of the 'rel' attribute. Here are some additional values, each of which can be used or omitted in any combination (unless otherwise noted, and except where prohibited by law) and their meanings, symmetry Describe yourself in RDF Written by Leigh Dodds. Introduction FOAF-a-matic is a simple Javascript application that allows you to create a FOAF ("Friend-of-A-Friend") description of yourself. You can read more about FOAF in Edd Dumbill's "XML Watch: Finding friends with XML and RDF" article, at the FOAF homepage on RDFWeb, and also the FOAF vocabulary description.

Web Service Architecture A Web service is a method of communications between two electronic devices over a network. It is a software function provided at a network address over the web with the service always on as in the concept of utility computing. The W3C defines a Web service as: a software system designed to support interoperable machine-to-machine interaction over a network. It has an interface described in a machine-processable format (specifically WSDL). Other systems interact with the Web service in a manner prescribed by its description using SOAP messages, typically conveyed using HTTP with an XML serialization in conjunction with other Web-related standards.[1]

s Favorite Drupal 7 Contrib Modules We've been using Drupal 7 for all new sites for the past few months now, so we’ve put together a base site that we mirror to begin development on each new site. These are the contrib modules that we use on our base site. The modules in the Foundational and Everysite lists are always enabled by default. Flint SPARQL Editor Demo Welcome to Flint, our editor for SPARQL queries. Features Flint 1.0 is now available. This is our first production release. Constrained Application Protocol (CoAP) CoRE Working Group Z. Shelby Internet-Draft Sensinode Intended status: Standards Track K. Hartke Expires: December 30, 2013 C. Bormann Universitaet Bremen TZI June 28, 2013 Constrained Application Protocol (CoAP) draft-ietf-core-coap-18 Abstract The Constrained Application Protocol (CoAP) is a specialized web transfer protocol for use with constrained nodes and constrained (e.g., low-power, lossy) networks. The nodes often have 8-bit microcontrollers with small amounts of ROM and RAM, while constrained networks such as 6LoWPAN often have high packet error rates and a typical throughput of 10s of kbit/s.

REST Representational State Transfer (REST) is a software architecture style consisting of guidelines and best practices for creating scalable web services.[1][2] REST is a coordinated set of constraints applied to the design of components in a distributed hypermedia system that can lead to a more performant and maintainable architecture.[3] REST has gained widespread acceptance across the Web[citation needed] as a simpler alternative to SOAP and WSDL-based Web services. RESTful systems typically, but not always, communicate over the Hypertext Transfer Protocol with the same HTTP verbs (GET, POST, PUT, DELETE, etc.) used by web browsers to retrieve web pages and send data to remote servers.[3] The REST architectural style was developed by W3C Technical Architecture Group (TAG) in parallel with HTTP 1.1, based on the existing design of HTTP 1.0.[4] The World Wide Web represents the largest implementation of a system conforming to the REST architectural style. Architectural properties[edit]

Twinkle: A SPARQL Query Tool Twinkle is a simple GUI interface that wraps the ARQ SPARQL query engine. The tool should be useful both for people wanting to learn the SPARQL query language, as well as those doing Semantic Web development. Twinkle was originally inspired by Elliotte Harold's XQuisitor which provides a simple GUI interface for playing with XQuery. Features Load, edit and save SPARQL queries Insert PREFIX statements into queries Configure custom namespaces so they can be quickly inserted into queries Cancel long running queries Save results to file Query local files and remote RDF documents Query RDF data held in relational databases Query online SPARQL endpoints, such as DBpedia, reyvu.com and GovTrack.

6LowApp The 6LowApp activity of the IETF coordinates work in the IETF to specify application (as well as possibly transport, security and operations) protocols for constrained nodes and networks, the Wireless Embedded Internet. 6LowApp is not itself an IETF Working Group, but is intended to result in the creation of IETF Working Groups. In the 6LowApp activity, definition of work will be carried out as well as initial work leading up to specifications.