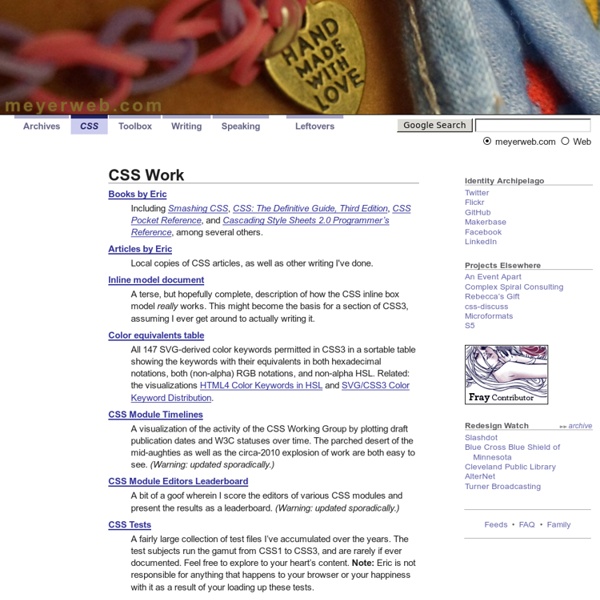 CSS Work Books by Eric Including Smashing CSS, CSS: The Definitive Guide, Third Edition, CSS Pocket Reference, and Cascading Style Sheets 2.0 Programmer’s Reference, among several others. Articles by Eric Local copies of CSS articles, as well as other writing I've done. Inline model document A terse, but hopefully complete, description of how the CSS inline box model really works. Color equivalents table All 147 SVG-derived color keywords permitted in CSS3 in a sortable table showing the keywords with their equivalents in both hexadecimal notations, both (non-alpha) RGB notations, and non-alpha HSL. CSS Module Timelines A visualization of the activity of the CSS Working Group by plotting draft publication dates and W3C statuses over time. CSS Module Editors Leaderboard A bit of a goof wherein I score the editors of various CSS modules and present the results as a leaderboard. CSS Tests A fairly large collection of test files I’ve accumulated over the years. W3C CSS2 Test Suite Prototyping Offsite

CSS tips and tricks, Part 1 As I stated in my recent article on CSS shorthand properties, I get a lot of questions about CSS from people who haven’t spent quite as much time working with CSS as I have. Their CSS is often not as efficient as it could be, and I come across some mistakes that are easy to make when you’re starting out with CSS. Since I’ve been using CSS extensively for a couple of years I’ve picked up some tricks that either make the CSS more efficient or solve a specific problem. I’d like to share my favourite CSS tricks and explain some of the most common beginner’s mistakes (of which I’ve made several).

Page Layout About the CSS Layout Generator The CSS Layout Generator was first released by Tony Aslett in October 2003, since then over 871,000 layouts have been generated. Updated in November 2010, HTML5 doctype can now be selected and a simple HTML5 template with appropriate tags will be created. Other HTML and XHTML doctypes are still available. The generator helps you create the structure of your website template using valid HTML and CSS. You can create a fluid or fixed width floated column layout, with up to 3 columns and with header and footer. unused CSS / FireFox / Firebug UPDATE 11.09.12 | A good number of searches regarding deleting extraneous CSS continue to lead readers to this blog post. During the time since I wrote this post, my coworker India Amos started to use BBEdit to quickly isolate used CSS in her ebooks (which therefore allows her to get rid of unused CSS) and has shared her workflow on her blog. I highly recommend checking out her instructions.

Selectivizr - CSS3 pseudo-class and attribute selectors for IE 6-8 CSS3 Create - Démos, tutoriels et expériences CSS : menus, galerie photos, interfaces web. The Top 15 Web APIs For Your Site : New Internet Media @ Pingable.org Machine-based interaction is a common feature of Web 2.0 sites like Digg, Facebook and Dilicious, and these days it goes well beyond simple web feeds. An application programming interface(API) is what allows programmers to write applications and widgets that interact with services on these sites. The API gives them web-based access to data and functions from such sites.

7 FBML examples to rock your Facebook fan page. - Webdistortion Facebook markup language or FBML for short is used in a variety of places within the social network. Anyone who has written any Facebook applications will already be pretty familiar with its tags, and will probably have used it to write data to walls, or share postings with others programmatically. If however you haven’t yet dipped your toe in the water of the Facebook API, or indeed haven’t actually needed to – there are some snippets of FBML which prove to be mighty useful when creating custom Facebook Fan Pages, and can easily and quickly out of the box be used with the FBML widget, which adds an extra much needed layer of customisation to an existing Facebook fan page. The static FBML widget can be added multiple times, and in multiple places (sidebar and tabs) to facilitate this. Once you’ve added it to your page, simply go to “edit page”, then under Applications click “edit” under Static FBML.

10 Mind-Blowing Experimental CSS3 Techniques and Demos As CSS3 gathers momentum, more and more new techniques and ideas are being published every other day. Each seems to explore exciting never seen before avenues, and ALL push CSSes boundaries ever further away. It really is an exciting time for web design. The post should have been called “The Top 10 Kick-Ass Experimental CSS3 Techniques That Simply Blew My Mind Away!

50 Awesome Free Fonts ShareShare There are a few ways to include fonts to your website using CSS. One of the easiest ways of doing this, is with Google fonts. Essential bookmarks for web designers and web developers The project 'Essential bookmarks for web-designers and web-developers', previously updated on this page, has a new url ( a new design, a new hierarchical structure and, of course, new web-dev-resources. The reason for changing the basic concept of this project was a huge number of suggestions and links, which have overflooded my mailbox recently. Over the last few days, a new project was created and updated. The old version (which also will be updated in future) is still available on the page "Bookmarks: Maxi edition".