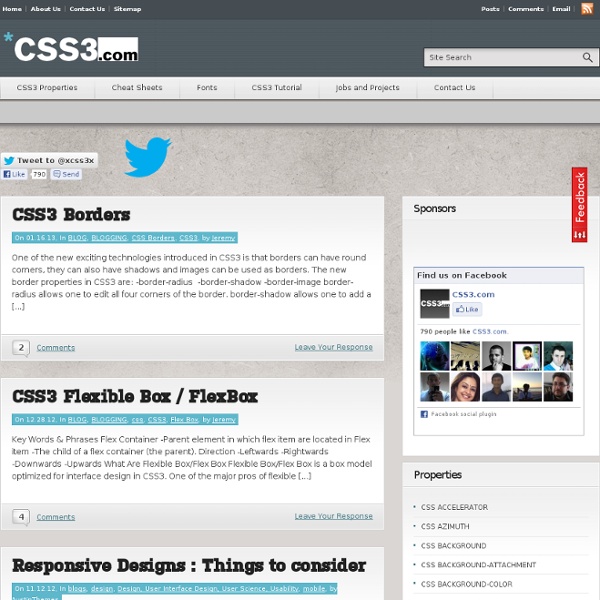 The No-Pressure Introduction to CSS3 | Onextrapixel - Web Design & Development Magazine It's difficult to escape the hype surrounding CSS3 at the moment, yet it has created a divide in the community. If you read any blog post on the subject and it is flooded with comments by developers who feel they still cannot use CSS3 in their work. Rather than being encouraging the responses from the experts in our community can appear as aggressive and superior. Although they are correct in saying CSS3 can be used now, the decision must still fall to the individual, even if their opinions are based on inaccurate assumptions. In this article I'll try to cover some of the more widely adopted CSS3 advancements, showing you not only how to use them but also the support you will likely expect from the major browsers. Why We Can Use CSS3 Now The arguments as to why we cannot use CSS3 include such things as the specification not being finalised or that some elements of CSS3 are either poorly supported or not supported at all. Vendor Prefixes Vendor prefixes that are in use today are : Examples

CSS For Bar Graphs Having a working knowledge of XHTML and CSS when developing applications is a big help in knowing what can be done client-side and what should be generated server-side. Recently we’ve had to tackle some interesting visualizations which we coded in XHTML and CSS. The method we used, while fairly simple, was a big help to the engineer and created a very flexible and inexpensive solution. We thought we would share our solution and code in case anyone else ran against similar situations. Update I posted a live example page with everything in tact. Basic CSS Bar Graph This is a simple bar graph we developed for a tool we’re releasing shortly for our client. Complex CSS Bar Graph This is a more complex visualization, yet still following the same basic idea. Vertical CSS Bar Graph In this third example, we utilize the same principle vertically and reproduce it multiple times to create a more complex graph. We hope you enjoyed our examples and find new uses and variations for the concept.

CSS3 . Info - All you ever needed to know about CSS3 Blog Tool and Publishing Platform 70 Must-Have CSS3 and HTML5 Tutorials and Resources CSS3 and HTML 5 are capable of revolutionizing the way we design websites. Both include so many new features and functions that it can be hard to wrap your head around them at times. The inclusion of native support for things like rounded corners and multi-column layouts are just the tip of the ice berg. Below are seventy resources, tutorials, and articles to get you started with CSS3 and HTML 5. Many of the techniques discussed are already supported to some extent in some some modern web browsers (Safari and Firefox have the most extensive support), so you can get started right away. CSS3 Tutorials and Resources Get Started with CSS 3 – A basic guide to using CSS3. Cascading Style Sheets Current Work – Details the progress the W3C is making on the CSS3 standard. Border-image: Using Images for Your Border – A guide to the new CSS3 function for adding image borders. Overview of CSS3 Structural Pseudo-Classes – A handy reference chart of structural pseudo-classes in CSS3. HTML 5 Resources

CSS Template Layout Module Abstract A grid with four slots defined by ‘display: "aaaaaaa" "bccccdd"’. CSS is a simple, declarative language for creating style sheets that specify the rendering of HTML and other structured documents. A layout grid or “template” defines one or more “slots” that an element's content can flow into. A ‘::slot’ selector allows elements to be styled differently based on which slot they appear in. Status of this document This section describes the status of this document at the time of its publication. Publication as a Working Draft does not imply endorsement by the W3C Membership. The (archived) public mailing list www-style@w3.org (see instructions) is preferred for discussion of this specification. This document was produced by the CSS Working Group (part of the Style Activity). This document was produced by a group operating under the 5 February 2004 W3C Patent Policy. The section on “CR exit criteria” lists some conditions for this specification to become a W3C Recommendation. 1. 2. resp

Fuel Your Creativity CSS3 Animations I recently wrote about CSS3 Transitions and the next step for that is sort of CSS Transitions on steroids: CSS3 Animations (CSS Animations Module Level 3 specification). What are CSS Animations? CSS Animations offers a more detailed way to control animations, the number of times it should iterate and property values at certain keyframes. A simple example Let’s take a look at the code for a simple CSS3 Animations example: 01..animation-container { 02. 03. 04. 05. 06. 09. 10. from { 11. width: 200px; 12. background: #f00; 13. opacity: 0.5; 14. 16. to { 17. width: 400px; 18. background: #ffffa2; 19. opacity: 1; 20. There are a number of new things we see above. The most interesting part here is the animation name, which is, contrary to what you might believe, any name of your choosing. In this example, the element will rotate to being straight, fade in and become twice as wide at the end of the animation. Using keyframe values and iteration-count 02. height: 60px; 03. padding: 10px; 05. 08. 10. width: 200px;

Fitted Doors NO Images Pre 2006 copyright © stu nicholls - CSS play Information Another one based on sliding doors this one uses NO images so it can be INFINITELY resized. It also allows the use of the whole tab for a hover effect. Works in IE5.01, IE5.5, IE6, Opera 7.5, Mozilla, Firefox and NN7.1. Update 1st June 2004 The third menu added, just for Ryan, to show how you could mix single and double line tabs. Update 10th April 2005 Probably easier to use the 'Snazzy Menu'. Update 21st August 2006 Rewritten to make this work in Opera v9.01 Copyright You may use this method on your personal 'non-profit' web site without seeking my permission. Commercial usage is also permitted without seeking approval, but I would ask that a donation is considered to support my work on CSSPlay. If you are having problems integrating any of my demonstrations into your website then I now offer a service to fault find and correct any errors that you may have introduced.

Transcending CSS: The Fine Art of Web Design > Discovery > Why do you need Transcendent CSS? - Pg. 5: Safari Books Online Why do you need Transcendent CSS? I’m a designer. I like to design stuff. Some days I wish I designed iconic stuff such as classic cars or maybe the Apple iPod—stuff that people love and that makes me piles of cash...enough cash to buy as many classic scooters and 1960s Minis as I can fit in my garage. But you see, for one, I don’t have a garage, and for another I enjoy what I design too much. I haven’t always enjoyed the Web so much.