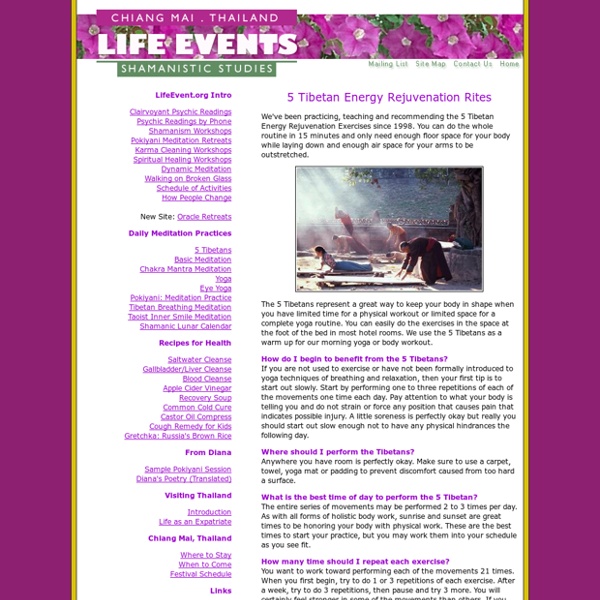 We've been practicing, teaching and recommending the 5 Tibetan Energy Rejuvenation Exercises since 1998. You can do the whole routine in 15 minutes and only need enough floor space for your body while laying down and enough air space for your arms to be outstretched. The 5 Tibetans represent a great way to keep your body in shape when you have limited time for a physical workout or limited space for a complete yoga routine. You can easily do the exercises in the space at the foot of the bed in most hotel rooms. We use the 5 Tibetans as a warm up for our morning yoga or body workout. How do I begin to benefit from the 5 Tibetans? Where should I perform the Tibetans? What is the best time of day to perform the 5 Tibetan? How many time should I repeat each exercise? What is the recommend breathing pattern? Tibetan Rejuvenation Exercise Movement #1 Breathing: breath in and out of your stomach. Tips and Recommendations: Work your way up to 21 spins. Tibetan Rejuvenation Exercise Movement #2

Breathing: Three Exercises "Practicing regular, mindful breathing can be calming and energizing and can even help with stress-related health problems ranging from panic attacks to digestive disorders." Andrew Weil, M.D. Since breathing is something we can control and regulate, it is a useful tool for achieving a relaxed and clear state of mind. I recommend three breathing exercises to help relax and reduce stress: The Stimulating Breath, The 4-7-8 Breathing Exercise (also called the Relaxing Breath), and Breath Counting.

Symbolic Imagery in Himalayan and Tibetan Sacred Art The arts of India, Tibet, Nepal, and Bhutan display a rich stylistic diversity. However, these Himalayan regions share many symbols and important figures in their arts. Dating from the first millennium, Himalayan art is part of the Buddhist tradition. It is beyond decorative or fine arts and thus is sacred art.

Print Version - Five Tibetan Rites By Mary Kurus Copyright Mary Kurus 2001, All Rights Reserved Background In 1985 a book called The Ancient Secret of the Fountain of Youth written by Peter Kelder was published which for the first time fully described an exercise program for "youthing". This is an exercise program used by Tibetan monks to live long, vibrant and healthy lives. Ngöndro Practices & Commentaries Deutsch Nederlands English Español Français Italiano Português བོད་ཡིག Translations Indian Masters Tibetan Masters Topics Tibetan Texts Home News Donations About Us Search Links If you find this site useful, please consider helping us to achieve our goal of translating more classic works from the Buddhist tradition and making them freely available. How to Heal and Strengthen Your Energy Body With Auric Breathing HJ: It is believed in many traditions that all imbalances in the physical body originate from imbalances in the auric field, aka the energy body. Either way, it is just as vital and important part of yourself as your physical body and requires care and healing as well. In this article, Yonti introduces us to the powerful Auric breathing meditation which will help you keep yours balanced, cleansed, healthy and whole. – Truth Auric Breathing: Body-Based Meditation By Yonti Kristan, M.A. | Mindful Muscle

Tibetan Arms and Armor Armor and weapons are certainly not among the images usually called to mind when considering the art or culture of Tibet, which is closely identified with the pacifism and deep spirituality of the Dalai Lama and with the compassionate nature of Tibetan Buddhism . However, this seeming paradox resolves itself when seen in the context of Tibetan history, which includes regular and extended periods of intense military activity from the seventh to the mid-twentieth century. Many excellent examples of Tibetan arms and armor can be found in museum collections today largely due to the fact that various types of armor and weapons continued to be used in Tibet into the early twentieth century, long after they had gone out of use in the West. Other types were preserved for ceremonial occasions, the most important of which was the Great Prayer Festival, a month-long event held annually in the Tibetan capital of Lhasa.

Confessions 2012 Las Vegas, NV Interactive gallery installation in The Cosmopolitan that invites people to anonymously share their confessions and see the confessions of the people around them in the heart of the Las Vegas strip. Amidst casinos, restaurants and bars, Chang invited passersby to write confessions on wooden plaques in the privacy of confession booths. DVD, Otherworld: Places of Initiation and Living Resurrection by Freddy SIlva What if... the concept of resurrection handed down to us is false? that it was once a level of initiation performed in secret Mysteries schools around the world, thousands of years before Christ? that a suppressed gospel describes it as something to be experienced by the living, not the dead?

The Effect of External Energies in Your Space By Caroline Diana Bobart From an intuitive standpoint, your aura or personal space is separated from the outer world by a permeable membrane of external energies. This turns you into a multi-dimensional, etheric telephone exchange of sorts! The Tibetan Book of Proportions In this section of the site we bring you curated collections of images, books, audio and film, shining a light on curiosities and wonders from a wide range of online archives. With a leaning toward the surprising, the strange, and the beautiful, we hope to provide an ever-growing cabinet of curiosities for the digital age, a kind of hyperlinked Wunderkammer – an archive of materials which truly celebrates the breadth and variety of our shared cultural commons and the minds that have made it. Some of our most popular posts include visions of the future from late 19th century France, a dictionary of Victorian slang and a film showing the very talented “hand-farting” farmer of Michigan.

Einstein’s Secret to Amazing Problem Solving (and 10 Specific Ways You Can Use It) Einstein is quoted as having said that if he had one hour to save the world he would spend fifty-five minutes defining the problem and only five minutes finding the solution. This quote does illustrate an important point: before jumping right into solving a problem, we should step back and invest time and effort to improve our understanding of it. Here are 10 strategies you can use to see problems from many different perspectives and master what is the most important step in problem solving: clearly defining the problem in the first place! The Problem Is To Know What the Problem Is