The Treasury of Lives: Biographies of Himalayan Religious Masters. Vajracakra. The Life of the Repa Tsultrim Tharchin. Looking for Ancient Tibet: Dharma Documentaries. Posted by Anandajoti on Friday, 27th June, 2014 This is a documentary tracing what looks like a pilgrimage through modern Tibet visiting some of the most holy places and holy people associated with the region. 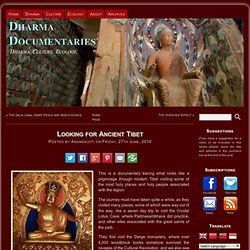 The journey must have taken quite a while, as they visited many places, some of which were way out of the way, like a seven day trip to visit the Crystal Lotus Cave, where Padmasambhava did practice, and other sites associated with the great saints of the past. Sangye Khandro: Books. Sangye Khandro (Translator of Generating the Deity) Sangye Khandro: Books: Shambhala Publications. In 1971 Sangye Khandro, intent upon meeting H.H. the Dalai Lama, traveled overland for five months, finally arriving in Dharamsala, India. 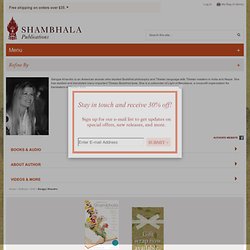 At this same time the Library of Tibetan Works and Archives in Dharamsala began to open its doors to Western students. Completing six months of study at the library, and recognizing her deep commitment to the Buddhist teachings, Sangye took the vows and lay precepts signifying the formal entrance to the Buddhist path. Throughout the next seven years, Sangye traveled to India and Nepal annually to continue her studies of the Buddhist teachings and Tibetan language. "After many years of preparing the field, it is now time to cultivate the depth and breadth of Tibetan Buddhist studies…We have established Light of Berotsana so that we may help with the task of translation from Tibetan into English while highly accomplished Tibetan lamas remain alive and available to teach in the West.” Heart of the Yogi excerpt. Milarepa caves part1 (eng)