Dalai Lama at a Santa Fe ski resort: Tells waitress the meaning of life. Photo courtesy Bob Shaw In the mid ’80s, I was living in Santa Fe, N.M., making a shabby living writing magazine articles, when a peculiar assignment came my way. 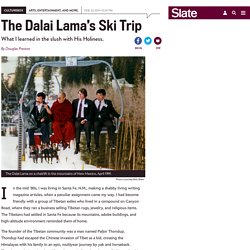 I had become friendly with a group of Tibetan exiles who lived in a compound on Canyon Road, where they ran a business selling Tibetan rugs, jewelry, and religious items. The Tibetans had settled in Santa Fe because its mountains, adobe buildings, and high-altitude environment reminded them of home. The founder of the Tibetan community was a man named Paljor Thondup. Thondup had escaped the Chinese invasion of Tibet as a kid, crossing the Himalayas with his family in an epic, multiyear journey by yak and horseback.

The Dalai Lama received the Nobel Peace Prize in 1989. Rutherford began making phone calls. Among the many phone calls Rutherford made, one was to me. I desperately needed the money, and so I agreed. The Dalai Lama arrived in Santa Fe on April 1, 1991. After lunch, the press corps dispersed. “Can we go up mountain?” Sky Dancer. Reached to : 3059 Citizens Shared: 12 Favorited: Tweets: Express below for the consciousness effected by this story/film... 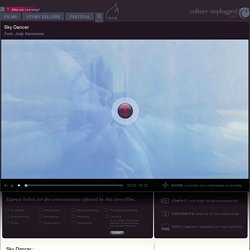 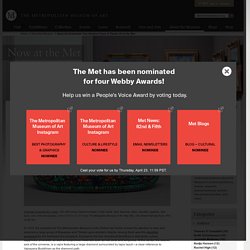 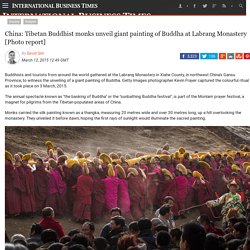 Getty Images photographer Kevin Frayer captured the colourful ritual as it took place on 3 March, 2015. The Tibetan Book of Proportions. In this section of the site we bring you curated collections of images, books, audio and film, shining a light on curiosities and wonders from a wide range of online archives. 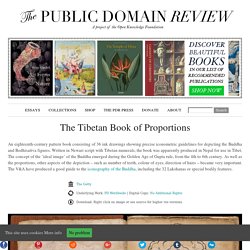 With a leaning toward the surprising, the strange, and the beautiful, we hope to provide an ever-growing cabinet of curiosities for the digital age, a kind of hyperlinked Wunderkammer – an archive of materials which truly celebrates the breadth and variety of our shared cultural commons and the minds that have made it. Some of our most popular posts include visions of the future from late 19th century France, a dictionary of Victorian slang and a film showing the very talented “hand-farting” farmer of Michigan. With each post including links back to the original source we encourage you to explore these wonderful online sources for yourself. Check out our Sources page to see where we find the content.

Library of Tibetan Works and Archives. LTWA Roof Top Renovation Massive renovation work in progress to optimize the existing workspace on the second floor of the main building. www.scienceintibetan.org A Science Education website in Tibetan Language. 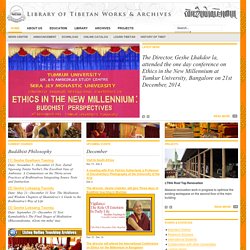 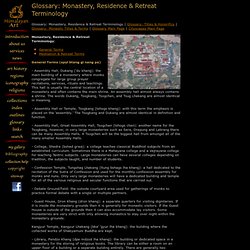 . - Assembly Hall or Temple, Tsogkang (tshogs khang): with this term the emphasis is placed on the 'assembly.' - Assembly Hall, Great Assembly Hall, Tsogchen (tshogs chen): another name for the Tsogkang, however, in very large monasteries such as Sera, Drepung and Labrang there can be many Assembly Halls. . - College, Shedra (bshad grwa): a college teaches classical Buddhist subjects from an established curriculum. . - Guest House, Dron Khang (dron khang): a separate quarters for visiting dignitaries. Dharma Publishing. In Scarred Chinese Tibetan City, Devotion to Sanctity of Life.

Photo YUSHU, China — With a set of chopsticks in her hands and a Tibetan prayer spilling from her lips, Gelazomo, a 32-year-old yak herder, hunched over the rocky banks of the river that cuts through this city and hunted for the quarry that she hoped would bring salvation. 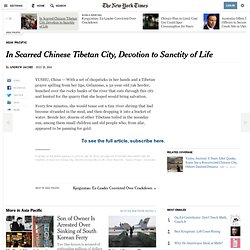 Every few minutes, she would tease out a tiny river shrimp that had become stranded in the mud, and then dropping it into a bucket of water. Beside her, dozens of other Tibetans toiled in the noonday sun, among them small children and old people who, from afar, appeared to be panning for gold. “Buddha has taught us that treating others with love and compassion is the right thing to do, no matter how tiny that life is,” she explained, as the newly revived crustaceans darted through the water of her bucket. Buddhists are encouraged to demonstrate a reverence for all sentient beings; some believers spurn meat while others buy animals destined for slaughter and then set them free. Continue reading the main story Video Mr. Norlha - Yak textures from the tibetan plateau.