The Official site of the Rolling Stones 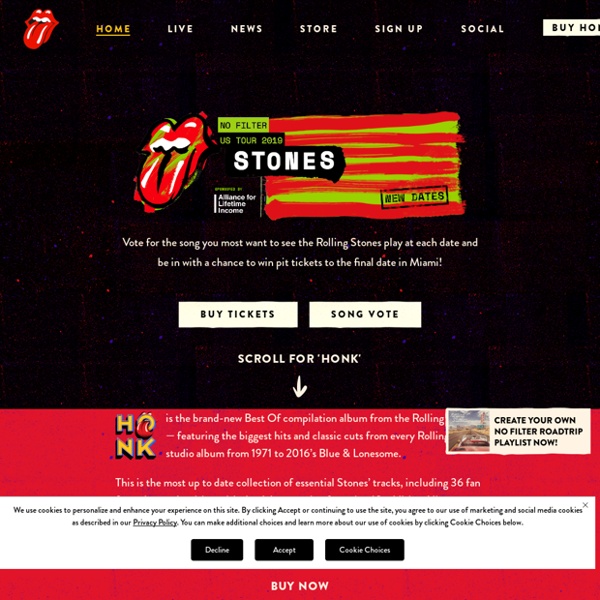 This photographic autobiography features images selected by the band accompanied by their own words. The photographers include Gered Mankowitz, Jean-Marie Périer, Dezo Hoffman, Michael Cooper, Terry O’Neill, Bent Rej and Philip Townsend – the photographer for their first ever shoot. "This is our story of fifty fantastic years. We started out as a blues band playing the clubs and more recently we’ve filled the largest stadiums in the world with the kind of show that none of us could have imagined all those years ago. Curated by us, it features the very best photographs and ephemera from and beyond our archives." Mick, Keith, Charlie & Ronnie

The Rolling Stones The band continued to release commercially successful records through the 1970s and selling many albums with Some Girls (1978) and Tattoo You (1981) being their two most sold albums worldwide. In the 1980s, a feud between Jagger and Richards about the band's musical direction almost caused the band to split but they managed to patch their relationship and had a big comeback with Steel Wheels (1989) which was followed by a big stadium and arena tour. Since the 1990s, new recorded material from the group has been both increasingly less well-received and less frequent. Despite this, the Rolling Stones have continued to be a huge attraction on the live circuit with big stadium tours continuing through the 1990s and 2000s.

The Rolling Stones: Crossfire Hurricane (2012) Torrents Standard Definition: This film is released as part of the ongoing 50th anniversary celebration of the Rolling Stones. It tells the story of the Stones' unparalleled journey from blues obsessed teens in the early 60s to their undisputed status as rock royalty. The Rolling Stones The Rolling Stones are a British rock band who rose to prominence during the mid-1960s. The band was named after a song by Muddy Waters, a leading exponent of hard-rocking blues. Song lyrics[edit] All songs written by Mick Jagger and Keith Richards, unless noted The Music of the Rolling Stones, 1962-1974 About the Course We will survey the music of the Rolling Stones, focusing on the stylistic development of the band over the 1962-74 period. The Stones arose out of the London blues revival scene of the late 1950s and early 1960s. Initially a cover band playing a mix of blues and r&b numbers, Jagger and Richards soon began writing their own music.

Rolling Stones concerts Since forming in 1962, the English rock band The Rolling Stones have performed more than two thousand concerts around the world, becoming one of the world's most popular live music attractions in the process. In their early years of performing, the band would undertake numerous short tours of the United Kingdom and North America, playing in small- and medium-size venues to audiences composed largely of screaming girls. As time moved on, their audience based expanded (in terms of both size and diversity) and they would increasingly favour larger arenas and stadiums. For many years, the group would choose to play North America, Continental Europe, and the United Kingdom on a three-year rotating cycle. The Beatles All-New Editions of The Beatles 1 Pair Beautifully Restored Promotional Films and Videos with Brand New Stereo and Surround Audio Mixes Beatles 1+ Deluxe Edition Celebrates the Sight & Sound of The Beatles in 50 Films & Videos London – September 15, 2015After The Beatles stopped touring, and because travelling around the globe to promote new releases was impossible, the band increasingly made what could be described as “mini movies”. These pioneering promotional films and videos helped to define the way we have come to watch music, not least because The Beatles approached filming with the same ease and innovative spirit they brought to the recording studio, exploring new creative possibilities with infectious delight. Showcasing the band’s filmed work to accompany their 27 No.1, U.K. and U.S. singles, The Beatles 1 is newly restored and expanded in multiple configurations for global release on November 6 by Apple Corps Ltd/UMG. It’s The Beatles, as you’ve never seen them before.

Stones Please Don`t Stop: Mick Jagger llega a la fiesta de Diane Von Furstenberg, el Sabado 21 de Febrero (FOTOS) Mick Jagger arriving at the Diane Von Furstenberg's party, on Saturday February 21 by John Smith THANKS Photos Exile on Main St. Exile on Main St. is a double album by English rock band The Rolling Stones. It was released on 12 May 1972 by Rolling Stones Records. The album's music incorporates rock and roll, blues, soul, country, and gospel genres.[2] Although it originally received mixed reviews,[2] Exile on Main St. has been ranked on various lists as one of the greatest albums of all time.[3] The 2010 remastered version of the album was released in Europe on 17 May 2010 and in the United States on 18 May 2010, featuring a bonus disc with 10 new tracks.[4] Recording[edit]

Do You Love MICK JAGGER?? Do You Love MICK JAGGER?? Then this Limited Edition "This Girl Loves MICK JAGGER” shirt is a MUST Have! BUY IT NOW and you'll own a collectors item. Each shirt is printed on super soft premium material. The Rolling Stones discography Albums[edit] Studio albums[edit] Live albums[edit] The World's most recently posted photos of bjd and mick Flickr Hive Mind is a data mining tool for the Flickr database of photography. Flickr Hive Mind is a search engine as well as an experiment in the power of Folksonomies. All thumbnail images come directly from Flickr, none are stored on Flickr Hive Mind. These photos are bound by the copyright and license of their owners, the thumbnail links take to you to the photos (as well as their copyright and license details) within Flickr. Because some other search engines (Google, etc.) index parts of Flickr Hive Mind, you may have been led here from one of them. Welcome to Flickr Hive Mind, almost certainly the best search engine for photography on the web.

List of best-selling music artists The claimed figures are referenced from online articles created by highly reliable sources. For clarity, the sources used, say the term "records" (singles, albums, videos) and not "albums". However, if all available sources for an artist/band say "albums", such sources are only used if the certified album units of the said artist meet the required percentage amount. Exhibitionism: The Rolling Stones Exhibition EXHIBITIONISM is the first international exhibition on The Rolling Stones. Taking over the entire two floors of the Saatchi Gallery with 9 thematic galleries, EXHIBITIONISM combines over 500 original Stones' artefacts, with striking cinematic and interactive technologies offering the most comprehensive and immersive insight into the band's fascinating fifty year history. From never before seen dressing room and backstage paraphernalia to rare instruments; original stage designs, iconic costumes, rare audio tracks and video footage; personal diaries; poster and album cover artwork; and unique wraparound cinematic experiences that celebrate every aspect of their Careers.