U~Z of our A-Z of Crystal Magic & Folklore. Lingham Natural Stone #11121. Smooth solid tube with rounded ends Lingham Natural Stone from India. It is also known as "Shiva Lingham", the correct name being "Narmadeshvara Lingham". The Lingham stone has a Jasper composition with impurities. It is said to be the "stone of the kundalini". According to the Eastern Indian philosphy, kundalini is the sleeping serpent which rest at the base of the spine, dwelling deep within the confines of one's being. It serves to activate the movement of the sacred energy which is slumbering within the self. Rock Star Crystals. Gem stone and crystal healing, love symbols, totems, gemstone beads. 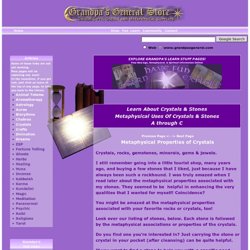 I still remember going into a little tourist shop, many years ago, and buying a few stones that I liked, just because I have always been such a rockhound. I was truly amazed when I read later about the metaphysical properties associated with my stones. They seemed to be helpful in enhancing the very qualities that I wanted for myself! Easy Crystal Magick. Crystal or stone magick is very simple and inexpensive to perform. 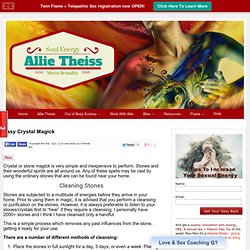 Stones and their wonderful spirits are all around us. Any of these spells may be cast by using the ordinary stones that are can be found near your home. Cleaning Stones Stones are subjected to a multitude of energies before they arrive in your home. Prior to using them in magic, it is advised that you perform a cleansing or purification on the stones. This is a simple process which removes any past influences from the stone, getting it ready for your use. A~E of our A-Z of Crystal Magic & Folklore.

Crystals & Minerals. Herkimer Diamond Mines And KOA Kampground. Top 7 Places to Go Gem Hunting On Your Next Family Vacation. By Jamie Pearson www.TravelSavvyMom.com Got a rock hound in the family? 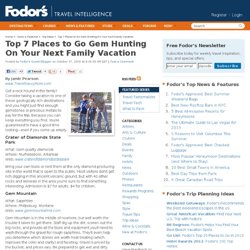 Consider taking a vacation to one of these geologically rich destinations and you might just find enough gemstones or precious metals to pay for the trip, because you can keep everything you find. You're guaranteed to have a good time looking—even if you come up empty. Crater of Diamonds State Park What: Gem quality diamonds Where: Murfreesboro, Arkansas Web: www.craterofdiamondsstatepark Bring your own tools or rent them at the only diamond-producing site in the world that is open to the public.

Gem Mountain What: Sapphires Where: Philipsburg, Montana Web: www.gemmountainmt.com Gem Mountain is in the middle of nowhere, but well worth the trouble it takes to get there. Herkimer Diamond Mines. Rock Identification: Introduction. Rock Key. The Rock Identification Key - by Don Peck Rock Key Table of Contents What Are Rocks? Rocks are what the crust of the earth is made of. They are the mountains and the bottom of the ocean. 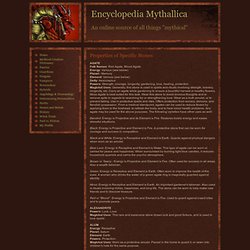 Carry an agate while gardening to ensure a bountiful harvest or healthy flowers. Moss Agate is best suited for this task. Wear this stone to avoid envious thoughts and to remove spite in regards to searching for or strengthening love. Wear as a truth amulet, or to prevent falling. Use in protective spells and rites. Banded: Energy is Projective and its Element is Fire. Black: Energy is Projective and Element is Fire. Black and White: Energy is Receptive and Element is Earth. Spirit Of ISIS Crystal Shop - Crystals, Minerals, Fossils. Petrified Wood Legends, Mysticism and Science. Mystical Properties: Most often associated with helping recall past lives . Also associated with Akasha , or the universal record, an ethereal library, so to speak, of everything that has and will ever occur.

Trees are thought to be the wisest and most balanced of all beings on the planet, for their branches reach high toward the heavens, while their roots sit firmly in Mother Earth. Crystal Healing: Magical Cure or Just a Rock? Dr. 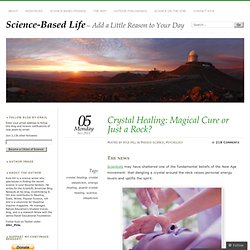 Christopher French, a psychologist at Goldsmith’s College, London, set out to test the effects of crystals on 80 volunteers. Half were given a genuine New Age crystal for a few minutes while meditating. The rest were asked to handle a cheap plastic fake, but were told that it was the genuine article [control and blinding]. The volunteers were also primed to notice any claimed effects from the crystals, with the researchers telling them that they should experience any number of benefits [the suggestion].

Crystal power. Crystal Magic - Crystaline Vision. Crystal healing is the practice of using the subtle energies of crystals and gemstones to heal, energize and protect on all levels of influence. 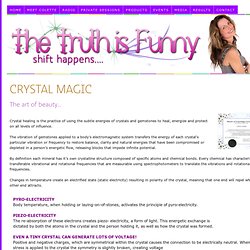 The vibration of gemstones applied to a body’s electromagnetic system transfers the energy of each crystal’s particular vibration or frequency to restore balance, clarity and natural energies that have been compromised or depleted in a person’s energetic flow, releasing blocks that impede infinite potential. By definition each mineral has it’s own crystalline structure composed of specific atoms and chemical bonds. Every chemical has characteristic, transferable vibrational and rotational frequencies that are measurable using spectrophotometers to translate the vibrations and rotational band frequencies. Changes in temperature create an electrified state (static electricity) resulting in polarity of the crystal, meaning that one end will repel while the other end attracts. Natural Crystals. Gemstone Massage Wand.