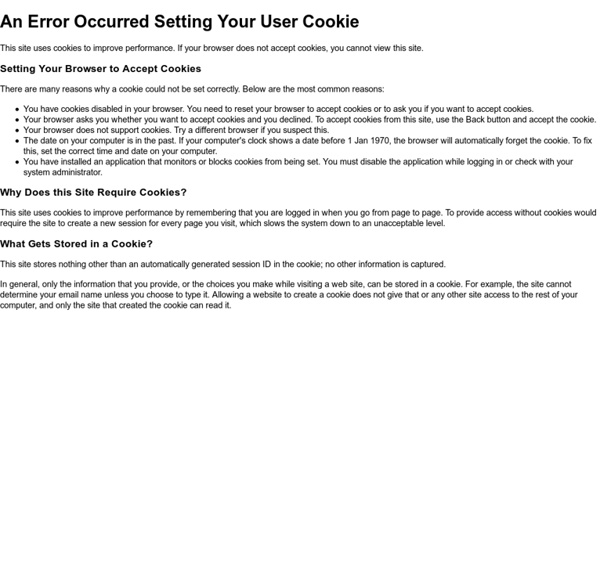 This site uses cookies to improve performance. If your browser does not accept cookies, you cannot view this site. Setting Your Browser to Accept Cookies There are many reasons why a cookie could not be set correctly. You have cookies disabled in your browser. Why Does this Site Require Cookies? This site uses cookies to improve performance by remembering that you are logged in when you go from page to page. What Gets Stored in a Cookie? This site stores nothing other than an automatically generated session ID in the cookie; no other information is captured. In general, only the information that you provide, or the choices you make while visiting a web site, can be stored in a cookie.

National Cancer Informatics Program — NCIP NCIP Launch Meeting Attendees — NCIP The NCIP Open-Development Initiative The NCIP is committed to improving biomedical informatics through broad community participation. To this end, NCIP has deposited a large volume of open-source code for biomedical informatics software applications to GitHub , a widely used code-hosting site. GitHub allows community developers to easily access and modify the code for applications of interest, and to contribute these modifications back to the primary repository for broader community dissemination. Most of these projects are available under the standard BSD 3-clause license to encourage both open-source and commercially viable derivatives of these projects. The NCI Biomedical Informatics Blog The NCI Biomedical Informatics Blog provides a forum for the exploration of ideas and knowledge sharing across the NCI and throughout the wider biomedical-informatics and cancer-research community. Wikis Events Archive > News Publications

SCOTUS: Individual mandate is a tax, constitutional In a stunning blow to opponents of the Affordable Care Act, the Supreme Court today ruled in a 5 to 4 vote that the most reviled portion of the health reform law – the so-called individual mandate requiring all Americans to buy health insurance or face a fine – is constitutional, since it falls within the power of Congress to impose a tax. In what was a surprise to many court watchers, the deciding vote to uphold the individual mandate came from Chief Justice John Roberts, instead of the more center-leaning Justice Anthony Kennedy. In rendering the decision the court did find the individual mandate to be unconstitutional when viewed through the lens of the Interstate Commerce clause, but that finding became moot once five of the jurists concluded that the fine levied against those individuals who refused to comply is a tax. "The Affordable Care Act's requirement that certain individuals pay a financial penalty for not obtaining health insurance may reasonably be characterized as a tax.

patient generated data My son’s high school graduation trumped going to D.C. this week, so I couldn’t atend the Health Data Initiative Forum or ONC’s Patient Generated Data Public Forum. Yesterday I was able to hear some presentation at the ONC panel. There’s a white paper by RTI and written testimony of the Patient Generated Data (PGD) speakers here. Anyone pumped about PGD wants to change the culture of care AND disrupt electronic record design & development. I’ve written before about Data Generación! – the complement to sharing all data in the EHR….allowing direct contribution by patients & families. One of the best comments was by Nikolai Kirienko, Project Director at Crohnology.MD, a Project Design effort at the University of California, Berkeley: We, the people providers call patients, most often navigate care by voice. Nikolai continued, “Patients are a vital source of knowledge, not always included in the medical record. ONC did a nice job at this early stage. Like this: Like Loading...

The 8th Pillar of the Patient Centered Medical Home | On Health Care Technology The Patient Centered Medical Home (PCMH) model of care is built on seven principles. Seven is a lucky number in some cultures, but if you ever tried to stand something up on seven legs, you probably know that eight is better and sturdier. The medical home is missing a pillar, and strangely enough the missing pillar is the very reason why the concept was originally proposed. The seven principles of the PCMH were jointly formulated by the primary care medical societies in 2002 to describe the characteristics of a PCMH practice, and consist of a personal physician, physician directed medical practice, whole person orientation, coordinated and/or integrated care, quality and safety, enhanced access and appropriate payment. So what are we missing? Back in 1967, the American Academy of Pediatrics (AAP) introduced the term “medical home” realizing that fragmented and incomplete medical records are an impediment to proper care for children with chronic conditions:

Blog I am not a US citizen, so I can’t officially react to the latest news from the US patient access front nor put my opinion on the “protest page“. What is going on. First see this post from the Healthcare IT News and following see the post my friend e-Patient Dave wrote about it. When Dave wrote me a short mail about it, I decided that I should write this post. When I read the position of the AHA on patient record access I was shocked. The fact that the AHA now says that it is not feasible to deliver in such a short notice and that they need 30 days is unbelievable. “Here’s what that means, specifically: when you or a relative is discharged from the hospital, instead of giving you your information promptly – to inform and empower good home care – they want to be allowed to spend that whole month gathering the information that might let you prevent readmission.” Lodewijk Bos President ICMCC

Summer is for Standards Over the past two weeks we've heard about at least five different new S&I Framework projects: Health eDecisions, Closed Loop Referrals (see Scenario 1), HREx, Auto BlueButton, and Patient Generated Health data. Not all of these are yet "officially" announced projects on the S&I Framework site. On top of that, there are a half dozen HL7 projects that are being worked on concurrently that support some of the existing projects (e.g., Query Health), and others which could support new projects. This is a recent set of project scope statements that were recently approved by the Structure and Semantic Design Steering Division for the HL7 Structured Documents Workgroup (which had already approved them). Some of these projects (such as HQMF Release 2) are already well under way. HL7/IHE Health Story Implementation Guide Consolidation – additional templates for patient assessment data, at Project Insight # 728 for SDWG and TSC Tracker # 2305.

What User Authentication to use? This question is the first topic for the new RESTful-Health-Exchange (RHEx) workgroup that is starting under the S&I Framework 'affiliation'. I don't know what it means to be 'affiliated with S&I Framework, but it is clear from the way it is put in a different place that it is not like other workgroups. One thing is that they seem to be using google groups and doing more discussions in e-mail. I think this is a plus as it helps the group take care of simple discussions through e-mail. It also has a cool acronym. Specifically the question I responded to was: "What is the reasoning behind using OAuth and/or OpenID instead of PKI/certificates? There are many different solutions, proving the space is rich with imperfect solutions. PKI (Public Key Infrastructure) is the workhorse of Security technology, made up primarily of X.509 certificates and the infrastructure used to prove that certificate should be trusted. I prefer SAML, but do agree that OAuth is magical.

What User Authentication to use? This question is the first topic for the new RESTful-Health-Exchange (RHEx) workgroup that is starting under the S&I Framework 'affiliation'. I don't know what it means to be 'affiliated with S&I Framework, but it is clear from the way it is put in a different place that it is not like other workgroups. One thing is that they seem to be using google groups and doing more discussions in e-mail. I think this is a plus as it helps the group take care of simple discussions through e-mail. It also has a cool acronym. Specifically the question I responded to was: "What is the reasoning behind using OAuth and/or OpenID instead of PKI/certificates? There are many different solutions, proving the space is rich with imperfect solutions. PKI (Public Key Infrastructure) is the workhorse of Security technology, made up primarily of X.509 certificates and the infrastructure used to prove that certificate should be trusted. I prefer SAML, but do agree that OAuth is magical.

6 reasons today's heath IT systems don't integrate well Although the healthcare community has been clamoring for integration of its IT systems for decades, the industry is still in a rather elementary stage when it comes to useful and practical systems integration, according to Shahid Shah, software analyst and author of the blog The Healthcare IT Guy. "Our problem in the industry is not that engineers don’t know how to create the right technology solutions or that somehow we have a big governance problem," he said. "[Although] those are certainly issues in certain settings, the real cross-industry issue is much bigger – our approach to integration is decades old [and] opaque, and [it] rewards closed systems." Shah outlines six reasons today's health IT systems don't integrate well. 1. They don’t support shared identities. 2. [See also: 5 technologies every hospital should be using.] 3. 4. 5. [See also: 5 stages of EHR maturity and patient collaboration.] 6.

Convergence: CEDD, CIMI, IHE, FHIR, hData, HL7, mHealh and ONC @motorcycle_guy @Fridsma RE "How do all the (CEDD, CIMI etc) models fit together?" < looking 4 an answer - do we have 1 yet? #siframework — Thomas Lukasik (@Sparkenstein) June 8, 2012 How does it all fit together? If you've been following CIMI, HL7's CDA Release 3, FHIR, and mHealth Workgroup initiative, ONC's many S&I Framework projects, IHE's mHealth profile and all the other standards activity going on, surely you've run into the problem shown below: The volume of the information stream coming out of these projects is huge. Content Knowing the history behind things helps. The CIMI work is informed by work in HL7 on Detailed Clinical Models, as well as work in ISO, and in OpenEHR. FHIR will be creating resources for many of the very things that CIMI will be creating "detailed clinical models" for. Transport On the transport side, we have the IHE mHealth Profile based in part on, and being harmonized with hData. On the document side, it isn't clear whether CDA or FHIR will win out.