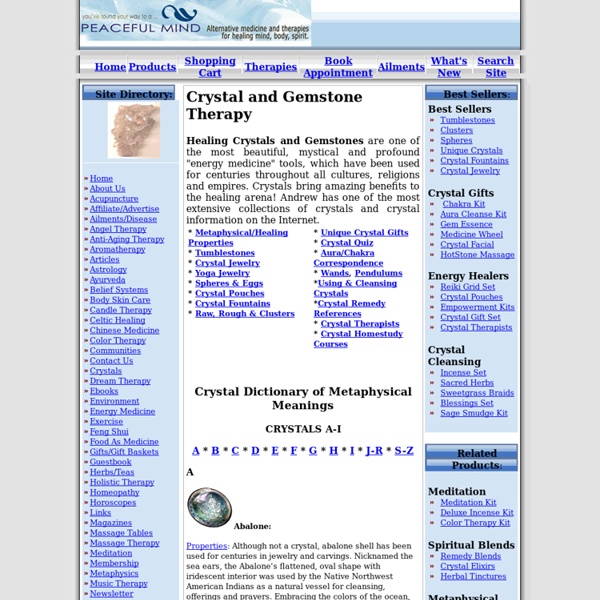 Properties: Although not a crystal, abalone shell has been used for centuries in jewelry and carvings. Nicknamed the sea ears, the Abalone's flattened, oval shape with iridescent interior was used by the Native Northwest American Indians as a natural vessel for cleansing, offerings and prayers. Embracing the colors of the ocean, the shell displays iridescent colors in its blues, greens, purples and yellows. This unique shell embodies all the aspects of the water element including love, beauty, gentleness, caring, comfort, peacefulness, delight and solace It is soft to the touch from repeated tumbling in the sand and water. Abalone is useful for handling and calming emotional situations and is very soothing to the mind/body. When working through any emotional situation, have abalone nearby as it is believed to be beneficial and promotes cooperation. Feng Shui: Use in the Center area for grounding, balance, good health, spirituality and a sense of peace. Agate: Black/Banded Agate: Botswana:

Rock Types "Colour: Grey or pink but with dark streaks and layers. Texture: Medium- to coarse grained. Characterized by discontinuous, altering light and dark layers, the former usually having a coarsely granular texture while the latter, which often contains mica, may be foliated. Structure: In addition to the gneissose texture described above, gneisses tend to be banded on a large scale with layers and streaks of darker and lighter coloured gneiss. Mineralogy: Feldspar is abundant and, together with quartz, forms the granular, lighter coloured layers. Field relations: At the highest grades of metamorphism rocks may approach melting temperature when they are able to recrystallize freely and so produce the textures characteristic of gneisses.

Crystals Azeztulite is among the highest vibrations in the Mineral Kingdom. It has been said that it stimulates the three 'ascension points', at the base of the spine, the middle of the abdomen, and the center of the brain. These points are believed to be important for people choosing to consciously enter higher vibrational realms while in the physical body. Azeztulites are stones which have been engineered etherically to carry the energies and communications of a group soul called the' Azez'. According to their channelings, the Azez, who are here in non-physical form, station themselves underground in power spots such as Sedona's Cathedral Rock and California's Mt Shasta, bringing to Earth a positive energy that they call `the nameless light", which assists planets and people in transitioning to higher frequencies. The stone Azeztulite is said to be their special conduit for this energy.

Minerals and Gems More than 4,000 naturally occurring minerals—inorganic solids that have a characteristic chemical composition and specific crystal structure—have been found on Earth. They are formed of simple molecules or individual elements arranged in repeating chains, sheets, or three-dimensional arrays. Minerals are typically formed when molten rock, or magma, cools, or by separating out of mineral-rich water, such as that in underground caverns. Rocks themselves are made of clusters or mixtures of minerals, and minerals and rocks affect landform development and form natural resources such as gold, tin, iron, marble, and granite. Silicates—including quartz, mica, olivine, and precious minerals such as emeralds—are the most common class of minerals, as well as the major components of most rocks. Gemstones Many minerals form beautiful crystals, but the most prized of all are gemstones. Historically gems have been divided into precious and semiprecious classes.

Kim Kardashian News and Photos | Perez Hilton We’ve seen people get plastic surgery to physically look like the Kardashians, but what if you could dress like them too?? Not only is it significantly less expensive, it’s pain-free too! And with Khloe, Kim, and Kourtney’s different styles, it’s easy to pick your fave. Or even mix and match! Take Kimmy for example… Anything that shows off her very breast assets is a must-have! Though one thing we've learned from Kim is that she only rocks neutrals and dark colors. A little black dress, gold sandals (like this affordable pair HERE), and sleek locks, and you're basically good to go. All right… ready for Kourt and Khloe? Homepage | Shakira Josh Brolin says joining ‘Sin City 2’ was never just black and white - Knoxville.com Story HOLLYWOOD — Josh Brolin enters the dark, sexy world of Frank Miller's and Robert Rodriguez's "Sin City: A Dame to Kill For," as a private investigator who comes face to face with the woman (Eva Green) who broke his heart, sending him on an alcohol-fueled spiral four years earlier. He instantly falls back under her spell, even though he instinctively knows she's bad news. The Dwight McCarthy character he plays is the same one played by Clive Owen in the original 2005 crime drama based on Miller's bullets and babes-filled graphic novels. Miller, who created the popular graphic novels and co-directs the sequel with Rodriguez as he did with the first, describes Dwight as a metaphorical figure. "He's the character that changes the most over time in ‘Sin City,'" he says. When Ava Lord (Green) begs Dwight to save her, he feels compelled to become her protector again, even though it means putting his own life at risk. Q: Did you go back and watch the original "Sin City"? Brolin: Yeah.

Fall / winter 2014 fashion trends Fashion trends: whether you want to follow them, ignore them, or rebel against them entirely, the one thing you can’t do is deny their existence. They are alway there, always influencing and always evolving. It’s our position that there are no set rules or laws that govern the realm of fashion. There’s nothing you must buy or must do, and there’s certainly nothing – ever – that you absolutely cannot do. If you love something, wear it, and that goes for whether it’s a trend fresh off the runways or not. The fall / winter 2014 fashion trends are no different. This page will be updated with more soon, so do subscribe to our newsletter or follow us on Facebook if you want to keep in the loop with future updates on what’s happening in fall 2014. Punk fashion According to forecasting agency Trendstop, punk fashion will continue to evolve into the fall of 2014, with “styles that preserve a subversive undercurrent” prevailing on the street. Punk fashion as seen on the Fall 2013 runways Moto theme

How To Get The Undercut Hair Style Without Shaving Your Head (PHOTOS) For the past two months, I've wrestled with the idea of letting my hair stylist shave off my Afro into a buzzcut like the one we spotted on this gorgeous model in Soho. Discovering that I have a weird-shaped head underneath my thick curls has stopped me from making such a dramatic transformation. But I'm considering easing into it with a faux undercut. Worn by rebellious teenagers and rockers during the '80s and '90s grunge era, the undercut hairstyle (shaved or shorter hair on the sides and longer on top) has had more glamorous reinterpretations in recent decades thanks to Kelis, Rihanna and Cassie. TRESemmé celebrity stylist Jeanie Syfu also mimicked the shaved undercut for Charlotte Ronson's fall 2011 show. Step 1: Make a deep side part extending just past the ear and section off a diagonal portion toward the back of the head, separating the top portion with a clip.Step 2: Apply mousse to the bottom section and blow dry back, pulling hair to one side using a boar-bristle brush.

Pink Hairstyles Today, I’ve decided to talk about the hairstyles of one of the most creative, wowing, fun, hot and sexy American singers, Can you guess who she is??!!.. You can’t!!, then she is “Pink”… Pink is one of the most famous American celebrity with her sweet voice beside having a great shocking and high attitude look!. Pink is one of the stars or of the women who can make her hair obeying her in anything she wants.. Pink has made the whole world thinking that she’s using her hair like she’s using her guitar or microphone!!.. You can see that by yourself from her picture or from her appearance on any red carpet, on the stage or in any event. Share on Facebook Tweet