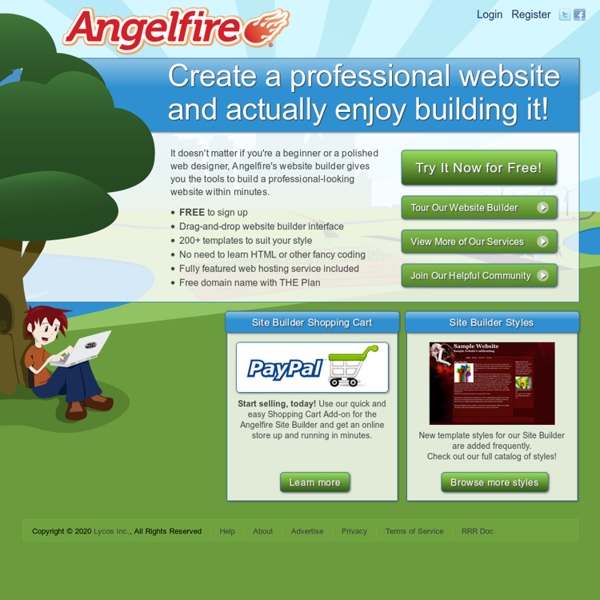 Dream Infinity Studios / Chris Takakura These Photoshop tutorials cover wide range of topics from basics of using layers, cutting out objects from backgrounds, saturation and hue to photo abstractions, special effects for digital art work, to creating typographic effects. This page also features video tutorials from the official Dream Infinity Studios YouTube Channel. Beginning Basic Tricks in Photoshop Using the Hue and Saturation control in Photoshop. The Most 10 Common Mistakes Web Designers Make Aug 03 2009 There are plenty of mistakes web designers (especially new ones) make when designing websites. Everything from poor design to simple oversight happen every day. But with a little diligence, they can easily be avoided. Below are ten of the most common mistakes web designers make, along with examples of sites who do things right. Some of these are easy to correct if you’re aware of, others might take a bit more time.

The Rolling Stones: Crossfire Hurricane (2012) Torrents Standard Definition: This film is released as part of the ongoing 50th anniversary celebration of the Rolling Stones. It tells the story of the Stones' unparalleled journey from blues obsessed teens in the early 60s to their undisputed status as rock royalty. All of the Stones have been newly interviewed and their words form the narrative arc that links together archive footage of performances, news coverage, and interviews, much of it previously unseen. Taking its title from a lyric in "Jumpin' Jack Flash," this film gives the viewer an intimate insight into exactly what it's like to be part of the Rolling Stones as they overcome denunciation, drugs, dissensions, and death to become the definitive survivors. Over a year in the making and produced with the full cooperation and involvement of the Stones, this film is and will remain the definitive story of the world's greatest rock 'n' roll band

Learn Fireworks/Code › qrayg.com Learn advanced Adobe Fireworks tutorials that can help you better understand how to make your site more visually appealing. These tutorials were written for users who have a very strong understanding of Fw. Learn advanced HTML, CSS and JavaScript tricks to help you add more interactivity and productivity to your web site. The Codeless Website: Four Awesome Tools for Creating Cool, No-Tech Sites Sometimes, even HTML is just too hard. In this postmodern world, we're all professionally fragmented jacks of all trades, and few of us have the patience (read: OCD) for learning enough CSS and Flash to allow us to keep up with the Jonses in terms of functional, sexy web design. Here are some cheat sheets, the Cliff Notes of site creation, if you will. Read on to discover four awesome, in-browser resources for creating your own beautiful corner of the web without the horror of code. Edicy: Sites in Seconds

The Music of the Rolling Stones, 1962-1974 About the Course We will survey the music of the Rolling Stones, focusing on the stylistic development of the band over the 1962-74 period. The Stones arose out of the London blues revival scene of the late 1950s and early 1960s. Enterprise Open Source Consulting New Stylesheet Switcher. I'm trying to use the DOM and Javascript to come up with a new stylesheet switcher for this site. Currently, I use Javascript to read a cookie and do a bunch of document.write's to write out the full <style type="text/css">...</style> code. However, I should be able to use the following to simply replace the <style> tag's contents. However, it doesn't work in IE5/Mac :-(.

10 Video Tutorials for Learning Basic Web Design Skills Some people can read instructions on how to do things and can immediately go out and do them without any problems. But others need to see things done before they fully grasp how to do them. This is fine if you know someone who can show you how to do things, but if you don't, it's a little harder. Enter the video tutorial. It shows you right on your computer screen how to do just about anything you want.

Tutorial Lounge  In this Photoshop tutorial, we will be Space City Photo Manipulation in Photoshop. We show another space world in this photo montage tutorial. In this process, everyone can create such amazing photo editing using different images to get such amazing result. We will learn all the important techniques of In this tutorial, we will learn how to Create a Abstract Space girl Photo Manipulation using Photoshop.We will learn some advance techniques of masking and lightning.